Tens of thousands of demonstrators took to the streets on Friday in more than 50 cities and towns across Colombia to protest a surge of lethal attacks on indigenous, Afro-Colombian and environmental leaders in recent years. Solidarity marches were held in dozens of cities around the world, from Mexico City to Athens. In 2016, the Colombian government and FARC rebels signed a historic peace accord to move the country forward after a half-century of armed conflict. But since then, nearly 500 human rights activists, many from the Afro-Colombian community, have been killed, targeted for their work combating illegal mining, drug trafficking, and land restitution and environmental causes. Friday’s protests came after a heartbreaking video went viral showing the child of renowned community activist, María del Pilar Hurtado, screaming and crying after witnessing a gunman shoot down his mother. We speak with Luis Gilberto Murillo, former governor of the Colombian department of Chocó and former Colombian minister of environment and sustainable development.

AMY GOODMAN: On Friday, tens of thousands of demonstrators took to the streets in more than 50 cities and towns across Colombia, as well as in the United States, to protest a surge of lethal attacks on indigenous, Afro-Colombian and environmental leaders in recent years—solidarity marches around the world, from Mexico City to Athens. In 2016, the Colombian government and FARC rebels signed a historic peace accord to move Colombia forward after a half-century of armed conflict. But since then, nearly 500 human rights activists, many of them Afro-Colombian community, have been killed, targeted for their work combating illegal mining, drug trafficking, and land restitution and environmental causes. During Friday’s mass mobilizations, protesters carried signs reading “Without leaders, there can be no peace” and “No more bloodshed.” This is activist Gloria Cuartas.

GLORIA CUARTAS: [translated] Stop with the selective and systematic murder of activists, of men, of women, of indigenous people, of Afro-Colombians, farmers and students, who are defending the right to live on their territories, for the right of biodiversity to be respected, for the peace agreements to be respected.

AMY GOODMAN: Friday’s protests came after a heartbreaking video went viral showing a young boy screaming inconsolably moments after witnessing a gunman shoot down his mother. The child’s mother was the renowned community activist, María del Pilar Hurtado, who advocated for the rights of landless peasants. She was killed in the northern province of Córdoba last month. In the video, the child can be seen screaming in grief near his mother’s corpse.

For more, we go to Washington, D.C., where we’re joined by Luis Gilberto Murillo. He served as governor of the predominantly Afro-Colombian department of Chocó. And in 2012—Murillo was the minister of environment and sustainable development in Colombia from 2016 to 2018, under the previous president. He’s currently a research fellow at the Center for Latin American and Latino Studies at American University and was one of those who was protesting outside the Colombian ambassador to the United States’s home in Washington, D.C.

Luis Gilberto Murillo, thank you so much for joining us. Can you explain why you were out in the streets Friday, and so many were out in your country of Colombia, protesting the deaths of more than 400 activists in Colombia over the last few years?

LUIS GILBERTO MURILLO: Good morning, Amy, and thank you for this opportunity.

Obviously, all Colombians went to the streets, a majority of them last July 26, including here in Washington, where, under the leadership of the Colombian Human Rights Committee here in Washington, we went to express our really sorry at—because of this tragedy of the killings of social leaders in Colombia. This is something that needs to move not only Colombia, but the entire international community.

Most of the leaders that have been killed are social leaders, environmental leaders, community leaders, rural leaders that are really fighting for their rights. And what happened to María del Pilar Hurtado really moved the country. And we all went to the streets to really say that we are supporting these leaders, we are in solidarity with social leaders, and against the assassinations, and also calling for the consciousness of Colombian society and the international community.

AMY GOODMAN: Who is killing the activists, the social leaders, the environmentalists? The right-wing president of Colombia, President Iván Duque, claims the numbers of murders have dropped. We’re talking about more than 400 in the last few years, since the peace accord was signed.

LUIS GILBERTO MURILLO: Well, what we are—people that are being killed are being killed because they are demanding their basic rights, in particular, the rights to access to land and to be free in their territories, because if you—it’s only one number, Amy, about what is happening in Colombia, particularly in terms of inequality. In Colombia, 1% of big landowners have like 50% of the land. Only 70% of the entire rural land in Colombia belongs to 0.4% of productive units, while units that are very small only have 2% of the rural lands. So, the inequality is very high. This is only one example of it. So, these leaders are demanding access to land, for example. And they are being killed for those who want to maintain in Colombia the status quo in rural areas, to maintain huge land ownership and to avoid these Colombians to have access to land and basic services, as I said.

AMY GOODMAN: Can you talk about the role of the United States in its support for the Colombian government? And this goes back a ways, not just under Trump. The role of the U.S. and also U.S. corporations? You have been particularly concerned about Duque defending the use of Monsanto herbicide, Roundup Ready, to destroy coca crops.

And it’s not effective. It’s not effective, because in 2006 and 2007, when the fumigation was widespread, Colombia fumigated areas of the size of Rhode Island, the state of Rhode Island in the United States, and coca, instead of decreasing, coca cultivation increased. And also to eradicate one area of coca, you need to fumigate around 25 hectares of coca. So, it’s not really effective. This is very costly. So we think that in that regard, the inclination of the United States to support aerial spraying and aerial fumigation with Roundup is wrong.

AMY GOODMAN: And, of course, Roundup and Monsanto are facing massive lawsuits in the United States around people getting sick using Roundup Ready herbicides. Can you talk, from Colombia to Jair Bolsonaro’s Brazil right now, as he threatens to—and what effect this has on the people of Colombia, as well—slashing protections for the Amazon, his efforts to curtail—his efforts to fight illegal—to fight against illegal logging [sic], etc.?

AMY GOODMAN: Or, I should say, he curtailed efforts to fight illegal logging.

LUIS GILBERTO MURILLO: Well, it’s like, the Amazon is very important not only for Brazil and for the countries like Colombia that are part of the Amazonian Basin, but also it’s important for the entire world. It’s key—it’s key to fight climate change. And also, in addition to that, we are talking about areas that have a tremendous biodiversities, the most biodiverse area in the world.

In terms of Colombia, obviously deforestation is a huge challenge—and not only for Colombia, for Peru and for Brazil. Colombia was able, because of the measures that were taken by the government to decrease deforestation in 10% last year.

However, in Brazil, the policy is very different. Bolsonaro is a denier of climate change, and members of his Cabinet. And they are promoting a policy to increase the exploitation, increase the timber and logging in the Amazon Basin. And that’s creating, obviously, a climate for increasing dramatically deforestation in the Amazon. And this is very irresponsible for the entire region.

And also, in addition to that, what we see is that he is obviously weakening the implementation of measures to protect the rights of ethnic minorities, of indigenous communities, of Afro-descendant communities in their quilombolas, that are key to protect that vital ecosystem for the entire world.

AMY GOODMAN: And finally, in this last minute we have, I have to admit, it was a little hard to get in touch with you yesterday afternoon, Luis. I don’t know if it was because of what was happening in Paris, but 22-year-old Egan Bernal has become the first Colombian to win the Tour de France. He’s the youngest rider to win the race in 110 years. This is what he said.

EGAN BERNAL: [translated] It’s incredible. It’s incredible. I don’t know what to say, really. Yes, I won the tour, but I still don’t believe it. It is just unbelievable. I think I need a couple of days for it to settle in.

AMY GOODMAN: According to the BBC, “Bernal’s victory has resonated especially with Colombians from modest backgrounds, many of whom are from the same deprived, largely indigenous areas of Colombia’s Andes mountains.” The significance of his win, Luis?

LUIS GILBERTO MURILLO: Well, we are very happy. We’re celebrating it the entire day, because, you know, it’s incredible, as he said. And Egan is a role model for the entire community in Colombia, but particularly for our communities, those for indigenous, Afro descendants, for rural communities, what we call the other Colombia, that really is—have the hope to be integrated. And also, many children and youth see now Egan as their role model to show that the only like limit that they have is the sky. And they will face obstacles, but it is possible. He made this possible. And the entire Colombia is celebrating. And this is a moment of pride for Colombia and for the entire Latin American region. So, we are really very happy and still celebrating.

AMY GOODMAN: Well, Luis Gilberto Murillo, we thank you so much for being with us, twice governor, also former minister of environment and sustainable development in Colombia, former governor of the predominantly Afro-Colombian department of Chocó. And that does it for our show. He was outside the Colombian ambassador to the United States’ house on Friday, along with so many others, and thousands throughout Colombia protesting the murders of activists in Colombia. I’m Amy Goodman. Thanks for joining us. 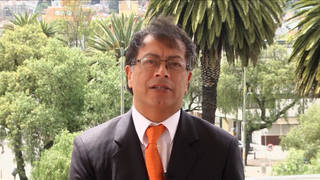