Climate youth activist Nasratullah Elham of Afghanistan was invited to participate in the first-ever U.N. Youth Climate Summit, but the United States rejected his visa. He breaks the sound barrier to join us from Phuket, Thailand, where he is a 12th grade student, and says his activism is based on the crisis’s impact on his home country. “The poor people there are very badly affected in a situation [where] they do not really have much carbon emissions,” he says.

ARAMISA BARBOSA RIBEIRO: [translated] My territory in Brazil is in the dry highlands of the Cerrado. Even the young can see this highland disappearing, and our native plants are dying due to lack of water. If it goes on like this, 20 years from now my homeland will become a desert. My people will be at risk of becoming history. Right now the Amazon, home to millions of my relatives, is burning.

On Wednesday afternoon, Greta Thunberg tweeted in support of youth climate activists who were still attempting to get into the United States. She tweeted, “I hear from different sources that many youth climate activists traveling to the UN Youth Climate Summit have not been given US visas in time for their travel. If you could start to interact under this tweet, maybe journalists and others can help you speed up the process.” That’s what Greta Thunberg tweeted.

Well, breaking the sound barrier today, we are joined, by Democracy Now! video stream, by Nasratullah Elham, a climate youth activist from Afghanistan who was invited to participate in Saturday’s first-ever U.N. Youth Climate Summit, but the U.S. just rejected his visa. He is a 12th grade student at the United World College’s Thailand International School in Phuket, Thailand, where he’s the leader of local sustainability programs. He’s from Laghman, Afghanistan. He just learned that this happened.

Welcome to Democracy Now! It’s great to have you with us. Nasratullah, tell us what happened.

NASRATULLAH ELHAM: Thanks for having me on Democracy Now! So, on August 28, that was the date when I got an invitation letter from the United Nations that I was invited to participate in the — as under 18, participate in the United Nations Youth Climate Summit on 21st September. I applied the U.S. visa on September 9th. I had my interview in the U.S. Embassy in Bangkok at the early morning, around —

AMY GOODMAN: You had to fly to Bangkok from Phuket just to apply?

NASRATULLAH ELHAM: Yeah, I flew from Phuket to Bangkok with a U.S. citizen teacher from my school. He accompanied me there to Bangkok to apply for the visa. And my interview appointment was 7 a.m., pretty early, and so in order to get there, we spent a night there in a hotel. And then, during the interview, the visa officer in the embassy didn’t ask me much questions, but a few questions of what I’m doing here and where my family lives and what do they do and what I’m going to do in the future. And then he made a very quick look at my documents, which was superquick, and told me that I do not qualify for the visa.

AMY GOODMAN: And so, you were — how many students applied to be part of the U.N. Youth Climate Summit?

NASRATULLAH ELHAM: The information that I had from the United Nations, the organizing team of the climate summit — I don’t really know about the exact number, but they said that over 7,000 applicants had applied to participate.

NASRATULLAH ELHAM: And I was —

AMY GOODMAN: And you were the one who was chosen.

NASRATULLAH ELHAM: Yeah, as an under 18 applicant. Yeah.

AMY GOODMAN: Tell us about your home country of Afghanistan and why you’re so concerned about it right now. What has made you a climate activist?

NASRATULLAH ELHAM: So, the climate activism started when I, last year — not last year, but like last academic year, I would consider, in 2019, the floods hit the western Afghanistan, and more than hundreds of families were evacuated. And most of those families were the nomadic people of Afghanistan, who heavily rely on — whose economic source heavily rely on livestock. All their livestock were lost. Their shelters were lost. According to sources, 35 lives were lost. And that made me concerned with the reason and cause of the flood, because I was not the one agreeing the traditional view held by the Afghan people about the flood.

And taking environmental science as one of my subjects was another factor that helped me not just to understand how the climate works and how sustainability works, but to make me even more inspired and to have a voice about this issue that’s happening, that’s hitting my country. And the poor people there are very badly affected, in a situation that they do not really have much carbon emission and very low ecological footprint. Like, without having scientific tools, just by the interview I had there, just the visits I had to the local areas and villages in Afghanistan, by the very primary information, I could say that their ecological footprint and the carbon footprint was way low, way lower than one, whereas the sources — online sources say that it’s 0.78. But what I could presume is that even lower, whereas in the developed countries — let’s take some European countries — have more than 14, with the United States as having more than eight. But when it comes to the impact, it’s mostly hitting those poor people in those areas that they do not really contribute to this problem.

AMY GOODMAN: And the U.N. was going to pay for your trip here and also your stay here. The visa denial you got wasn’t even signed. I was listening to a report in Thailand about the denial, and they said somewhere on that denial was the date 2014 — not signed, and a date from years ago.

NASRATULLAH ELHAM: Honestly, I really thought I will get the visa, because I knew that, specifically like regarding the financial issues, the United Nations, I think, was not paying, like, for the — for flight issues, because I was not one of the green ticket winners, because I was under 18. But the school was having the financial assurance of the embassy, saying that all the travel-associated costs will be paid by — as much as I needed, by the school, and also the United Nations was providing accommodation there. I did not have any financial issues at all. I have all the supporting documents that totally and completely supported all the financials I should —

AMY GOODMAN: So, I want to give you a chance to talk to some of the students, though you can’t do it here. Katie Eder is with us in New York, one of the lead organizers of this mass climate protest today. Katie, if you’d like to directly address Nasratullah?

KATIE EDER: Yeah. It’s so good to meet you. I think it’s so amazing that we’re part of the same movement and part of the same fight, even though we’re on totally separate sides of the world. So, I’m so sorry that we won’t be able to meet in person, but glad we’re able to connect this way. And I’m really curious to know — you know, one of the things that we really talk about in the U.S. is that so much of the narrative around climate change is what we’re fighting against and often not what we’re fighting for. And so, I’m curious: What are you fighting for? And what’s your vision for the future?

NASRATULLAH ELHAM: Well, definitely, climate change is mostly a future problem, but I don’t really see it as a more future problem than a current problem. I see it kind of the problem that currently some parts of the world are more hit by the impacts — as an example of my country.

And, well, for the future, I’m not really optimistic that the situation is going to get better, 'cause if you look at the previous protocols, like Kyoto or other, that the idea of the carbon cap and trade was proposed, the carbon credit and tax was proposed, was not really fully implemented. And multinational corporations, they just kept doing what they were doing. And I think if the situations go like that, I don't really feel optimistic. And it’s going to — the impacts are going to get wider.

AMY GOODMAN: We’re going to end with Greta Thunberg. She just tweeted, “The #ClimateStrike demo passing the House of Nobility, Stockholm earlier today.” I want to turn to her clip from being on Democracy Now!, the hour we spent with her. I asked her message to young people.

GRETA THUNBERG: My message to the young people of the world is that right now we are facing an existential crisis, I mean, the climate and ecological crisis, and it will have a massive impact on our lives in the future, but also now, especially in vulnerable communities. And I think that we should wake up, and we should also try to wake the adults up, because they are the ones who — their generation is the ones who are mostly responsible for this crisis, and we need to hold them accountable. We need to hold the people in power accountable for what they have been doing to us and future generations and other living species on Earth. And we need to get angry and understand what is at stake. And then we need to transform that anger into action and to stand together united and just never give up.

AMY GOODMAN: So, that’s 16-year-old Greta Thunberg, who will be here in New York as one of the leaders of the climate strike here, as we also talk to leaders all over the country. That does it for our roundtable, but certainly not our coverage.

Xiye Bastida, thank you for joining us here in New York, and Katie Eder; Jerome Foster II, as well, in Washington, who, together with Isra Hirsi, all of you will be at the U.N. Youth Climate Summit on Saturday. I want to thank Kelsey Juliana and Juwaria Jama and Nasratullah Elham. Yes, you couldn’t be here in person, but we broke the sound barrier with your voice from Phuket, Thailand, denied a visa to come to that Youth Climate Summit. But the activism is happening everywhere.

Follow our Twitter feed at Democracy Now! We’ll be bringing you a special on the actions over the weekend on Democracy Now!, democracynow.org. I’m Amy Goodman. Thanks so much for joining us.

To see our full discussion with Greta Thunberg, go to democracynow.org. 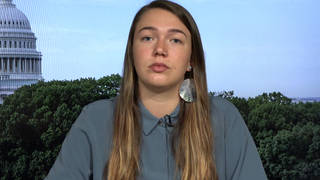