In India, the death toll amid the government’s crackdown on widespread protests has risen to at least 27 people, and over 1,000 more have been arrested. The protests are against a controversial new citizenship law, which provides a path to Indian citizenship for undocumented immigrants from Afghanistan, Bangladesh and Pakistan — unless they are Muslim. Opponents of the law say it’s a step toward the official marginalization of India’s 200 million Muslims. Paramilitary and police forces were deployed in response to the demonstrations in Muslim-majority districts in Uttar Pradesh and New Delhi, and the internet was shut down. We go to Mumbai for an update from Rana Ayyub, global opinions writer for The Washington Post, where her latest piece is headlined “India’s protests could be a tipping point against authoritarianism.”

StoryDec 17, 2019“Police Brutality All Over”: India Cracks Down on Protests Against Anti-Muslim Citizenship Law

AMY GOODMAN: Music by Madara, released at the height of the protests in India. The video has gone viral. This is Democracy Now! I’m Amy Goodman, with Nermeen Shaikh.

NERMEEN SHAIKH: We end today’s show in India, where the death toll amid the government’s crackdown on widespread protests has risen to at least 27 people, with over a thousand more arrested. The protests are against the controversial new citizenship law, which provides a path to Indian citizenship for undocumented immigrants from Afghanistan, Bangladesh and Pakistan — unless they are Muslim. Opponents of the law say it’s a step toward the official marginalization of India’s 200 million Muslims. Paramilitary and police forces were deployed in response to the protests in Muslim-majority districts in Uttar Pradesh and New Delhi, and the internet was shut down.

AMY GOODMAN: For more, we go to Mumbai, where we’re joined via Democracy Now! video stream by Rana Ayyub, Indian journalist who’s a global opinions writer for The Washington Post. Her most recent piece is headlined “India’s protests could be a tipping point against authoritarianism.”

RANA AYYUB: Thank you, Amy. Well, for the longest time, I mean, this government’s attack on the Muslim minorities, which constitute about 250 million Muslims in the country — in the first five years of Mr. Modi’s regime, there were lynchings of Muslims on the accusation of, you know, consuming beef or various other allegations that Muslim men are marrying non-Muslim women, so they would be lynched in the streets. There was a great deal of dog whistle from the prime minister of the country, from the home minister of the country. Laws were being introduced. So, the first five years of Mr. Modi’s regime was a dog whistle.

The second term, which Mr. Modi has just begun, is about a brazen consolidation of the Hindu vote. And so far, those who oppose Mr. Modi’s majoritarian views are very passive, especially Muslims in the country. They have been — they have been very silent. They have not been a part of any protest, despite the fact of the government bringing one majoritarian act after the other. In August this year, there was a clampdown in Kashmir, where the kind of special status of Kashmir was revoked, followed by the Supreme Court judgment in the Babri Masjid ruling, where now a massive temple will be built — and that’s on the BJP’s agenda — to the citizenship amendment bill, in conjunction with the National Register of Citizens, wherein every persecuted minority from the neighboring area, neighboring countries, will be given citizenship, except Muslims.

Now, everything, if you see it in totality, is an attempt to create a Hindu nation, a country which will no longer remain a secular democracy. But for the first time, there seems to be an attempt by the citizens of the country, especially Muslims, who are out in the streets with symbols of religion — they’re wearing their skullcaps, women in hijab — they are stepping out. I mean, the protest in Mumbai, which is largely — which is largely a really indifferent city to protest or to civil rebellion, that protest in Mumbai saw close to 200,000 people participating, reading the Constitution of this country, protesting against the prime minister and the home minister of the country.

So it’s a good sign. It is a tipping point against authoritarianism, because Mr. Modi has driven Muslims of this country to the wall. They have been silent for the last six years, but I think they have chosen now to break the silence, because Mr. Modi is seeking to delegitimize their existence or actually make them second-class citizens in their own country, where they and their forefathers have lived. These are the same Muslims who chose India over Pakistan in 1947 during the partition. So, there is this everyday humiliation which Muslims in this country are witnessing. And it’s heartening to see that in the protests that are happening all over the country, it’s not just Muslims, but also non-Muslims who are standing in solidarity with them to protect the very idea of India, which we have been celebrating for decades, Gandhi’s India, which has been nonviolent, which helped raise the secular traditions of this country, the syncretic culture of this country, which now is under threat by Mr. Narendra Modi’s government.

NERMEEN SHAIKH: Rana Ayyub, can you explain, though? I mean, as you were saying, these massive protests all over India that have been taking place, is there any indication, though, that the Modi government is likely to withdraw or modify the Citizenship Amendment Act or the NRC or, indeed, not to push through subsequent proposals, like the uniform civil code? Has Amit Shah, the interior minister, or anyone else in the Modi government responded to the protests by suggesting that they’ll compromise?

RANA AYYUB: Not yet. In fact, the government has turned a blind eye to the 27 lives that have been lost in the last three weeks itself, out of which 20 lives — you know, 20 were murdered in the province of Uttar Pradesh, which is ruled by a BJP chief minister. It’s become like a prestige issue. And Mr. Modi and Mr. Amit Shah, the prime minister and the home minister, did not anticipate this backlash, because they were seeing a very passive Indian citizenry which was not objecting to one majoritarian bill after the other being introduced in the country in the Indian Parliament, so they thought they could push one more bill. But they did not anticipate this backlash.

Having said that, I think the government has decided to brazen this out. They are — their target audience is the majority-Hindu population, to whom it is trying to communicate that “We are fighting, and people are protesting against our decision to give you the right of Hindu supremacy.” So, it doesn’t look like the government is going to roll back this act yet. There is immense pressure on the Indian government. The protests have sustained itself, and that’s a great sign. But I don’t see them revoking this, because the government has decided to brazen this out.

They’re also planning to introduce two more bills: the population control bill and the uniform civil code, which again is an attack on the Indian minorities, because there’s this misconception, and there’s this — you know, as we call it, the WhatsApp fake information, which is being spread by the BJP and its affiliates, that Muslims in this country are producing more children than the Hindus, and they will take over India by 2050. And, you know, this kind of fake news has been a part of the BJP machinery. You know, their leaders keep spreading — they keep talking about this in their tweets and social media. So, they have decided to brazen this out by introducing two more bills.

Now, it will — one has to wait and see how do the protests then impact the government’s decision, because they have already taken a violent form in Uttar Pradesh, where the chief minister of Uttar Pradesh said that “I will take revenge on the protesters,” and two days later, 20 Muslims were slaughtered in a span of two nights. A police officer is heard telling the protesters that “If you want to protest, go to Pakistan,” which is basically, you know, you’re implying that Muslims only belong in Pakistan if they have to protest. A student hostel, which was home to orphans, close to a hundred orphans, was attacked by the police forces. Now, the teacher, who is a Muslim cleric, was stripped naked.

AMY GOODMAN: Well, we will link to your piece in The Washington Post, “India’s protests could be a tipping point against authoritarianism.” Rana Ayyub, Indian journalist, global opinions writer for The Washington Post. We thank you so much for being with us.

I’ll be speaking Friday night at the Quad Cinema in New York after the showing of Advocate, which has just been shortlisted for an Oscar, interviewing the filmmakers. I’m Amy Goodman, with Nermeen Shaikh. Happy News Year! 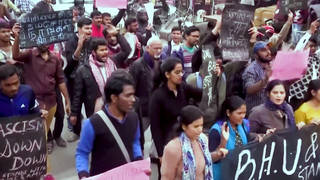