Isabel Cabanillas, a 26-year-old beloved feminist activist and artist, was recently assassinated in Ciudad Juárez, resurfacing the border city’s painful legacy of femicides and violence against women. Cabanillas was reported missing on social media by her friends on Saturday, January 18, after she never returned home. On that same day, she was found shot to death on a sidewalk next to her bicycle in downtown Juárez. We speak with Nana Rebell, a feminist activist in Ciudad Juárez and a member of the Juárez feminist collective Hijas de su Maquilera Madre, about Cabanillas’s life and the endemic issue of femicide in the region.

AMY GOODMAN: This is Democracy Now!, democracynow.org, The War and Peace Report. I’m Amy Goodman, as we now turn to the city of Juárez, Chihuahua, Mexico, where the assassination of the beloved feminist artist Isabel Cabanillas de la Torre has refocused the spotlight on the border city’s painful legacy of femicide and violence against women. Less than two weeks ago, Isabel was reported missing on social media by her friends after she never returned home. She was riding her bicycle in the early hours of Saturday, January 18th. The 26-year-old was found shot to death on a sidewalk next to her bike in downtown Juárez. Cabanillas reportedly was biking home after leaving a friends’ gathering, when she was shot in the back of the head. She’s survived by her 4-year-old son. Isabel Cabanillas was a member of the feminist collective Hijas de su Maquilera Madre, Daughters of the Mother Maquilera. She was a local painter and a clothing designer. Cabanillas was also involved with The Observatory, a project that tracks crimes against women in Juárez. This is Isabel speaking to a Juárez media outlet in April of 2019.

ISABEL CABANILLAS: [translated] One of the reasons why I paint — well, aside from the fact that it has helped me overcome a lot of hard times — one night, I woke up, and I started thinking that I needed to do something for myself and for my child. In fact, this is for him. I sincerely want to be a good role model for him, let him know that if he is passionate about something, that he can pursue it. He just has to work really hard for it.

AMY GOODMAN: That was Isabel Cabanillas. In the last three years, more than 300 women have been murdered in Juárez. Since the beginning of 2020, activists say, at least seven women have already been killed. On Sunday, women and allies, dressed in black with pink masks, gathered at the Paso del Norte International Bridge between the sister cities of Juárez and El Paso, Texas, to protest Isabel’s murder. They blocked off the bridge for at least three hours.

For more, we’re going to Juárez. We’re joined by Skype by a friend of Isabel, Nana Rebell. She’s a feminist activist in Juárez, a member of the same group. But because she’s afraid of retaliation, she’s using a pseudonym and covering her face.

Nana Rebell, thank you so much for joining us. Tell us about Isabel, who she was and what you understand about how she died, and the conditions for women in Juárez today.

NANA REBELL: Hi. Well, Isabel was — well, she always presented herself as a painter and as a mother of her only 4-year son. And she was a really sensitive and loving woman. And Isabel didn’t label herself as a feminist, because she thought she hadn’t read enough women authors to label herself like that. But in the end of the day, in her day-to-day life, she was a feminist. She always — OK, so I don’t hold the microphone?

NANA REBELL: OK. On a day-to-day basis, she was a feminist, because she always loved first women. She always was there on the protests for women’s rights. She always had the fine sense and instinct for justice for women who have suffered misogyny, violence in their lives. And Isabel, part of what she did for a living in her artistic job was painting on clothing, on jackets and on T-shirts. And a lot of the labor she did on the community was giving, in the winter of 2019, a collection of food and blankets and clothings for immigrants. She was really public with her activism. She was really in the spotlight. She was also — in mural painting along the border, she painted a boy and a girl playing on the border. And she was always active. She was always there. And she also fight — she was also a part of the ecofeminist movement at Ciudad Juárez, because she was fighting against a Canadian mine that wants to be put in the Samalayuca Desert. And —

AMY GOODMAN: Nana, we don’t have much time, and I was wondering if you can talk about the issue of femicide and the issue of police and how they deal with these murders, a major protest now demanding information about what happened to Isabel, and what you’re demanding now.

NANA REBELL: OK. Well, femicide in Ciudad Juárez is something, sadly, very common. And police and the state don’t do anything to solve these crimes. Most of these crimes will stay unpunished forever. Like, even though men go into court and they declare they kill their wife or their daughter or maybe their neighbor, they will be unpunished. And it’s something really unbelievable, because in what we have of the year, we have reported eight women murdered in Ciudad Juárez, and we only have 27 days on January. So, it’s a really red flag for women here in Ciudad Juárez.

AMY GOODMAN: Well, Nana Rebell, I want to thank you so much for being with us. We’re going to continue to follow the story about the murder of Isabel and continue to talk about the protests that are taking place, as you speak to us from Ciudad Juárez with your name changed to protect you from retaliation, with the level of femicide what it is in Juárez, Mexico.

This is Democracy Now! When we come back, the renowned Chinese artist and activist Ai Weiwei. We’ll talk about Mexico, as well. 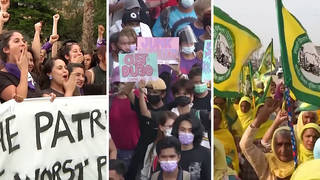