“This Country Is a Tinderbox”: Australia Braces for More Devastation as Gov’t Denies Climate Crisis

Australia is bracing for what is expected to be the worst weekend yet in an already devastating climate-fueled wildfire season that has ravaged the southeastern part of the country, killed at least 18 people and nearly half a billion animals, and destroyed 14.5 million acres of land. As thousands of evacuees fled to the beaches, conservative Prime Minister Scott Morrison is facing growing outrage for his inaction on climate and close ties with the coal industry. As fires blazed in December, the prime minister went on a holiday to Hawaii. He told reporters this week that fighting the fires — not climate change — was his top priority. On Thursday, Morrison was shouted out of the town of Carbago after being confronted by angry fire victims. We go to Melbourne, Australia, to speak with Tim Flannery, chief councilor at the Australian-based Climate Council.

AMY GOODMAN: This is Democracy Now! I’m Amy Goodman. Australia is bracing for what’s expected to be the worst weekend yet in an already devastating climate-fueled wildfire season that’s ravaged the southeastern part of the country, killing at least 18 people, nearly half a billion animals, as well, destroyed 14-and-a-half million acres. The state of New South Wales, which includes the capital Sydney, declared a state of emergency Thursday, and the state of Victoria declared a state of disaster.

As thousands of evacuees fled to the beaches, conservative Prime Minister Scott Morrison told reporters this week that fighting the fires — not climate change — is his top priority. Morrison faces growing outrage for his inaction on climate and close ties with the coal industry. As fires blazed in December, the prime minister went on holiday to Hawaii. On Thursday, Morrison was shouted out of a small town after being confronted by angry fire victims, this coming as Australia’s Bureau of Meteorology confirmed 2019 was the continent’s highest year on record.

In these last few minutes, we go to Melbourne, Australia, where we’re joined by Tim Flannery, climate activist, part of the government’s Climate Commission before it was disbanded. Now he’s chief counsel for the Australian-based Climate Council.

We’re going to go to a clip of the prime minister, Scott Morrison.

PRIME MINISTER SCOTT MORRISON: I’ve always acknowledged the link, as has the minister, between the broader issues of global climate change and what that means for the world’s weather and the dryness of conditions in many places. But I’m sure you would also agree that no response by any one government anywhere in the world can be linked to any one fire event — and I don’t think you’re suggesting that here — in New South Wales, Victoria or anywhere else. The government’s plans on climate change are very clear, and the achievements we’re making, and we’ve set out well. … What we will do is ensure that our policies remain sensible, that they don’t move towards either extreme, and stay focused on what Australians need for a vibrant and viable economy, as well as a vibrant and sustainable environment.

AMY GOODMAN: The prime minister, Scott Morrison, is known for his support of the dirtiest fossil fuels. In 2017, Morrison, who was the treasurer of Australia, brought a lump of coal to the floor of the Australian Parliament in order to mock opposition lawmakers. No one in Australia is laughing now. Let’s see if we can get Tim Flannery on for this last minute to describe the situation. Tim, are you there?

AMY GOODMAN: Go ahead. In this last minute — sorry we just lost you. Continue to hold forth on what is happening in your country.

TIM FLANNERY: Sure. Well, look, this is a national catastrophe. It’s the largest evacuation, we think, in the nation’s history, unprecedented fire season that’s run from September through to today and promises to run for some months yet. It’s clear that whatever the government policies are, they are inadequate. We have seen enormous damage in this country to infrastructure, loss of human life and to biodiversity.

And this is being driven by climate change. We know that because the chances of this occurring naturally, they’re about one in 350 to have a year as hot as this. If you add in the human pollution, the human CO2 pollution, it drops to one in eight. So we will start seeing more of these extreme years, I fear, as time goes on, unless we can do something quite dramatic in terms of reducing global emissions of greenhouse gases.

AMY GOODMAN: And the scene right now on the east coast, these fires have already killed — we don’t know how many. We believe 18. I mean, to say the least, thousands of animals. Do you see these contained at any point soon? What has to happen?

TIM FLANNERY: Look, the fire chiefs are telling us that these fires are simply not containable at the moment. We have had our driest year on record. And the year before was extraordinarily dry. It’s the hottest year on record. We have got very windy conditions. This country is a tinderbox. And what’s extraordinary, Amy, is that it’s not just the people in the fire zones that are being affected. The smoke palls are just devastating our major cities. We’ve got a health crisis with people turning up with breathing difficulties. And it’s just relentless. It’s gone on and on now for months.

AMY GOODMAN: Well, I want to thank you, Tim Flannery, for joining us. I hope to be back in contact with you next week. But this weekend promises to be terrifying in Australia, by all accounts. I want to thank you so much, chief counsel at the Australian-based Climate Council. 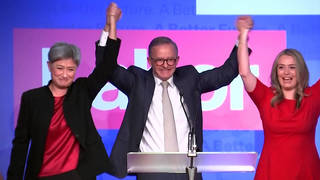