As the presidential race enters its final full week, we speak with filmmaker Nadine Natour about “Natours Grocery,” her new documentary short that tells the story of her Palestinian American family living in Trump’s America. Natour’s immigrant parents own a store in the highly conservative town of Appomattox, Virginia, which voted overwhelmingly for Donald Trump in 2016. The Natours say they don’t talk about politics or religion with their customers to avoid confrontation, but as they strive to build bridges with their neighbors, President Trump’s anti-immigrant, anti-Muslim rhetoric inspires a backlash in Appomattox. “In the election of Donald Trump we saw a lot of that bubbling racist sentiment toward immigrants, towards Muslims, become part of the mainstream discourse,” says Natour. “You really could see a shift in attitudes.” “Natours Grocery” premieres tonight as part of ”POV Shorts” on PBS.

As the presidential race enters its final full week, President Trump is continuing to run a campaign filled with attacks on immigrants and even immigrant members of Congress. During one recent rally in Michigan, Trump claimed Congresswoman Ilhan Omar of Minnesota, quote, “truly hates our country,” he said. Omar is the first Somali American elected to Congress and, along with Rashida Tlaib, a Palestinian American congressmember, one of just two Muslim women ever elected to Congress.

Well, today we take a look at what it’s like for one Palestinian American family living in Trump’s America. In a short documentary titled Natours Grocery, the filmmaker Nadine Natour shares the story of her immigrant parents, who own a store in the highly conservative town of Appomattox, Virginia, which voted for President Trump in 2016.

GEHAD NATOUR: We know everybody in town.

SABAH NATOUR: Politics, especially when we came, like, really long time ago, it wasn’t that big of a deal. It’s different now maybe.

PRESIDENT DONALD TRUMP: I think Islam hates us. … There’s a level of hatred within a certain community — in this case, the Muslim community. … We have to look at the Muslims, and we have to do something. We cannot stand by and be the stupid people while our country is destroyed.

GEHAD NATOUR:I have a motto, that: “Do not talk about politics or religion with your customer.” If you do, you lose them.

APPOMATTOX RESIDENT 2: Everybody knows everybody.

APPOMATTOX RESIDENT 3: In between Lynchburg and Richmond.

APPOMATTOX RESIDENT 4: There ain’t much to do around here.

APPOMATTOX RESIDENT 6: Appomattox is mainly known for the end of the Civil War, where Robert E. Lee surrendered to Ulysses S. Grant, the “War of Northern Aggression.” I won’t say that.

NADINE NATOUR: No, actually, you did.

APPOMATTOX RESIDENT 6: You got me!

AMY GOODMAN: For the Natours, their roots are thousands of miles away, in Palestine.

GEHAD NATOUR: I was born and raised in Qalansawe, in Palestine. In 1948, Palestine was occupied by Israel. The only jobs for us was laborers at Jewish settlements, and I couldn’t do that. So I decided to become a farmer. I got enough money to buy a ticket to the United States.

AMY GOODMAN: While the Natours say they don’t talk about politics or religion with their customers, Sabah Natour does share some of her cultural heritage.

SABAH NATOUR: Hey, would you like to try my dessert I made? It’s like a Mediterranean dessert. This is baklava. It’s made with layer pastries and nuts and spices.

SABAH NATOUR: And this is made out of cream wheat.

SABAH NATOUR: So, I started to bring in desserts.

CUSTOMER 2: This is good, right there.

SABAH NATOUR: It was kind of like building bridges between us and the customers.

AMY GOODMAN: While the Natours build bridges with their neighbors, President Trump’s anti-immigrant, anti-Muslim rhetoric has inspired a backlash in Appomattox.

PRESIDENT DONALD TRUMP: If you’re not happy in the U.S., if you’re complaining all the time, very simply, you can leave. You can leave right now.

REPORTER: A Virginia church is echoing that sentiment with this billboard that says “America: Love it or leave it.” Pastor E.W. Lucas put up the sign at Friendship Baptist Church in Appomattox. Some members of his church led the congregation out of the service in a stance against him.

CUSTOMER 3: When I saw it on the news last week, I told my wife; I said, “I’m going to church Sunday.”

SABAH NATOUR: To do what?

SABAH NATOUR: To do what?

CUSTOMER 3: Just to support that preacher.

SABAH NATOUR: To support the preachers?

SABAH NATOUR: Why? Why isn’t — the church is supposed to have everybody?

PASTOR E.W. LUCAS: The Bible inspired the Declaration of Independence. We got our system of government from the Bible. Don’t talk to me about that flag out yonder or that sign out yonder. This is our country! And it was our country long before they ever came across the waters and got over here! [singing] My country, ’tis of thee.

AMY GOODMAN: Excerpts from the short documentary Natours Grocery. It premieres tonight as part of the POV Shorts on PBS. We’re joined by the film’s director, Nadine Natour. She was an associate producer on the Oscar-nominated film RBG. Nadine here is telling her own family’s story. Those are her parents who run the grocery store. She’s the oldest of four daughters.

Nadine, thanks so much for joining us on Democracy Now! We don’t have much time, and I want you to get to the heart of this story, your growing up in one of the most conservative areas of the United States, and how, from you to your youngest sister, you feel the area has changed.

NADINE NATOUR: Thanks so much for having me, Amy.

Yes. So, while I was growing up, I really didn’t pay that much attention to being Muslim, to being Arab. My parents came from Palestine, and it was just sort of part of growing up. We didn’t — we’re a secular family, didn’t pay too much attention to that. But as the years progressed and we saw different administrations come and go, and the climate for American Muslims became a bit more worrisome.

So, in the election of Donald Trump, we saw a lot of that bubbling racist sentiment towards immigrants, towards Muslim, become part of the mainstream discourse. And whereas I really never thought about it, when it comes to my youngest sister, who you see in the film, she fended off ignorant comments or attacks on her heritage as she was going through school. So, you really could see a shift in the attitude towards Muslims, towards immigrants, and especially with the election of Donald Trump, the underlying discourse sort of was brought out into the open.

AMY GOODMAN: Your father is known as “G” by the community, as he runs Natours Grocery. His name actually is Gehad, is that right?

AMY GOODMAN: Did he shorten it because he felt it might not go over well in this part of the country?

NADINE NATOUR: You know, at the time, I don’t think that association was being made yet. And he probably just wanted people to have the ease of saying a name quickly, just as many immigrants are looking for ways to sort of adapt and blend in with the community that becomes their new home. But, yes, his name is Gehad.

NADINE NATOUR: You know, after 9/11, there wasn’t necessarily a huge shift in my experience. But for someone — my sister was born the day after. So, for someone like her, it really made a difference in the way that she experienced, you know, feeling like a part of the town. But this was what I really wanted to explore in the film, was that we really felt a tremendous amount of love from the people in our town, and it was interesting to me to talk to our customers and people in Appomattox about why they voted for someone who was saying anti-immigrant, anti-Muslim sentiments as part of their campaign and as part of their platform. And I think it’s important that no matter who gets into office in the next election, that we sort of make sure we can protect the Muslim America as part of — as part of the country.

AMY GOODMAN: And I wanted to bring in Julie Cohen, finally, the producer of this film, who also produced and directed the Oscar-nominated film RBG. Julie, why you got involved with Nadine’s film?

JULIE COHEN: First of all, because my belief in Nadine as a filmmaker, but also just the story of her family is so incredible. I mean, you hear those soundbites at the beginning and that you were mentioning of Donald Trump saying Muslims hate this country. I mean, when you see this film, Nadine’s family represents, in every way, so beautifully, the American dream. And to think that there’s this huge misunderstanding, at best, and, you know, just really, really ugly hatred, at worst, it just feels like it’s a misunderstanding that really needs some clearing up. And Nadine has done a gorgeous job of doing that.

AMY GOODMAN: And, Julie, as you did RBG, your thoughts today on what is the probable confirmation vote for Supreme Court nominee Amy Coney Barrett? We have 15 seconds.

JULIE COHEN: Well, you know, it looks like it’s happening. If there were ever a time that we needed a voice of dissent, what Justice Ginsburg so beautifully provided, it’s now. I think, you know, with the threat of rights being peeled back, I think many of us are concerned that Amy Coney Barrett [inaudible] —

AMY GOODMAN: We have to leave it there. Thank you so much, Julie Cohen and Nadine Natour. 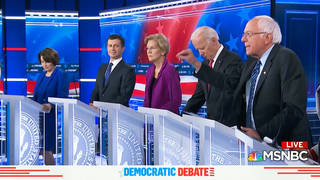