Civil rights attorney Bryan Stevenson, who founded the Equal Justice Initiative, was one of four human rights defenders to win this year’s Right Livelihood Award on Thursday. The “Alternative Nobel Prize” was also awarded to Indigenous rights and environmental activist Lottie Cunningham Wren of Nicaragua, Belarusian pro-democracy activist Ales Bialiatski and Iranian human rights lawyer Nasrin Sotoudeh, who was returned to prison one day before the ceremony after being temporarily released last month due to her worsening health.

AMY GOODMAN: The ceremony for the Right Livelihood Award, also known as the “Alternative Nobel Prize,” was held Thursday. Four winners shared the honor this year: Indigenous rights and environmental activist Lottie Cunningham Wren of Nicaragua, Belarusian pro-democracy activist Ales Bialiatski, U.S. civil rights lawyer Bryan Stevenson, and Iranian human rights lawyer Nasrin Sotoudeh, who was returned to prison one day before the ceremony after being temporarily released last month due to her worsening health and because of COVID conditions in Iran.

Bryan Stevenson was presented his award by Anthony Ray Hinton, who spent 30 years on death row for a crime he did not commit and now works alongside Stevenson at the Equal Justice Initiative in Alabama. This is Stevenson speaking at the ceremony.

BRYAN STEVENSON: I work in a country that has the highest rate of incarceration in the world. I work against a system that treats you better if you’re rich and guilty than if you’re poor and innocent. We work to overturn this horrific era of mass incarceration in America that has been brought about by the politics of fear and anger. And in too many places across the world, we’re being governed by people who preach fear and anger. And fear and anger are the essential ingredients of oppression and abuse.

And we need a community of people to stand up against this. That’s what human rights work is about for me. It’s about challenging these conditions that have been so brutal, so toxic, so critically unfair. There are thousands of innocent people in our jails and prisons, and we’re going to continue fighting for them.

I am the descendant of one of the 12 million Africans who were abducted, kidnapped, trafficked to this continent 400 years ago. My great-grandparents were enslaved. They had to deal with the bondage and horrors of slavery in this nation. And yet they persevered. They had a hope. They had a belief. They had a commitment to freedom and equality.

I’m standing in front of jars. And behind me, these jars represent the thousands of Black people who were lynched in America. These were collected at sites across America for a century. African Americans were brutalized, pulled out of their homes, beaten, bloodied, drowned, torched, lynched, in a nation where lawlessness reigned.

I am the child of people born into Jim Crow. My parents were humiliated and denigrated by those signs that said “white” and “colored.” And they weren’t directions; they were assaults. They created injuries. And our nation has not confronted those injuries. I began my education in a colored school. But I wouldn’t be here today if lawyers hadn’t come into our community and made it possible for me to go to high school and college and law school.

I am in Montgomery, Alabama. It’s a community where, a generation ago, people put on their Sunday best to protest, to fight for equality and justice. They knew they would get bloodied and battered and beaten, but they went anyway. I stand on the shoulders of people who did so much more with so much less. And because of them, I am determined that we must keep fighting. Because of them, I believe that we must stand up even when people say, “Sit down.” We must speak even when people say, “Be quiet.”

Wherever human rights are being violated, wherever injustice can be found, wherever inequality can be seen, there have to be a community of people who fight. And I am honored to be among that community and to receive this recognition today for that fight.

Thank you so very much for doing what you’ve done for me. But more than that, for all of the people around the world suffering from inequality and injustice, thank you for recognizing the importance of our struggle.

AMY GOODMAN: Bryan Stevenson was speaking from a civil rights exhibition put on by the Equal Justice Initiative in Montgomery, Alabama. The exhibition features hundreds of jars of soil collected from various lynching sites around the United States.

You can see our interviews with Bryan Stevenson, Anthony Ray Hinton, as well as watch the entire Right Livelihood Award ceremony, at democracynow.org. 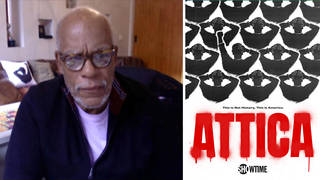