As hundreds of thousands took to the streets nationwide and around the world to call for police accountability and demand Black lives matter in the wake of the police killings of George Floyd, Breonna Taylor and Ahmaud Arbery, Democracy Now! spoke to some of the people who joined the historic protests Saturday in New York City.

AMY GOODMAN: We end this broadcast in the streets of New York, where hundreds of thousands of people have been letting their voices be heard. These are just some of them.

CYN FABRE: My name is Cyn Fabre [phon.]. And my wife is over there. I have four kids, two of them boys, and one presents as white, one presents as Black. I’m here so my son never has to do this march. And when we’re home, we have two different conversations: one for my son to save his life and be safe, the other conversation with my white son, to protect his brother when he gets older and do better for all the Black children in this world. So I’m here today for my son, so he never has to march ever again.

CYN FABRE: Sometimes what happens is we lose sight on what we’re all fighting for. We can get distracted. And I want people to remember Breonna Taylor. She is not forgotten. She is why I’m here. We are fighting for her. I can’t tell you what this march means to me today. This is history being made right now. And I’m glad to be a part of it.

DAKIA McLEAN: Well, my name is Dakia McLean [phon.]. I’m out here because, one, I’m a woman. I’m of color. I’m a mother of two boys, two girls. And it’s important. We had enough. This is the time. The time is now. So that’s why I’m out here.

DAKIA McLEAN: Again, a woman of color who was unjustly gunned down in her home. And of course we know it’s because of the color of her skin. You know, with these cops, it’s always shoot, ask questions last. But if you’re white, they ask questions before they do anything else.

LUCINDA CROSS: My name is Lucinda Cross. Our organization is Activate Your Life. We stand for women reentry to have the same rights. So I’m marching today to make sure that Black people are seen justly, just as white people are. I’m a mother of Black boys. So it’s important to not only just walk for my boys, but to also walk for the women that I believe in. This one, I think this is a world changer. I can say honestly, even my own son was accused of something he didn’t do. And so, this, right here, what is being done, is an extreme global world changer. And I’m honored to be a part of it. It’s about time. It’s about time we made global change. No justice, no peace! No racist police!

JASON GILLILAND: I’m Jason Gilliland [phon.]. I’m from Mississippi, but I went to school here. I’m here because, I mean, I’m affected. Despite my education, despite all I’ve done, I’m just as afraid when the police are behind me or I pass by them and everything else. And I don’t have a family yet, but I hope to. So I’m out here hoping to get more justice for my kids and my friends’ kids and everybody after me.

JASON GILLILAND: What else can we say? I mean, every opportunity he’s had to say something positive or help, he’s done the exact opposite. He’s done all he’s can to say that he’s not racist, but he makes sure to say that when racist things happens, there’s good people on both sides. I mean, we compare the riots anywhere else in the last few weeks, that he said about “thugs” and “when the looting starts, the shooting starts,” but when Charlottesville happened not that long ago, there were good people on both sides, when people were brutally beaten and run over by cars. And every opportunity to do the right thing, he does the wrong thing on purpose. So at some point you’ve got to believe him for who he is. And that’s why he got the response that you do.

This is Meagan Hockaday. She’s from Oxnard, California. On March 28, 2015, police was called because of a domestic dispute. Twenty seconds after arriving, police opened fire and killed her. She was only 28 years old. And the same police officer was just involved in a shooting one year prior. That person didn’t die, but people knew that there was a problem. Just like many other stories, nothing came of it. Very little justice was had at all. And many people don’t even know her name. So, along with Breonna Taylor and George Floyd and Eric Garner and Tamir Rice and everybody else, Meagan Hockaday deserves her attention, and she deserves her justice, too.

Linda Sarsour. I’m a Brooklyn activist. I’m a co-founder of Until Freedom. And I’m here organizing, like we’ve been doing for the last many decades, as you know, here in New York City for police reform. We’re literally watching history unfold before our very eyes. As an organizer, it’s different. I feel different. This is a moment where people have said, “Enough is enough!” And they mean at this time.

AMY GOODMAN: Voices of protest in New York. Special thanks to John Hamilton and Iara Fraga, and to Sadie Luetmer in Minneapolis.

That does it for our show. Democracy Now! is working with as few people as possible on site. The majority of our amazing team is working from home. If you want to sign up for our Daily Digest, go to democracynow.org. 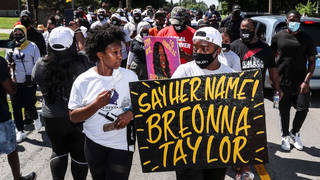