As this year marks 100 years since the ratification of 19th Amendment to the Constitution guaranteeing women’s right to vote, we look at the connection between the movement for women’s suffrage and the movement to abolish slavery. Many states created laws to continue to deny women the vote, and African American women were subjected to the same Jim Crow laws already used to deny the vote to African American men. “To look for African American women and their history of the vote in 1920 is to miss the important chapter that begins in 1920 and doesn’t culminate until the Voting Rights Act is adopted in 1965,” says author and Johns Hopkins University history professor Martha Jones, whose forthcoming book is “Vanguard: How Black Women Broke Barriers, Won the Vote, and Insisted on Equality for All.”

AMY GOODMAN: This is Democracy Now! I’m Amy Goodman, with Juan González. We are breaking with convention.

One hundred years ago today, the 19th Amendment to the Constitution was ratified. It guaranteed women’s right to vote, stating, “The right of citizens of the United States to vote shall not be denied or abridged by the United States or by any State on account of sex.”

But the 19th Amendment was not implemented equally. Many states created laws to continue to deny women the vote, and African American women were subjected to the same Jim Crow laws that had already been used to deny the vote to African American men.

For more on this and how the movement for women’s suffrage was connected to the movement to abolish slavery, we’re joined by historian Martha Jones, author of the forthcoming book, Vanguard: How Black Women Broke Barriers, Won the Vote, and Insisted on Equality for All. She recently wrote an op-ed in The New York Times headlined “Tackling a Century-Old Mystery: Did My Grandmother Vote?” She is the Society of Black Alumni presidential professor and professor of history at Johns Hopkins University.

Professor, welcome back to Democracy Now! Did your grandmother vote?

AMY GOODMAN: Tell us her story and how that fits in to this day, the day of the 100th anniversary of the ratification.

MARTHA JONES: I was finishing Vanguard, and I realized I didn’t know my grandmother’s story, and this sent me on a whole new quest. I looked for her in St. Louis, Missouri, where she lived in 1920, and Black women were coming to the polls in important numbers to combat the rise of residential segregation in that city. But I couldn’t find her there. I followed her to Greensboro, North Carolina, where she and my grandfather began a college, Bennett College, for African American women in 1926. I couldn’t find her there. The records of women’s early votes in North Carolina haven’t survived, and I couldn’t tell that story.

But I followed her until the 1950s and '60s, where I see her alongside the young women at Bennett College, now part of the modern civil rights era, organizing and knocking on doors and getting Black Americans registered to vote as part of that civil rights revolution. As she put it in an interview in those years, it was “thrilling.” And it was thrilling for me to find her there, but it was a reminder that to look for African American women and their history of the vote in 1920 is to miss the important chapter that begins in 1920 and doesn't culminate until the Voting Rights Act is adopted in 1965.

JUAN GONZÁLEZ: And, Professor Jones, you write in the book that Black women voting rights activists actually predated the famous white suffragettes. Could you — why did you title your book Vanguard?

MARTHA JONES: I titled my book Vanguard because as early as the first decades of the 19th century, Black women are developing a political philosophy, a critique of the United States. It is a view that says no racism, no sexism in American politics. For a very long time, African American women are quite alone in carrying those principles forward, holding the bar high for this nation. I call them the vanguard because, indeed, they lead us to a 21st century in which, I think it’s fair to say, that view, while it may not be held by all Americans, certainly has a place, an important place, in our political agenda. Black women lead us there. It is a lonely, lonely trek for much of our history. But here in the 21st century, when we say no racism and no sexism in politics, it sounds very presentist, but it turns out it’s a very old set of ideas.

AMY GOODMAN: And in the last minute and a half we have, Martha Jones, can you tell us some of the early Black suffragists, long before the Seneca Falls Convention of 1848, and how they ultimately led toward the 19th Amendment, who are often erased from that history that we learn?

MARTHA JONES: I want to introduce you to Maria Miller Stewart, who in the early 1830s is in Boston, once an indentured servant, now a free Black woman in that city, who takes first her pen to the pages of William Lloyd Garrison’s The Liberator and then to the podiums of Boston, where she makes the case for Black women’s place in politics. She decries the sexism and the racism that keep her and women like her from shaping the future of their communities and the future of the nation. Maria Stewart is the very first American woman to speak from a podium about politics. We don’t remember her. For too long she was eclipsed by the women of Seneca Falls. But I’m very pleased, in this anniversary year, to reintroduce her to American audiences.

AMY GOODMAN: And Septima Clark, in this last 30 seconds?

MARTHA JONES: Absolutely, right. The women of the — the courageous women, who put their bodies, their lives, their families and communities on the line in the modern civil rights era, we would not be in this moment today without that extraordinary vision, but also that extraordinary risk-taking. The violence was persistent, and the courage was phenomenal.

AMY GOODMAN: Martha Jones, we want to thank you so much for being with us. There is so much more to talk about. But August 26 is the actual congressional certification, the 100th anniversary of the Congress certifying the 19th Amendment, and we’ll continue the conversation then. Martha Jones, author of the forthcoming book, Vanguard: How Black Women Broke Barriers, Won the Vote, and Insisted on Equality for All. 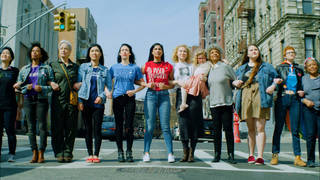