Iván Velásquez is a Colombian prosecutor who headed the International Commission Against Impunity in Guatemala from 2013 to 2019, a powerful U.N.-backed commission formed to investigate corruption in the country and supported by the Obama administration. But Velásquez and other investigators were expelled from the country after the Trump administration agreed to withdraw support for the commission in apparent exchange for Guatemala’s support of Trump’s immigration and Middle East policies. The details of that quid pro quo between President Trump and Guatemalan President Jimmy Morales are detailed in a new investigation by Reveal from The Center for Investigative Reporting. We speak with reporters Aaron Glantz and Anayansi Diaz-Cortes.

AMY GOODMAN: This is Democracy Now!, democracynow.org, The Quarantine Report. I’m Amy Goodman. “How Donald Trump took down the Robert Mueller of Latin America.” That’s the headline of a new investigation by Reveal at The Center for Investigative Reporting and in The Daily Beast that looks at how the Trump administration aided Guatemala’s right-wing government to kill a powerful anti-corruption commission.

The story centers on Iván Velásquez, a Colombian prosecutor who headed the International Commission Against Impunity in Guatemala, known as CICIG, from 2013 to ’19. A leading backer of the commission in the United States was former Vice President Joe Biden. After leaving office, Biden wrote, quote, “I made it clear that U.S. funding for Guatemala hinged on CICIG being allowed to continue its work.”

But the Trump administration took the opposite approach and agreed to withdraw support for the commission in apparent exchange for Guatemala’s support of Trump’s immigration and Middle East policies. In 2018, Guatemala moved its embassy in Israel to Jerusalem just after the United States did. A year later, Guatemala’s then-president, the former comedian Jimmy Morales, agreed to make Guatemala a “safe third country,” quote-unquote, for migrants seeking asylum in the U.S. The agreement requires asylum seekers who journey through Guatemala en route to the United States to apply for asylum in Guatemala instead of at the U.S.-Mexico border.

On August 31st, 2018, Guatemalan President Morales announced he was shutting down the anti-corruption commission, which had begun investigating Morales himself, his son and his family. Morales was flanked by 50 military officers. Soon tanks and jeeps with mounted artillery, provided by the United States, circled around the office of the commission.

Reporters Aaron Glantz and Anayansi Diaz-Cortes write, quote, “All of this shook Guatemalan society to the bone — a dark reminder of the civil war and military rule,” unquote. Before it was disbanded, CICIG have prosecuted over 100 cases, including one against former Guatemalan President Otto Pérez Molina, who was forced to resign in 2015 after months of massive protests and remains in jail.

Well, Aaron Glantz and Anayansi Diaz-Cortes both join us to talk about their reporting for Reveal and the report in The Daily Beast.

Aaron, why don’t you talk about the significance of releasing this now? I mean, this is a story that involves President Trump, that involves Vice President Pence, that involves Sheldon Adelson, the big Republican donor, in connections to Israel, that involves Colombia itself. Iván Velásquez is a crusading human rights prosecutor, who was attempting to do this work in Guatemala.

AARON GLANTZ: Iván Velásquez, who is the person who blew the whistle to us, had taken down presidents and paramilitaries in Guatemala and in Colombia. And he was known as the Robert Mueller of Latin America. He was brought to Guatemala in 2013 — as you mentioned, he had the strong support of Vice President Joe Biden — with the idea that if tens of thousands of unaccompanied minors are arriving at the U.S. border every year, that it’s in the U.S. interest to improve conditions in Guatemala by lessening the amount of corruption and impunity in that country. And so, as you mentioned, Iván Velásquez, shortly after he arrives in Guatemala, he throws the president, Otto Pérez Molina, a former member of the ruling military junta from earlier, in prison for running a customs ring at the airport, his involvement in that.

But, as you mentioned, then Donald Trump comes in office. And we see an entirely different dynamic take place, where these two former television stars, Donald Trump and Jimmy Morales, both with a documented history of racism, band together to kill this anti-corruption force and save themselves.

AMY GOODMAN: I wanted to go to Iván Velásquez himself, the head of CICIG, talking about what happened.

IVÁN VELÁSQUEZ: [translated] President Jimmy Morales tells President Trump, “I understand what you’re going through. You are being persecuted by Robert Mueller in the States. I am being persecuted by Iván Velásquez in Guatemala. I know how much you’ve suffered through all this.” When Ambassador Nikki Haley visits Guatemala, it is an explicit show of support for Morales. She has a series of complaints for me: stop doing press conferences, anonymity. That is what is expected of my role at CICIG. It’s a transaction where both parties seem to win something: You help us by ending this persecution unleashed by the CICIG, and we will help you. And how do you shut down CICIG? By cutting the funds. And that is exactly what happened.

AMY GOODMAN: So, I want to go to March 2018, when then-U.S. Ambassador to the U.N. Nikki Haley spoke to AIPAC, the policy conference in Washington, D.C., and thanked Guatemala for supporting the Trump administration’s decision to recognize Jerusalem as Israel’s capital.

NIKKI HALEY: Last week I took a trip to Guatemala and Honduras. And I thanked them both for voting with us. God bless Guatemala. They’ve even joined us in moving their embassy to Jerusalem.

AMY GOODMAN: So, Anayansi Diaz-Cortes, if you could talk more about this? Then you have Sheldon Adelson chartering a private plane for Morales and the leadership of Guatemala to go to Jerusalem, when the U.S. was recognizing their moved embassy to Jerusalem. How this is all a part of this story?

ANAYANSI DIAZ-CORTES: Well, I think the important thing to remember, Amy, is that this commission was basically set up to do kind of the hard labor, the boring labor, of institution building, after decades of civil war and U.S. involvement in supporting military dictatorships here.

So, you know, when we look at Biden’s support of the CICIG and the contrast to what begins to happen once Velásquez starts going after Jimmy Morales for corruption, then you see lobbying on the part of, you know, Guatemala sending signals to the U.S. to then support the United States in moving the Guatemalan Embassy to Jerusalem as a way to tell Trump, “I understand your suffering. You have Robert Mueller” — like he said, “You have Robert Mueller in the United States. I have Iván Velásquez here. Get the CICIG out of my hair, in exchange for a pliant immigration policy in Guatemala.”

And we see how that timeline takes place, first with Nikki Haley visiting Guatemala and telling Iván Velásquez, “Tone it down. Stop it with the 'I heart CICIG' bumper stickers. Don’t hold press conferences.” And then, kind of days later, she is at AIPAC — with Jimmy Morales there, as well — announcing this, and that leads to a slow demise, over the year, of the CICIG.

It’s also important to just acknowledge that in order for CICIG to work, CICIG can make recommendations based on what they believe should happen, but really it is the attorney general and the Guatemalan Congress who implement these recommendations. So, at some point, Morales, you know, Thelma Aldana, who was the attorney general then, and Velásquez were a dream team. They were kind of working together. The moment that Velásquez goes under Morales’s family, that then changes, right? Morales refuses to stand before a judge, and Velásquez doesn’t back down.

AMY GOODMAN: And Thelma Aldana — people can go to our website at democracynow.org to see our interview with the former Guatemalan attorney general, who then Morales goes after and indicts. And this weekend, Interpol said they’re not going to honor any arrest warrant for her.

ANAYANSI DIAZ-CORTES: That’s correct, Amy. That is correct. And we don’t get into that story in our radio story because there’s so much to get into, but her leaving Guatemala was like a key moment, where suddenly you have the attorney general that Velásquez was working so closely with is no more, as well. So, he’s slowly isolated. And once the U.S. support is taken away, well, CICIG is basically left not only without teeth, but without substance.

AMY GOODMAN: So, if you can wrap this up, Aaron Glantz, and talk about what came of this, what this means that you had Morales surrounded by military tanks, a number provided by the United States, announcing CICIG was being dissolved and Iván Velásquez was being thrown out?

AARON GLANTZ: Well, as you said in your intro and we say in our piece, it was a dark reminder of the days when Guatemala had previously been ruled by U.S.-backed military juntas. And the whole purpose of this international anti-corruption force was to help turn the page and move towards a more just society.

And that was visually — you know, all those military members, the U.S.-provided military vehicles in the streets sent a clear message. When Velásquez leaves the country to attend U.N. meetings in the U.S., he tries to get back in, they won’t let him in. And they send his belongings to Colombia, which is where he’s from, and it’s where Anayansi and I went earlier this year to interview him and get his story.

AMY GOODMAN: Well, we want to thank you so much for being with us. We’re going to link to your story in The Daily Beast at democracynow.org, Aaron Glantz and Anayansi Diaz-Cortes with Reveal from The Center for Investigative Reporting, the piece called “How Donald Trump took down the Robert Mueller of Latin America.”

And that does it for our show. Democracy Now! is produced with Mike Burke, Renée Feltz, Deena Guzder, Libby Rainey, Nermeen Shaikh, María Taracena. I’m Amy Goodman. Thanks so much for joining us. Stay safe. 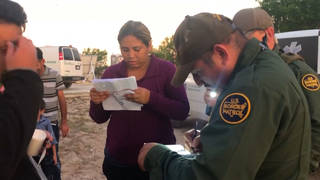