The Biden/Harris Inauguration: When the Wall Becomes a Door Kamala Harris is the first woman, first African American, first Asian American, first Indian American and the first Caribbean American to hold the office of Vice President. As President of the Senate, she swore in Alex Padilla, California’s first Latinx U.S. Senator, appointed to fill the Senate seat she vacated, as well as Georgia’s two new Democratic Senators, Jon Ossoff, the first Jewish Senator from Georgia, and Reverend Raphael Warnock, the first African American Democrat elected to the Senate from the South. The Democrats thus gained control of the Senate, albeit by a razor-thin, 50-50 margin, with Vice President Harris able to cast tie-breaking votes.

All this was made possible by the mass movements that brought these politicians to power. Like the elected officials they supported, movement organizers also wasted no time, announcing pressure campaigns to push the Biden-Harris administration to pursue progressive policies.

Politicians respond to pressure. “Make me do it,” President Franklin D. Roosevelt famously told union and civil-rights organizer A. Philip Randolph, who was demanding help for African-Americans and working people.

“It is a time for Joe Biden to deliver results for the multiracial majority that delivered the presidency to him,” Waleed Shahid, spokesperson for Justice Democrats, said on the Democracy Now! news hour. “We want to see Joe Biden deliver on the four issues that he says he has a mandate on: the pandemic, the economy, the climate crisis and systemic racism.”

The climate-focused Sunrise Movement started with protests focused on Senators Chuck Schumer and Dick Durbin, and a national Sunrise Day of Action on the day after Biden’s inauguration. “In the midst of major crises, including the hottest year on record, a global pandemic, record inequality and a failing democracy, America is at a crossroads,” Sunrise Movement’s Executive Director Varshini Prakash said in a statement. “The Decade of the Green New Deal must start now.” The Sunrise Movement is calling for a massive mobilization to transition our society off of fossil fuels.

The window to enact change is narrow; Democrats control the Presidency, the House, and the Senate, but the 2022 election may shift control of Congress back to Republicans. Senator Bernie Sanders, whose presidential campaign inspired and engaged tens of millions of progressives, is advocating for swift action using a procedure known as “budget reconciliation,” through which major legislation can be passed in the Senate by a simple majority vote, bypassing the filibuster. Sanders is now the chairperson of the Senate Budget Committee, and thus will wield significant influence over Congress’ power of the purse.

Democrats are also hoping to pass H.R. 1, The For the People Act, a bill to strengthen fundamental aspects of our democratic process. It passed the House in 2019, and has languished in the Senate under Mitch McConnell. It would end partisan gerrymandering, make it much easier to register to vote, declare Election Day as a national holiday, provide public funding for campaigns, and more.

This year, state legislatures will use the results of the 2020 U.S. Census to redraw Congressional districts. Republicans control the legislatures in 31 states, where they are expected to carve up districts to maximize their political power, even while representing a minority of U.S. voters. In 2019, the U.S. Supreme Court, in a 5-4 partisan decision, ruled that federal courts could not hear challenges to gerrymandered districts; H.R. 1 would change that.

“This moment is a once-in-a-generation moment for the United States of America, that Joe Biden really could be known historically as one of the most transformative presidents in American history, like a Lincoln, like an FDR, like an LBJ,” Waleed Shahid said on Democracy Now!.

One of Wednesday’s highlights was the nation’s youngest poet ever to read at an inauguration. Amanda Gorman finished writing “The Hill We Climb” just after the violent January 6th attack on the Capitol. It includes the lines,

“We will not be turned around
or interrupted by intimidation
because we know our inaction and inertia
will be the inheritance of the next generation.”

Progressives faced a wall, literally and figuratively, with Donald Trump. With Joe Biden and Kamala Harris, the wall has become a door. Whether it gets slammed shut or kicked open depends on the efforts of mass movements. 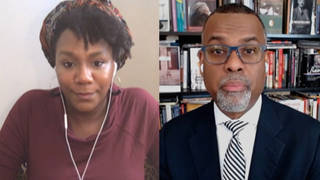