As Democrats in Congress push forward on passing President Joe Biden’s sweeping $1.9 trillion stimulus package, many experts say measures to combat the economic fallout from COVID-19 must address the pandemic’s disproportionate impact on women — especially women of color. Women in the U.S. lost 5.5 million jobs in the first 10 months of the pandemic, nearly 1 million more job losses than men, and, combined with increased responsibilities for caregiving at home, are experiencing a “shecession,” according to researcher C. Nicole Mason. “Women have been disproportionately impacted by job and income losses during the pandemic and during this economic downturn,” says Mason, who is president and CEO of the Institute for Women’s Policy Research, a leading voice on pay equity, economic policies and research impacting women. “The reason for this is because women are overrepresented in the hardest-hit sectors: service, leisure/hospitality, education and healthcare services.”

Democrats are moving forward on President Biden’s $1.9 trillion proposed stimulus package as the United States faces a staggering economic crisis. They plan to use the budget reconciliation process to pass the bill despite Republican opposition, allowing the legislation to take effect before March 14th, when key unemployment programs expire.

There are still some hurdles to be worked out. Biden has said he’s open to negotiating eligibility for receiving $1,400 direct payments included in the bill. But on Saturday, Senator Bernie Sanders, the new chair of the Senate Budget Committee, tweeted his opposition to cutting the income threshold, writing, quote, “Unbelievable. There are some Dems who want to lower the income eligibility for direct payments from $75,000 to $50,000 for individuals, and $150,000 to $100,000 for couples. In other words, working class people who got checks from Trump would not get them from Biden. Brilliant!” unquote. Senator Sanders elaborated Sunday on CNN’s State of the Union.

AMY GOODMAN: This comes as billionaires’ wealth in the United States grew by almost 40% during the pandemic, increasing by more than $1.1 trillion. Biden’s stimulus bill is also set to include a $400-per-week jobless benefit through September and $30 billion for rent and utility assistance.

This comes as data shows women lost about five-and-a-half million jobs over the course of the first 10 months of the pandemic — nearly 1 million more jobs lost than men. Treasury Secretary Janet Yellen spoke about the staggering number of women who have left the workforce since the pandemic began, when she appeared Sunday on CBS’s Face the Nation.

TREASURY SECRETARY JANET YELLEN: The American rescue package that President Biden has proposed really addresses the problems that women face. It places huge emphasis on getting our schools open safely, getting children back into school, providing paid family and medical leave during this crisis so that women don’t have to leave their jobs when they’re faced with health issues or family issues that they have to address. There’s emphasis on providing more child care and payments, tax credits expanded for children to help families address these needs. And I think this is really necessary to get women back to work. They have faced a disproportionate burden because of this crisis, especially low-wage women and women of color.

AMY GOODMAN: Women of color are especially hard hit by job losses during the pandemic, with Black, Latinx and Asian women accounting for all of women’s job losses in December. Combined with women’s increased responsibility for caregiving at home, it’s a trend that could set women back decades and prompted our next guest to call this the first-ever “shecession.”

C. Nicole Mason is the president and chief executive officer of the Institute for Women’s Policy Research, a leading voice on pay equity, economic policies and research impacting women. She’s quoted in a section of The New York Times that came out on Sunday, the whole section, “America’s Mothers Are in Crisis. Is Anyone Listening to Them?”

C. Nicole Mason, thanks so much for being with us. Can you talk about what this economic crisis means for women, what a “shecession,” your term, is?

C. NICOLE MASON: So, this is a historic moment. We have not witnessed a moment like this ever in U.S. history. So, the “shecession” is about making sure that we understand that women have been disproportionately impacted by job and income losses during the pandemic and during this economic downturn. And the reason for this is because women are overrepresented in the hardest-hit sectors. Service, leisure/hospitality, education and healthcare services have been hit hardest during this downturn, disproportionately impacting, again, low-wage workers and women of color.

AMY GOODMAN: So, talk about why women are so hard hit right now and how in this country this is really being overlooked — certainly not by the women themselves, who are being crushed, losing their jobs, having to care for parents, having to care for children — what this means, setting women back decades.

C. NICOLE MASON: So, what this means is, so, the reason why women, like I said, are disproportionately impacted is because they’re overrepresented in the hardest-hit sectors. And when stay-at-home orders were implemented, businesses closed down, and that disproportionately impacted women, and then also schools and daycares closed down. So women had this dual burden of providing for their families and earning a living, but also caretaking responsibilities.

So, in the beginning, I don’t really believe that we really took it seriously in terms of the impact of school closures on working women. But we saw, for example, in August, 865,000 women fell out of the workforce. And people asked me, they said, “Well, you know, why do you think that is?” I said, “It’s a no-brainer.” Schools were supposed open in August and September, and they didn’t. And women had to make some tough choices.

AMY GOODMAN: You wrote in a recent piece, “At the first of the year, we celebrated women’s economic gains, when they made up a little more than 50% of the workforce. The pandemic has all but wiped out those gains and made it more difficult for women to reenter the workforce and sustain employment.” Explain.

C. NICOLE MASON: So, again, at the beginning of the year in 2020, in January, we were celebrating this milestone. And then the pandemic hit, and more than 2 million women fell out of the workforce, at four times the rate than men.

In 2008, when the economic recession hit, it mainly impacted manufacture and production and construction, again, disproportionately impacting men.

So, but this time around, not only were women losing jobs at a clip, they were also managing virtual learning with their children. And women were told, during this time, you know, like, “Oh, you’ll figure it out. Oh, it’s not that big a deal.” And in terms of reopening and stay-at-home orders, we put a lot of focus on small businesses, which I think is right, but there was very little attention paid to getting schools open. And so, that has had a disproportionate impact on women, because without schools and daycares and the pandemic under control, they will continue and have continued to fall out of the workforce.

AMY GOODMAN: So, as this debate on the $1.9 trillion COVID crisis, economic crisis package takes place, what is missing? What do you think needs to happen particularly to protect women?

C. NICOLE MASON: So, there are a lot of good things in that package. So, you heard Janet Yellen talking about all the good things in there or smart things in there for women — you know, the expanded unemployment insurance, the housing and food assistance moneys in there, paid family and sick leave. All these things will go a long way towards ensuring women who cannot reenter the workforce because of caretaking responsibilities or simply can’t find a job, because many women have been unemployed for 27 weeks or more, that they have a lifeline. So that’s really important.

And I think the second part of the stimulus package, which we’ll see, I think, in the coming weeks and months, is job creation. So, there will be a concerted effort on job creation. And oftentimes, like in 2008, there was a concerted effort around infrastructure, production, manufacturing, getting people back to work. This time around, we’re going to need to focus on those hardest-hit sectors, where women have been most affected and impacted, and then also dedicate some funds to education and training, because, you know, to be honest, Amy, some of those jobs that we lost are not going to be able to come back until women will have to enter new sectors altogether.

AMY GOODMAN: And what about the $15 minimum wage increase that was included in Biden’s stimulus bill proposal? Some say it cannot be included if Democrats want to use the reconciliation process to pass it, because that rule can only be used for bills concerning spending, taxes and debt. But Senator Bernie Sanders, chair of the Budget Committee, argued that it does comply with the budget reconciliation process. Can you comment?

But I will say, Amy, that raising the minimum wage to $15 is only a small part of this deal here. We also need to make sure that these jobs are quality jobs, because the most devastating thing during the pandemic is that when women lost their jobs, they also didn’t have paid sick leave. They didn’t have other benefits that we know make the difference for working families. And so, in addition to the $15 an hour, we also need to make sure that they have paid and family sick leave and also have better job security and flexibility. All these things are critical issues during the pandemic for working women.

AMY GOODMAN: C. Nicole Mason, I want to thank you so much for being with us, president and chief executive officer of the Institute for Women’s Policy Research. She coined the term “shecession.” And by the way, give your dog a kibble from me. 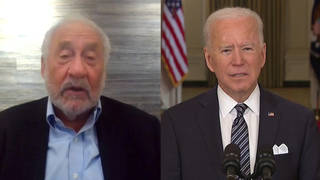