As the Palestinian death toll in Gaza tops 200, the leading Israeli human rights group B’Tselem is accusing Israel of committing war crimes by killing blockaded civilians and destroying infrastructure on a massive scale. Executive director Hagai El-Ad says Israel has not done enough to distinguish between military and civilian targets or to act with proportionality. “We’ve seen war crimes in previous military assaults on Gaza,” he says. “And, in fact, the impunity of the previous times in which war crimes were committed is what has paved the way for the continuation of more such crimes being committed.” Earlier this year, B’Tselem released a landmark report denouncing Israel as an “apartheid regime.”

As the Palestinian death toll in Gaza tops 213, the leading Israeli human rights group B’Tselem is accusing Israel of committing war crimes by killing blockaded civilians and destroying infrastructure on a massive scale.

On Monday, I got a chance to speak with Hagai El-Ad in Jerusalem. He’s the executive director of the human rights group B’Tselem. Earlier this year, B’Tselem released a landmark report denouncing Israel as a, quote, “apartheid regime.” I began by asking Hagai to respond to what’s taking place now in Israel and the Occupied Territories.

HAGAI EL-AD: It’s becoming difficult to count the number of military assaults by Israel on the Gaza Strip, so 2008, 2009, and then 2012, and then 2014, and now 2021. We’re at the beginning of week two of this assault. And I think we should all be reminded that back in 2014, seven years ago, the military operation lasted some seven weeks, with more than 2,000 fatalities in Gaza, more than 500 of them children. So, this is already horrific, but we should also bear in mind that it has gotten much worse in the past, and God forbidden that this will be allowed to continue in the way that it has been allowed to continue in the past.

AMY GOODMAN: So, where is Israeli society on this, the Israeli Jewish community, at this point?

HAGAI EL-AD: Israeli society, first, is receiving on domestic media a very different view than what people are experiencing in Gaza and what people are seeing around the world. Israeli media, not because of military censorship, but because of self-censorship, is reporting on Hamas rockets attacking Israeli civilians inside Israel, as indeed they should report on that, but they are barely reporting about the situation in Gaza. So, from the perspective — and this also is not new. This has been that one-sided reporting domestically by Israeli media, almost all of it, certainly Israeli TV, also in the previous Israeli assaults on the Gaza Strip. It’s a story of Israel under attack. And it’s almost never a story about the situation in the Gaza Strip.

HAGAI EL-AD: We’re saying that because that is the way it is. And I feel almost embarrassed to try and quote the relevant aspects of international law that are meant to protect civilians at times of war. To talk about distinction and proportionality, the two key principles of international law, they seem to crumble in the face of Israeli strategies of the way the Israeli army is using military force in the Gaza Strip again and again and again and again and again. This is not new. We’ve seen this before, with horrific consequences. We’ve seen war crimes in previous military assaults on Gaza. And, in fact, the impunity of the previous times in which war crimes were committed is what has paved the way for the continuation of more such crimes being committed.

So, for instance, if one thinks for a second about attacks on wiping out residential towers, apartment buildings, in apartment towers in the Gaza Strip, where, in a second, dozens of families lose their homes, how can that be a military target? How is that consistent with the principle of distinction? And the Israeli army then explains that there’s been — there’s a Hamas office in that building. Well, if that is the case — and not always, if ever, they provide convincing evidence that that is indeed the case, but let’s assume for a second that it is — how is that attack proportional, right?

AMY GOODMAN: I want to turn to Prime Minister Netanyahu. After speaking to President Biden on Saturday, he vowed Israel would continue to strike Gaza as long as necessary.

PRIME MINISTER BENJAMIN NETANYAHU: [translated] We will continue to act with full force. We are hitting the terrorist organization with crushing blows. Whoever lit the fire will receive fire. … But unlike Hamas, which deliberately intends to harm civilians while hiding behind civilians, we are doing everything but everything to avoid, or limit as much as possible, harming civilians and to directly strike terrorists instead. … [in English] Israel has responded forcefully to these attacks, and we will continue to respond forcefully.

AMY GOODMAN: That is the indicted, now on trial for corruption, Prime Minister of Israel Benjamin Netanyahu. Hagai El-Ad, your response?

HAGAI EL-AD: It’s outrageous propaganda, as was used, again, in the past, to try and whitewash war crimes against a defenseless civilian population in the blockaded Gaza Strip. And again, it’s painful to speak from this experience, but we can already project the way the Israeli army and legal system will in the future, if they have to, try and explain away what has happened.

Think about some of the most horrific incidents of the current assault on Gaza, the bombing of a number of homes in Rimal, with more than 40 fatalities, and they’re still digging in the rubble, and perhaps that horrific number will continue to rise. What the Israeli army eventually is going to say, if they will have to, is that this has been a legal assault because they thought it was a military target, and they didn’t know some of the aspects of the expected collateral damage. So they would say it followed both distinction and proportionality, because they didn’t know.

AMY GOODMAN: That’s Hagai El-Ad in Jerusalem, executive director of the Israeli human rights group B’Tselem. To see the full interview, go to democracynow.org. We’ll also link to his new piece in The Washington Post headlined “Israel has chosen a two-tiered society. Violence is the inevitable result.” And we’ll link to his report charging Israel with apartheid.

This is Democracy Now! When we come back, general strike in the West Bank and throughout Israel. Stay with us. 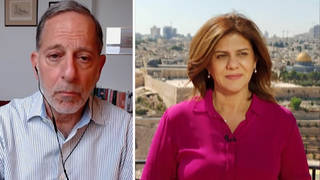