While the ceasefire continues to hold between Israel and Gaza, Israel is cracking down on Palestinians living in the occupied West Bank, occupied East Jerusalem and inside Israel. The newspaper Haaretz reports Israeli police have arrested nearly 2,000 Palestinians over the past month in an attempt to quell protests and uprisings against the occupation.

On Saturday, Israeli police arrested Al Jazeera reporter Givara Budeiri as she covered a protest in Sheikh Jarrah. During the arrest, officers broke her hand and destroyed the equipment of her camera operator. She was also reportedly beaten while being taken to an Israeli police interrogation center.

On Sunday, police in East Jerusalem detained both Muna and Mohammed El-Kurd. The 23-year-old twins have been helping to lead efforts to fight the eviction of Palestinians living in the Sheikh Jarrah neighborhood of Jerusalem where their families live. Jewish settlers already live in part of their home. Mohammed spoke out after he and his sister were released Sunday night.

MOHAMMED EL-KURD: What happened today was a clear tactic of intimidation. The Israeli occupation clearly doesn’t want anybody to be speaking about the abuses it’s doing against the Palestinian residents in Sheikh Jarrah and Silwan. But we are not afraid. We are unintimidated. We are going to continue to speak out against all of these injustices. And we’re going to continue to protect our homes.

AMY GOODMAN: Just as we went to air on Democracy Now!, residents of Sheikh Jarrah were dealt a legal setback, making it more likely the Palestinians will be evicted.

We go now to the West Bank city of Ramallah, where we’re joined by Mariam Barghouti, Palestinian writer and researcher.

MARIAM BARGHOUTI: Hi. Thank you for having me again, Amy.

So, right now the attorney general of Israel basically said that they will not be involved with the case of Sheikh Jarrah and the decision is left to the Israeli Supreme Court. The excuse is that the case of the families is “too weak” to actually solicit successful resolution for the families, the Palestinian families of Sheikh Jarrah. But at the same time, this is an entire legal system that is built on ensuring the erasure of Palestinians, so of course the case is going to be too weak. And I think it would have been false to also assume that the attorney general of Israel would help in bringing out any other result for Palestinians.

AMY GOODMAN: So, right now what does this mean for people like, well, the Palestinian twins, Muna and Mohammed? They were arrested yesterday, first Muna, and then Mohammed turned himself in. What were they interrogated about? They have been released since.

MARIAM BARGHOUTI: They have been released since then. And in terms of the interrogation, well, the charges that they are — that are being put in front for the twins, who are 23 years old, is participating in activities which impact the security of the state of Israel and in participating in riot acts with a nationalistic motive. And let’s emphasize on this, this nationalistic motive is basically any Palestinian saying, “We’re Palestinian,” especially for those who hold Israeli citizenship or a Jerusalem ID.

Israel’s interrogation tactics are for intimidation. They are for coercion. And often they have Palestinians sign false confessions in Hebrew, knowing very well that the person in front of them, the Palestinian, doesn’t speak Hebrew. So, it’s not just Mohammed and Muna El-Kurd. This is the same tactic that’s being used against all Palestinians. Two others were also arrested with them, Iyad Abu Sneineh and Zuhair Rajaby, who are from Silwan. And it shows you how Israel is targeting all Palestinian neighborhoods that are confronting their forced expulsion.

AMY GOODMAN: Some people might be very surprised to hear all of this. They might be saying, “Wait a second. I thought there was a ceasefire between Israel and Gaza, that the violence is over.” That’s how it’s described in the mainstream media. So, if you can describe what continues to happen since? You have Mohammed reporting on Saturday that Jewish settlers were throwing stones at his house, that the Israeli police were standing by. If you can talk about the settler-police relationship and also what happened to the Al Jazeera reporter?

MARIAM BARGHOUTI: Right. So, in terms of Givara Budeiri, she was violently attacked by Israeli police in Jerusalem as she was trying to cover the developments happening in Sheikh Jarrah, knowing very well that Israel is trying to give a blackout on Palestinians.

And in terms of the ceasefire, this is a ceasefire where Israel agrees not to bomb Gaza, but the besiegement of Gaza continues. The healing and rebuilding and recovery process is inapplicable right now, until the siege is lifted and removed.

In terms of attacking Palestinians in the West Bank, in Jerusalem, in other Palestinian cities, such as Haifa and Safad and Akka, it continues. And the Israeli police basically provides protection for settlers but also joins them in the violence. Three weeks ago, you had Israeli police dressed in civilian clothing so they can join the settler mobs chasing Palestinians, screaming “Death to Arabs!” So, it’s continued.

And Givara Budeiri, the Al Jazeera correspondent, who was violently attacked and taken into interrogation despite being press — let’s remember Israel bombed Al Jazeera offices, Associated Press offices in Gaza on live television. And just yesterday, they threw a stun grenade on another correspondent with Al Jazeera, Najwan Samri, which injured her in the leg.

AMY GOODMAN: I wanted to go to Givara herself, the Al Jazeera journalist Givara Budeiri, describing her arrest and the breaking of her hand on Al Jazeera.

GIVARA BUDEIRI: They broke my hand. I spent all the night in the hospital. My back hurt me a lot. And here, my hand, from the cuffs, also they hurt so much, because the soldiers in the car were tightening it all the time. I have a headache. And my leg — I can’t walk very well.

AMY GOODMAN: So, if you can also talk about, overall, the cracking down on Palestinians living in the occupied West Bank, in occupied East Jerusalem, inside Israel, thousands of arrests in the last month?

MARIAM BARGHOUTI: That’s true, there have been thousands of arrests. Just this morning, 17 Palestinians were taken into arrest overnight in raids on their homes, where families were beaten, children were terrorized. I know a couple of incidents with friends who are speaking how their children are just completely horrified of the violence of Israeli forces.

And this is all coming as part of Israel trying to “settle the score,” as the police said, for everyone that spoke up against their ethnic cleansing. Israel is criminalizing our right to say we’re Palestinian, our right to say we want to live in our homes in dignity, our right to be free. And it is doing it by using legal violence. It is doing it by using economic violence. A lot of the detainment of Palestinians is also so they can fine them or let them pay bail. So, they’re trying to sustain these horrifying measures by letting Palestinians or forcing Palestinians to kind of cover the expenses of it.

AMY GOODMAN: So, as we speak — and we just have a minute and a half to go — I wanted to ask you about the forming of this new government, the Israeli Prime Minister Benjamin Netanyahu claiming, without evidence, sounding exactly like Trump, that the election was rigged, Trump saying it right about the same time in his first speech that he gave in North Carolina. Netanyahu was saying that the election was marred by the biggest election fraud in the history of any democracy, his remarks drawing comparisons, of course, to Trump. But I wanted to ask you about the new government, the deal that would see far-right politician Naftali Bennett serve as prime minister for two years, followed by the opposition leader Yair Lapid for two years after that. Bennett previously led the Israeli settler movement in the occupied West Bank, calling for annexation of Palestinian lands, opposes a Palestinian state, has compared Palestinian citizens of Israel to a fifth column.

MARIAM BARGHOUTI: Right. Well, I think the new — quote-unquote, “new” government isn’t really new. It is just a lot more blunt in its racist measures. It’s a lot more blunt in its colonial measures. Let’s not forget that Netanyahu used to constantly say that they are the ones that dictate the rules, and Palestinians will remain Palestinian subjects.

AMY GOODMAN: And also, if you could talk about, for the first time, the United Arab List joining this coalition that would rule?

MARIAM BARGHOUTI: Right. So, at this point, what we need to look at is the demands of Palestinians for justice and freedom. Anyone that doesn’t represent that, we need to look at as aiding and abetting Israeli apartheid and persecution of Palestinians. So, sometimes we might get misguided in the labels, but, in the end, let’s look at the reality on the ground, on the actions on the ground, and holding accountability for Palestinians against the criminals that are perpetuating this.

AMY GOODMAN: Mariam Barghouti, I want to thank you so much for joining us from Ramallah, Palestinian writer and researcher. I’m Amy Goodman. Stay safe. 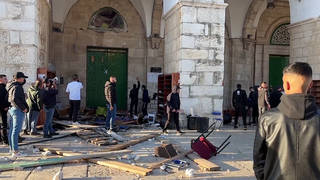