Six people in Atlanta have been charged with domestic terrorism for taking part in protests against a massive new police training facility known as Cop City. The protesters were taking part in a months-long encampment in a forested area of Atlanta where the city wants to build a $90 million, 85-acre training center on the site of a former prison farm. Conservationists have long wanted to protect the area, the South River Forest, from future development. Protesters are also urging the city to invest in alternatives to more policing. “This is basically a boondoggle that’s been given to the police to make them feel better,” says Kamau Franklin, founder of Community Movement Builders, which is a part of a coalition trying to stop the construction of Cop City in Atlanta.

AMY GOODMAN: This is Democracy Now!, democracynow.org. I’m Amy Goodman, with Juan González, as we end today’s show in Atlanta, where five people have been charged with domestic terrorism for taking part in protests against a massive new police training facility known as Cop City. The protesters were taking part in a months-long encampment in a forested area of Atlanta where the city wants to build a $90 million, 85-acre training center on the site of a former prison farm.

Conservationists have long fought to protect the area, the South River Forest, from future development. Protesters are also urging Atlanta officials to invest in communities, not more policing. This is Jasmine Burnett of the group Community Movement Builders.

JASMINE BURNETT: People are asking for affordable housing, paving the streets — right? — having sidewalks, better access to MARTA. And instead, they are supporting a project, a $90 million project, to construct the largest urban warfare training facility in this country.

AMY GOODMAN: We go now to Atlanta, Georgia, where we’re joined by Kamau Franklin, the founder of Community Movement Builders, part of the coalition trying to stop the construction of Cop City in Atlanta.

Kamau, welcome to Democracy Now! We knew you in New York when you were part of the Center for Constitutional Rights. You’ve moved to Atlanta. Talk about the significance of what’s happening now and five activists being charged with — domestic terrorism?

KAMAU FRANKLIN: Yes. Thank you for having me.

And as an update, it is now six activists. A day after the initial raid, another raid was done, and another activist was arrested and is now being charged.

So, we think these charges are setting up, really, the idea of criminalizing dissent around Cop City. So far, these activists have been denied bail. There’s a second bail hearing that is coming up. But because of the outrageous charges, the very generalized charge of domestic terrorism under Georgia law, that these folks are still being held.

And this has been a concerted effort by law enforcement agencies from the city, the Atlanta Police Department; the county, DeKalb Police Department; the state, the Georgia Bureau of Investigation; at the federal level, the Homeland Security and FBI — have all been involved in a task force which is targeting these organizers and activists on the ground for being opposed to Cop City.

JUAN GONZÁLEZ: And what are the specific actions that they allegedly have taken to warrant these kinds of charges?

KAMAU FRANKLIN: Well, the interesting thing about these arrests is that these arrests were basically a push in the forest to destroy everything that was built in terms of a resistance movement, a group of folks that we call the Forest Defenders, in terms of the loose coalition of people who have actually moved in the forest or who spend days in the forest camping out as an act of civil disobedience. Remember, Georgia is the place where John Lewis and “good trouble” is supposed to be accepted. But civil disobedience in the forest is something that is not accepted when the police want to build a highly militarized training ground.

And so, while these folks were just in part of their encampment, they were raided by the police, again, by the Georgia Bureau of Investigation. Folks were sitting, literally sitting in tree huts, where they were — all of their camp equipment was destroyed. Rubber bullets were used. Guns were pointing at their head. They were involved at that particular time in no activity whatsoever, except for the act of being in the forest. And they all were taken in and then charged in this sort of RICO or conspiracy idea that the act of protest, the act of civil disobedience, direct action, is something that’s now being criminalized, in a statute that really doesn’t get used in Georgia, but it’s been on the books for a number of years. And so, these folks were doing absolutely nothing but being in the forest as Forest Defenders at the time of their arrest.

JUAN GONZÁLEZ: And could you tell us a little bit more about Cop City? I mean, how did this idea originate? Who backed it? What politicians were behind it?

And it was during that time that Keisha Lance Bottoms, then the former mayor of Atlanta, and the City Council, along with the Atlanta Police Foundation, the Atlanta Police Department, the police union, came up with the idea to give basically a gift to the police to make them feel better, as a way of changing the narrative. And as we’ve seen over the last few years since the George Floyd uprisings, both Democrats and Republicans, elected officials, private companies — the same private companies that claimed that they were supporting Black Lives Matter — have put literally tens of millions of dollars into funding this police apparatus, this Cop City.

And so, during that time period of shortly after the uprisings, the idea was came up with that we should — “we” being Atlanta — should give this gift to the police of this training center, which, again, is basically — as Jasmine stated in your clip, is an urban warfare center, where there are going to be over a dozen shooting ranges. There’s going to be an explosive range. There are going to be mock cities to practice urban warfare. There’s going to be a helicopter pad for Black Hawk helicopters to land.

So, this is being done right in the middle of a working-class and poor Black city — I mean, Black area, in Atlanta, one of the last left intact. And so, this is all planned around changing the narrative, talking about crime and how this facility is going to be used to fight crime, which is, you know, a lie on its face, because this facility, even without protests, would take four to five years to build. So this is basically a boondoggle that’s been given to the police to make them feel better, to change the narrative from abolishing or defunding the police to one in which now the police are needed to solve acts of crime.

AMY GOODMAN: So, can you talk about, Kamau Franklin, the alternatives to militarize police that your group and the whole coalition is calling for? And what’s going to happen to these six activists charged with domestic terrorism? We just have a minute.

KAMAU FRANKLIN: Yeah. I mean, our groups have called for alternatives to policing in terms of having outside agencies that are called if there’s mental health issues, if there’s homeless issues. On a more radical end, we’ve actually called for our communities having the ability to control any policing that happens, which means the ability to hire or fire policing, to discipline police in our communities. We’ve called for community copwatches, where we watch the police, safety walks, where we create other avenues of safety which are not around the police.

So, we are continuing to supporting the organizers and activists who were arrested. We are gathering bail funds as we speak. We’re getting lawyers for these folks. Again, another bail hearing is scheduled for the 27th. So, right now we need as much solidarity and support as possible to support these folks and to continue to fight against Cop City being built.

AMY GOODMAN: Activist attorney Kamau Franklin is founder of the organization Community Movement Builders, speaking to us from Atlanta, Georgia.

And our condolences to our dear colleague Simin Farkhondeh on the death of her mother. We’re all with you, Simin.

I’m Amy Goodman, with Juan González. Check out our transcripts, our podcasts at democracynow.org. Thanks so much for joining us. 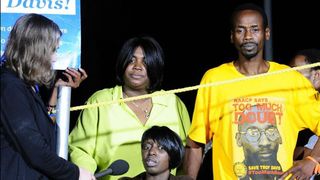