President Biden on Friday nominated federal Judge Ketanji Brown Jackson to the U.S. Supreme Court to fill Justice Stephen Breyer’s pending vacancy. If confirmed, she would be the first Black woman to serve as a Supreme Court justice. We speak with Harvard constitutional law professor Tomiko Brown-Nagin about the nomination of the 51-year-old federal judge and the parallels between her and the first Black woman federal judge and civil rights legal icon Constance Baker Motley, who was at one point eyed for a Supreme Court nomination.

President Biden made history Friday, nominating federal Judge Ketanji Brown Jackson to the U.S. Supreme Court. If confirmed, she would be the first Black woman to serve as Supreme Court justice. She would also be the fourth person of color, the sixth woman of the 115 justices in the high court’s history. Judge Jackson previously served as a clerk for Justice Stephen Breyer, who announced his retirement in January. While running for office, Biden promised to nominate a Black woman for the Supreme Court. This is Judge Brown Jackson speaking Friday at the White House after accepting Biden’s nomination.

JUDGE KETANJI BROWN JACKSON: If I am fortunate enough to be confirmed as the next associate justice of the Supreme Court of the United States, I can only hope that my life and career, my love of this country and the Constitution, and my commitment to upholding the rule of law and the sacred principles upon which this great nation was founded will inspire future generations of Americans.

AMY GOODMAN: Before she was a judge, Ketanji Brown Jackson worked on behalf of Guantánamo prisoners as an assistant public defender. She went on to become a federal trial judge and currently sits on D.C.'s federal appellate court. Judge Jackson ended her address Friday by talking about Constance Baker Motley, who in 1966 became the nation's first Black woman to serve as a federal judge.

JUDGE KETANJI BROWN JACKSON: As it happens, I share a birthday with the first Black woman ever to be appointed as a federal judge, the Honorable Constance Baker Motley. We were born exactly 49 years to the day apart. Today I proudly stand on Judge Motley’s shoulders, sharing not only her birthday but also her steadfast and courageous commitment to equal justice under law. Judge Motley’s life and career has been a true inspiration to me as I have pursued this professional path. And if I am fortunate enough to be confirmed as the next associate justice of the Supreme Court of the United States, I can only hope that my life and career, my love of this country and the Constitution, and my commitment to upholding the rule of law and the sacred principles upon which this great nation was founded will inspire future generations of Americans.

For more, we’re joined by Tomiko Brown-Nagin, dean of Harvard University’s Radcliffe Institute, professor of constitutional law at Harvard Law School, member of the History Department at Harvard. She’s also the author of the book Civil Rights Queen: Constance Baker Motley and the Struggle for Equality, which just came out this month.

Welcome to Democracy Now!, Dean. If you could start off by talking about the significance of the nomination of Ketanji Brown Jackson to the Supreme Court?

TOMIKO BROWN-NAGIN: Happy to, Amy. This moment has been a long time coming, and now that it’s finally arrived, it is a great historic moment for our country. I am very proud to see this appointment — or, nomination, rather — that validates the long struggle for equal workplace opportunity. And it’s especially important to validate that principle at the U.S. Supreme Court, the institution that of course is charged with interpreting our Constitution and laws. It is a great moment, and I’m proud to witness it.

AMY GOODMAN: Can you talk about her history and then talk about the right-wing attack on President Biden for saying he would nominate a Black woman?

TOMIKO BROWN-NAGIN: Yes. Well, she is a well-qualified, eminently qualified nominee. She earned her educational credentials at Harvard College and then Harvard Law School, graduating with honors, and then clerked for several justices — judges, rather, and Justice Breyer. She has vast and relevant legal experience, having worked for the U.S. Sentencing Commission, for private law firms and for the public defender’s office. And it is that latter experience that is raising some controversy on the part of some conservatives who are claiming that that experience as a public defender is somehow disqualifying for someone who would serve on the U.S. Supreme Court. And I disagree.

AMY GOODMAN: I want to go back to 1993. The Supreme Court Bar gathered to honor the late Supreme Court Justice Thurgood Marshall. It was Judge Motley who spoke at the event.

JUDGE CONSTANCE BAKER MOTLEY: The first time I came to this court was February the 15th, 1948, when, as a member of Thurgood Marshall’s staff at the NAACP Legal Defense and Educational Fund, I came here to Washington to hear his argument in the restrictive covenant cases. Those cases resulted in a decision by the Supreme Court barring state enforcement of racially restrictive covenants in residential areas. At that time Washington was a segregated town. We could not stay in white hotels or eat in white restaurants. Even the cab service was segregated.

AMY GOODMAN: So, that is the late great Constance Baker Motley. And you certainly are a scholar of her life. Your book just came out. It’s called Civil Rights Queen: Constance Baker Motley and the Struggle for Equality. Talk about the significance of what happened, what, more than half a century ago and the fact that Ketanji Brown Jackson raised her in accepting the nomination on Friday.

TOMIKO BROWN-NAGIN: Well, I think it was a sign of good character on the part of Judge Jackson for pointing to what I have been saying, which is that this nominee would stand on the shoulders of Constance Baker Motley, who, when she was appointed by President Johnson in 1966, accomplished something historic: the first Black woman appointed to the federal bench.

And I will note that although she, too, was eminently qualified, there were those who attacked her and said that she should not be appointed, precisely because of her work defending the civil rights movement. There were those who said that because of that experience, she couldn’t be fair to all litigants. And that criticism followed her onto the bench. And in one of her most well-known decisions, she rejected a demand from an attorney to recuse from a discrimination case on the grounds that, as a Black woman, she couldn’t be fair, and, as a civil rights lawyer, she couldn’t be fair, arguing that identity alone is not a basis for rejecting a judge in a case. And it is a decision that has been cited time and time again to reject criticisms of judges based on their practice background, on their race, sex, sexual orientation and so forth.

AMY GOODMAN: Can you talk more about Constance Baker Motley’s life and the parallels you see to today? It is always difficult, fraught, when you say someone is nominated as the first, when this should have happened so long ago.

TOMIKO BROWN-NAGIN: It really should have, Amy. And I very specifically am stating that this nomination validates equal workplace opportunity, because for so long we have not done that. There has been a pushback against qualified nominees in a variety of areas, including the federal judiciary, as I just mentioned, on grounds that amount to ideological attacks.

Motley, she was one of the chief legal tacticians for the civil rights movement, working alongside her mentor, Thurgood Marshall. She helped to litigate Brown v. Board of Education and a variety of other landmark civil rights precedents, including ones that desegregated public education in the South. She argued and won nine of 10 cases at the Supreme Court, including a precedent on behalf of the right to counsel for criminal defendants. She was just a superstar in terms of her professional success.

And certainly one could say the very same thing about Judge Jackson. Her experience — the variety of experiences she has had as a lawyer are just terrific to see, and I am especially happy that she would be the first justice since Thurgood Marshall to have represented criminal defendants. The service of public defenders is vital to our constitutional system. Of course, they help to validate the Sixth Amendment to the Constitution. Effective assistance of counsel is vital to the legitimacy of our entire legal system, and thus I truly am puzzled by those who are pushing back against her on the basis of her having served that role. Our Bill of Rights is sacred, many would say in other circumstances, and Judge Jackson was helping to affirm the values and the rights in that set of amendments to the Constitution through her role.

AMY GOODMAN: Well, I want to thank you so much for being with us, Tomiko Brown-Nagin, dean of the Harvard Radcliffe Institute, professor of constitutional law at Harvard Law School, member of the History Department at Harvard University. Her new book, Civil Rights Queen: Constance Baker Motley and the Struggle for Equality. 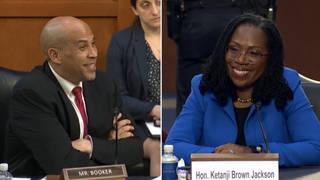 “You Are My Harbinger of Hope”: Sen. Cory Booker Defends Ketanji Brown Jackson Amid GOP Attacks