As the Russian military escalates its invasion in Ukraine, Russian police are cracking down on antiwar protesters at home, arresting more than 8,000 over the past eight days. Meanwhile, Russia’s lower house of parliament has passed a new law to criminalize the distribution of what the state considers to be “false news” about military operations, and remaining independent news outlets in the country are shutting down under pressure from the authorities. We speak with Vladimir Slivyak, co-chair for the leading Russian environmental organization Ecodefense, who won the 2021 Right Livelihood Award — the “alternative Nobel Peace Prize” — for defending the environment and mobilizing grassroots opposition to the coal and nuclear industries in Russia. Slivyak describes Putin’s attempts to shut down independent media within Russia and the “pure propaganda” his regime is spreading on state-sponsored media to justify the invasion of Ukraine.

AMY GOODMAN: This is Democracy Now! I’m Amy Goodman, as we turn to look at Russia’s escalating crackdown domestically following its invasion of Ukraine. More than 8,000 antiwar protesters have been arrested since Russia began the attack. Meanwhile, Russia’s lower house of parliament has just passed a new law to criminalize the distribution of what the state considers to be “false news” about military operations, like calling the attack “war.” Violators of the law could face 15 years in prison.

Still with us, Vladimir Slivyak. He is co-chair of the leading Russian environmental organization Ecodefense, won the 2021 Right Livelihood Award, the “alternative Nobel Peace Prize,” for defending the environment and mobilizing grassroots opposition to the coal and nuclear industries in Russia.

Vlad, your response to the antiwar protests across Russia? Thousands have been arrested. And talk about what people understand, what is the feeling in Russia, and Putin’s crackdown.

VLADIMIR SLIVYAK: Well, first of all, I think it’s very hard to imagine, for people in the West or in the U.S.A. or European Union, how Russian propaganda is working. I mean, you’ve got an access to different sources of information, to different TV channels, and Russians don’t have this. The big majority, like over 70% of Russians, are just watching the first channel on the TV, which is state-controlled and that put out all kinds of propaganda, anti-Ukrainian propaganda, to make people believe that in Ukraine something bad is happening to Russian-speaking people, which is absolutely not true and just a pure propaganda to justify this invasion.

But, I mean, I was a bit surprised, actually, that even in a dictatorship country like Russia — and Russia is dictatorship today — people actually went to protest, and the thousands of people went on the street. And, I mean, although it’s still not that mass protest, but even this number — I mean, I think it’s well over 10,000 of people that went to protest since the beginning. Well, it’s pretty impressive, taking into account what’s going on in Russia, how media controlled, how much repression is there right now. That’s my take.

AMY GOODMAN: And what about the media outlets that have been shut down, like Rain, like Echo of Moscow? Explain their significance.

VLADIMIR SLIVYAK: Well, it is very significant. Independent media are not big, unfortunately. And that’s because over the last decade Putin was basically shutting down every influential independent media in the country. And those two are — well, right now we have only one more or less independent media in the country, which is Novaya Gazeta, or a New Newspaper, if you translate it, which still puts a lot of antiwar propaganda — or, not propaganda, but antiwar information. So, we are left with only one newspaper that presents alternative point of view. And I think it could be shut down, as well. But the Echo Moscow and the TV Rain being the main sources of information, of alternative to governmental information, to — well, in a country like Russia, with 150 million of people, now people cannot really get this alternative information anymore.

AMY GOODMAN: And it’s also interesting to note that in occupied Kherson now, in the south of Ukraine, that the Ukrainian television has been turned off, and they’re now getting Russian government media.

VLADIMIR SLIVYAK: Yeah. Well, I mean, Putin, for a very long time, been doing, well, a crackdown not only on the civil society but also on the free media. And, I mean, what we see today in Russia is a result of this policy, when all structures of a civil society are basically destroyed and there are now almost no organizations left who can actually organize mass protests, and Putin also shutting down free media so people cannot get independent information. And, yes, this is exactly what he will do to Ukraine if he will ever take it over.

AMY GOODMAN: I wanted to ask you about Dmitry Medvedev, the deputy head of Russia’s Security Council, chaired by Putin, who also warned that Moscow could restore the death penalty, after Russian was removed from Europe’s top rights group, the U.N. human rights group — a chilling statement that shocked human rights activists in a country that has not had capital punishment for a quarter of a century. I’m reading a report.

VLADIMIR SLIVYAK: That is absolutely shocking. But looking at what Russian regime or Putin regime been doing over last decade, unfortunately, it doesn’t look like impossible. I think Russians can do — I mean, Russian regime can do this.

AMY GOODMAN: I wanted to just comment that after Rain TV finished their final broadcast, they put on a loop of Swan Lake. This was an explicit reference to something Soviet authorities did when they wanted to bury bad news, including the 1991 coup attempt that led to the dissolution of the Soviet Union. Vlad?

AMY GOODMAN: Finally, Vlad — we have 30 seconds — the significance of the increasing sanctions against the leadership in Russia?

VLADIMIR SLIVYAK: That is very powerful sanctions. And it is very good that the international community introduced so powerful sanctions. It’s hitting Russian economy very much. And I think, in this situation, that’s the only way to stop war, to cut out resources for continuation of war for Putin regime.

AMY GOODMAN: Are you concerned that increasing the sanctions could lead Putin to take more drastic action?

VLADIMIR SLIVYAK: I think if the rest of the world will not cut out resources for Putin regime, this regime will go into more wars, and there will be bigger war in Europe. So I support every sanction against Putin regime.

AMY GOODMAN: Are you afraid to go back to Russia?

AMY GOODMAN: Vladimir Slivyak, I want to thank you for being with us, co-chair of the leading Russian environmental organization Ecodefense, Right Livelihood Award winner.

When we come back, we’re going to go to where we started, and that’s Ukraine. We’re going to speak with a Ukrainian American journalist who says the Ukraine of his childhood is being erased. Stay with us. 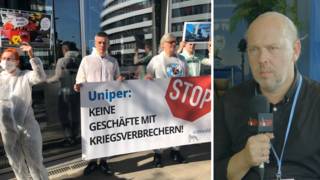