“On Our Side”: NLRB Sues Starbucks to Reinstate “Memphis 7” Workers Illegally Fired for Union Drive

In a major development, the National Labor Relations Board announced Tuesday night it is suing Starbucks to immediately rehire seven Memphis Starbucks workers who were illegally fired in retaliation for their union efforts. This comes as the NLRB issued a complaint against Starbucks for 29 unfair labor practice charges, including over 200 violations of federal workers’ protections, stemming from retaliation claims made by members of the Starbucks Workers United in Buffalo, New York, where Starbucks workers’ union organizing effort began in August. “Starbucks is willing to fight tooth and nail to protect the image that they have built over the years,” says one of the Memphis workers, Beto Sanchez. “They love to put up this facade of being a progressive company, of being woke, of being the first in leading areas. But like I’ve seen, they are willing to retaliate and fire workers for airing out their dirty laundry. They are just as bad as any other Fortune 500 company that’s out there.”

AMY GOODMAN: This is Democracy Now!, democracynow.org, The War and Peace Report. I’m Amy Goodman, with Juan González, as we look now at how workers who were fired during the wave of union organizing at Starbucks and Amazon are fighting to get their jobs back. We’ll begin with Starbucks.

The National Labor Relations Board has filed a rare lawsuit in federal court to immediately reinstate seven Memphis Starbucks workers who say they were illegally fired in retaliation for their union efforts. The group is known as the Memphis 7. They were fired after Starbucks claimed they violated company policy for speaking to reporters about their union drive. This comes as the NLRB, the National Labor Relations Board, issued a complaint against Starbucks for 29 unfair labor practice charges, including over 200 violations of federal workers’ protections, stemming from retaliation claims made by members of the Starbucks Workers United in Buffalo, New York, where Starbucks’ union organizing effort began in August.

For more, we go to Memphis, Tennessee, to speak with one of the Memphis 7. Beto Sanchez is a union organizer with Starbucks Workers United, one of the workers fired just weeks after they announced their plans to form a union at the Poplar and Highland store.

Beto, welcome to Democracy Now! The NLRB decision just came down yesterday to file this rare lawsuit. Explain its significance and explain what happened when you got fired. What were the reasons given?

BETO SANCHEZ: Oh, absolutely. It’s unfortunately something that’s not unfamiliar with other corporations. You know, they’re not going to fire an employee directly for unionizing, because they are aware of how illegal it is. Instead, they will try to enforce something that was never enforced for whatever reason. For instance, the reason they wanted to fire me was because I had a mask off while I was off duty, which doesn’t make any sense. And the same goes for the rest of the seven, as well as other workers across the U.S. that have also been retaliated against. And it’s something that’s not new between Starbucks and other corporations.

So, at this point, we’ve been happy to see that the NLRB is filing not only this in their lawsuit but in an injunction. And the significance of that is that Starbucks loves to stall on these very important hearings. And they were saying that, you know, between our affidavits and between what has been happening, what has been recorded on social media, that Starbucks has been doing that is anti-union and union-busting, the NLRB has been able to step in to tell Starbucks that, you know, we’re not able to stall this or do anything, because there’s been many times that Starbucks has been trying to stall time to kill our momentum or kill any direction that we’ve had. And so far, the NLRB has been on our side and helping us out with this. And I’m very happy to say that we are at about, as of today, 65 stores unionized across the U.S., as well as over 250 stores that are in the process of unionizing.

JUAN GONZÁLEZ: And, Beto, the NLRB’s ruling on Friday implicated Starbucks CEO Howard Schultz, alleging he violated the law last November by promising an increase in benefits to those employees if they didn’t unionize. Your response to Schultz’s — he has an image; he likes to cultivate an image as a progressive, liberal American corporate executive — how he has been responding and how the top management of Starbucks has been responding to these unionization efforts?

BETO SANCHEZ: Oh, absolutely. If there’s anything that I’ve learned throughout this entire ordeal, it’s that Starbucks is willing to fight tooth and nail to protect the image that they have built over the years. You know, they love to put up this facade of being a progressive company, of being woke, of being the first in leading areas. But like I’ve seen, they are willing to retaliate and fire workers for airing out their dirty laundry. You know, they are just as bad as any other Fortune 100 company that’s out there.

And there’s something that I’ve learned with something like the pandemic, is that it’s usually things like that that give it a good push, that kind of show the true colors of people like Howard Schultz. It’s moments like that where you are given an opportunity: whether should I worry about my profits, or should I worry about my workers? And at the end of the day, most of these CEOs are going to worry about their profits more than their workers. You know, they love to have called us essential workers, without giving us the essential pay, the essential dignity, the essential respect, the essential things we needed to work and generate the billions of dollars that Howard Schultz was able to have to live so comfortably in Manhattan. And as it was, you know, it’s been plain to show that Howard Schultz will be able to — you know, just like the rest of the upper management, they will retaliate very hard against people like me that are vocal about this and that are willing to fight against a company like this.

You know, they love — Starbucks is one of those companies that loves to market off of every possible cause they can find. I mean, I’m sure you’re aware about how as soon as pride comes, every single company puts on their cute little rainbow logo. But as soon as July rolls up, you know, it’s gone. You know, Starbucks loves to market and profit off of Black Lives Matter, Indigenous lives, trans lives, LGBTQ. But at the same time, they will be marketing Black Lives Matter propaganda and materials for the workers, but at the same time they will be firing Black workers in Memphis for unionizing. So, at this point, it goes to show what people like Howard Schultz care more about, and it is obviously their image.

AMY GOODMAN: Well, Beto Sanchez, we want to thank you for being with us. We will certainly follow what happens now that the rare lawsuit was filed by the NLRB last night in demanding you all be reinstated. Beto Sanchez is with the Starbucks Workers United, one of the workers known as the Memphis 7, fired by Starbucks. 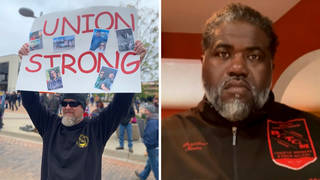