In a historic milestone, Chile has finalized a draft of its first-ever democratically written constitution to replace the one created under the U.S.-backed neoliberal dictator Augusto Pinochet. The new constitution is expected to enshrine a wide range of human rights and social programs, including free universal access to healthcare, higher education, reproductive rights, as well as more robust environmental safeguards and policies to promote gender and racial equity. It will also for the first time recognize Chile’s Indigenous peoples and offer restitution for historically Indigenous lands, but does not include a measure to nationalize parts of the country’s mining industry. “It has been a demand of social movements, of the civil society in Chile for decades,” says Pablo Abufom, member of Chile’s “Solidaridad” movement.

StorySep 04, 2020“Death Is on the Ballot”: Lessons for the US, 50 Years After Allende’s Socialist Revolution in Chile

AMY GOODMAN: This is Democracy Now! I’m Amy Goodman, with Nermeen Shaikh, as we turn to history in the making in Chile, where the draft of a new constitution was presented this week that could replace the one implemented during the dictatorship of General Augusto Pinochet. The president of Chile’s Constitutional Convention, María Elisa Quinteros, presented the draft of Chile’s new constitution during a ceremony Monday.

MARÍA ELISA QUINTEROS: [translated] It should be noted that the text we have built together emphasizes the autonomy of territories outside the center of Chile and has been the yearning of millions of Chileans. … This draft captures the spirit of a new Chile, a Chile that, on the foundation of decades of efforts, is taking a step into the future. These are the wishes of millions of citizens who placed their dreams and hopes in this process. This text materializes a new way of treating one another, a new way of understanding life in our country, where everyone can feel protected.

AMY GOODMAN: The new constitution would recognize for the first time Chile’s Indigenous peoples, codify reproductive rights, make higher education free, require gender equality in the government, and require it to mitigate and adapt to the climate catastrophe. Not included in the draft were plans to nationalize parts of the country’s mining industry. Work on the final version of the draft is underway. Chileans are set to vote on it September 4th. Some recent polls show fewer than 40% currently say they would vote yes.

For more, we go to Santiago, Chile, and we’re joined by Pablo Abufom, member of Chile’s Solidaridad movement — in English, Solidarity movement — an anti-capitalist, feminist organization.

Welcome back to Democracy Now!, Pablo. Talk about the significance of what took place this week.

Well, the first thing to say is that this finally ends with the neoliberal constitution imposed by the dictatorship. This is very important. It has been a demand of social movements, of the civil society in Chile for decades. And this is probably a new step in a political crisis that began in October 2019, where we had a huge popular revolt in Santiago, but in other big cities, in urban and rural centers in Chile, when we had millions of people taking to the streets to demand the guarantee of social rights; an end to neoliberal policies like privatization of education, healthcare and pension systems; and also gender equality and recognition of Indigenous peoples’ rights. And so, this new constitution, the draft of the new constitution, it’s finally a place where all those aspirations have a space, are recognized.

And this is also very relevant, because it’s the first constitution that is democratically written. It was an elected body that is actually representative of a Chilean diversity, including gender parity, representatives of Indigenous peoples, of social movements, like environmentalist groups and feminist movements. And so we have a body that is actually democratic. That is a huge contrast with previous constitutions that were written, in the case of the dictatorship, by a small group of partisan followers of the dictatorship, but also in the past that was written by a group of — small group of experts, politicians, lawyers, etc. And so, this is a completely historical milestone for our recent history.

NERMEEN SHAIKH: And, Pablo, could you talk about what you know of how much support the draft constitution has? We just mentioned that at the moment only 40% of people in Chile say that they would vote in favor of it.

PABLO ABUFOM: Yeah, we have to say that the same polls that say that are the polls that said that people were not approving the change of the constitution, or the people who said that the fascist — neofascist right-wing candidate, Kast, was going to win the election, and it was Gabriel Boric, a progressive, who won. So, there’s not too much to find in those polls but a lot of the aspirations of the great losers of this process, of this political crisis — the conservatives, nationalists and defenders of the neoliberal model.

So, the actual references that we have is, it’s not just the polls, but we have an 80% vote for a new constitution. We have a majority vote for representatives of social movements, of independents and leftist groups in the civil society to change a neoliberal constitution. And then we have a massive turnout to vote for Gabriel Boric as the president, as a progressive president, against the fascist right-wing candidate. So, those are the actual facts that we have. The rest are polls that, of course, tend to be — tend to talk more about the aspirations of the people who commission those polls than the actual opinion of the people.

NERMEEN SHAIKH: And, Pablo, what about this, the fact that one of the provisions was excluded, Article 27, which would have nationalized the mining industry? If you could talk about the significance of that and, in particular, lithium and the significance, the importance of lithium to the economy in Chile, and what that had to do with this decision?

PABLO ABUFOM: Well, Chile is an economy that is based on the extraction of raw materials. And mining is the main activity in terms of extraction of copper, and now lithium has become the new thing. And so, the dispute around who can — whether the state can have an economic activity in terms of extraction of lithium or just private companies, mostly multinational corporations that are currently mining a lot of the Chilean minerals right now, that’s one of the main disputes. And it mobilized a lot of support. And it was actually a popular initiative bill for the Constitutional Convention that was proposing the nationalization of the mines and other natural resources.

And I think that we have to take into account that a constitution is not going to solve all the problems. There are still a lot of things that are going to be part of future struggles, and the constitution opens a new political period for those struggles. So it definitely is not — the constitution is not enshrining nationalization, but nationalization of natural resources as a way to solve an economic crisis that is ongoing and to pay for the social rights that are being enshrined in the constitution, it’s definitely on the table, and it’s going to be a part of a political struggle in the next decades probably.

AMY GOODMAN: And what are the plans to galvanize support? I mean, this is going to be a referendum all over the country in September for this constitution. And how much do you expect it will change?

PABLO ABUFOM: Well, the thing is that since the beginning of the Constitutional Convention, the right wing and the great losers of that election have been doing a dirty campaign of fake news and promoting rejection of the new constitution, even before it was written or even before we could see any of the articles. So, they have a lot of advantage in that sense. They’ve been doing it for a long time. And now popular social movements and civil society is mobilizing for an approval of the new constitution, and now we are seeing that, with the draft in our hands, we’re going to go to the streets to talk to people and communicate the actual changes. I think that those polls reflect the control that the mainstream media have on the political narrative in Chile. We’ve seen that they have been talking — most of the information that is on social media —

PABLO ABUFOM: — and mainstream media is fake news. And now we’re going to see what people think about the actual constitution, the enshrining of social rights, of reproductive rights, of gender parity, of a democratic process, etc.

AMY GOODMAN: Well, we have to leave it there. We thank you so much, Pablo Abufom — 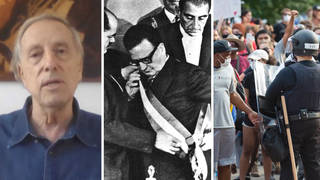