We get an update on Azerbaijan’s month-long blockade of the disputed area of Nagorno-Karabakh, home to ethnic Armenians in the South Caucasus. Russia, which brokered a ceasefire between the two countries in 2020 following six weeks of intense fighting, says it’s ready to send troops to the Armenia-Azerbaijan border, but with the Russian military bogged down in a costly war in Ukraine, the country’s capacity to enforce a settlement may have changed. We speak with journalist Roubina Margossian, managing editor of the independent news site EVN Report in Armenia, who reported from Nagorno-Karabakh during the 2020 war.

AMY GOODMAN: This is Democracy Now!, democracynow.org, The War and Peace Report. I’m Amy Goodman, with Nermeen Shaikh, as we turn now to look at the growing crisis in Nagorno-Karabakh, a region at the center of a decades-long dispute between Azerbaijan and Armenia in the South Caucasus. The area is located inside Azerbaijan but is historically Armenian territory populated mostly by ethnic Armenians. Since December 12th, the only road linking Nagorno-Karabakh to Armenia has been closed, effectively putting the population under a weeks-long blockade. According to news accounts, Azerbaijan has at times cut off electricity, gas and internet access to the region. Armenia’s prime minister has denounced the blockade.

PRIME MINISTER NIKOL PASHINYAN: [translated] The closure of the Lachin corridor is a provocation. Its goal is a new military escalation. And there is no need to take steps that are desirable to those drafting the military escalation scenario. The aim of this provocation and escalation is to hide the obvious need for a political and official dialogue between Baku and Stepanakert and to remove this issue from the agenda.

AMY GOODMAN: On Wednesday, the Russian Foreign Minister Sergey Lavrov said Russia is ready to send troops to the Armenia-Azerbaijan border. In 2020, Russia brokered a ceasefire between the two nations.

To talk more about the crisis, we’re joined by the writer and photojournalist Roubina Margossian. She’s the managing editor of the independent news site EVN Report in Armenia. She reported from Nagorno-Karabakh during the 2020 war. She’s joining us from Yerevan, Armenia’s capital.

Roubina, thanks so much for being with us. Can you lay out the latest developments and why this is so significant for the world to understand what’s happening?

Well, the latest developments, to start there, it’s like almost 40 days, 38 days now, that people, 120,000 people, in Artsakh, Nagorno-Karabakh, are in a blockade. This means there’s — as you mentioned also, there’s no — the gas has been cut off. The internet has been cut off on occasions. Electricity is like — there’s like electricity cuts every day now, because they’re trying to save electricity. There is no medicine. There is not enough food. Today, the recent development is that also a number of institutions, people are starting to work from home, because there isn’t enough heating, and they’re trying to save on that, as well. Children are not going to school.

So, it’s a humanitarian crisis that’s on the verge of becoming a man-made catastrophe. And this is what’s happening, because the population of Nagorno-Karabakh is blockaded, and it’s already been about 40 days, 38 days. And there is almost no solution in sight.

NERMEEN SHAIKH: There was a peace agreement that was brokered by Russia in 2020. Why was this violated now? How do you understand why this happened?

ROUBINA MARGOSSIAN: Well, the 2020 November 9th statement, which was a ceasefire agreement that was brokered by Russia, basically puts the Lachin corridor, which is the only lifeline that Artsakh has, its connection with Armenia — puts the Lachin corridor under the authority of the Russia peacekeeping contingent that’s been deployed there. So, here again, we have this issue as to the peacekeepers are there, and there haven’t — they’re allowing this to happen at this point.

Why is this happening? Well, we can go into a little bit of what’s happening also with Russia in the region and in Ukraine. While Russia is losing a lot of its influence in the region and with Armenia’s more tendency pivot towards the West, Russia is not opposed to allowing Azerbaijan use a hybrid warfare strategy such as this one, which is blockading the only corridor that’s a lifeline to, quite basically, eventually pressure Armenia into an actual peace deal, into concessions, into what the Azerbaijani president calls the Zangezur corridor, into receiving it. And basically, also, the added benefit would be the self — presumed self-ethnic cleansing of the Armenians of Nagorno-Karabakh, because this is not the first incident. This has kind of, like, been dripping all the time. The gas is not being cut for the first time. There are issues with — issues are persistent, every once in a while. So, it’s this hybrid warfare tactic that’s also kind of meant to collectively punish, I think, the population of Artsakh, and Russia is allowing it, because it also — it’s also kind of a punishment and pressure on Armenia to — for its pivot towards the West.

NERMEEN SHAIKH: Could you explain just some background, Roubina? This crisis has been ongoing for almost 30 years, this disputed territory. Explain how borders — once the Soviet Union was dissolved, how were borders determined? Because if one looks at the map, Azerbaijan comes on either side of Armenia, and then we have Nagorno-Karabakh, as the Armenians call and as you’ve been referring to it as Artsakh. So, explain how this happened and what the effects of this have been in the region.

ROUBINA MARGOSSIAN: Well, the effects of this in the region have been very considerable. Let me just — a conflict such as the Nagorno-Karabakh conflict is something that can be manipulated and escalated and can basically become a full-fledged conflict any moment. This gives powers like Russia a lot of leverage over countries in the region, especially Armenia, in this case also Azerbaijan.

So, it’s been a frozen conflict for 30 years, but it goes way back. Artsakh has been traditionally, ethnically, historically Armenian. It was — as was the Soviet policy at the time, it was just given to the Republic of Azerbaijan, the Soviet Republic of Azerbaijan back then. It was an autonomous oblast. This is very important to mention. It was not a full part of Azerbaijan, an autonomous part of Azerbaijan. However, as the Soviet Constitution back then allowed people to vote and decide which republic they wanted to join within the union, so, actually, almost at the end of the Soviet Union, the population of Artsakh, Nagorno-Karabakh, took a vote, decided to join Armenia. So, however, Soviet Union didn’t accept the votes, and the conflict has been ongoing ever since. So, their right to self-determination under the Soviet rule was not respected, and then, of course, with the fall of the Soviet Union, it grew into a conflict.

And it’s very important to note that this is a heavily — has always been — at some point it’s been a 100% Armenian-populated area. During the Soviet times, it was majority Armenian-populated area. So, historically, there is no contesting if this land is ethnically Armenian or not, or if this 120,000 people are under native lands or not. But that’s the brief history of the conflict, which escalated into a full-fledged war in 2020 when Azerbaijan attacked. And so we’re dealing with a hybrid warfare situation.

AMY GOODMAN: So, can you talk about the significance of the Russian Foreign Minister Sergey Lavrov saying Russia is ready to send in troops to the Armenia-Azerbaijan border, and what you feel would lead to some kind of resolution to the standoff right now?

ROUBINA MARGOSSIAN: Well, even if CSTO — this was said in the context of the Collective Security Treaty Organization, of which Armenia is a member — even sends troops, which they could have done on so many occasions and failed to do, which was their, basically — they had to do it, and they kind of told a little bit of the Azerbaijani narrative there, as it played a little bit of bothsidesism, even though Armenia was their security partner as a member of the Collective Security Treaty Organization, which says any incursion into the sovereign territory of one nation is considered an incursion into the territory of the whole Collective Security Treaty Organization. That would be, in this case, between — on the border between Armenia and Azerbaijan, and it would not — the CSTO, as an organization, has no responsibilities or nothing to do with Nagorno-Karabakh or the Lachin corridor, because that is not part of the recognized territory of the republic — sovereign Republic of Armenia nor Azerbaijan at this point, either — as well, to be [inaudible].

NERMEEN SHAIKH: Roubina, you mentioned, of course, the CSTO, the Collective Security Treaty Organization, which consists of six states that became members following the dissolution of the Soviet Union. Of course, Azerbaijan is not a member. Could you talk about whether both sides view Russia as a neutral broker, given its historic support and alliance with Armenia?

ROUBINA MARGOSSIAN: Sorry. Could you repeat the last part? I lost audio.

NERMEEN SHAIKH: Is Russia considered a neutral broker, given its historic alliance with Armenia?

ROUBINA MARGOSSIAN: Well, evidently, no, as recent developments in Armenia and around Nagorno-Karabakh show that Russia is — Russia has historically brokered the first Nagorno-Karabakh ceasefire, second Nagorno — the ceasefire. But, however, as far as conflict resolution goes, Russia has proven to be more after self-interest rather than peace in the region.

AMY GOODMAN: Well, we want to thank you so much, Roubina Margossian, for joining us, writer and a photojournalist, managing editor of the independent news site EVN Report in Armenia. We’ll link to it at democracynow.org. She has reported from Nagorno-Karabakh during the 2020 war, joining us from Yerevan, Armenia’s capital.

Next up, meet the Earth scientist who was fired from her job at a federal lab for her climate activism. Stay with us.

NEXT“Out of the Lab and Into the Streets”: Meet Earth Scientist Fired After Engaging in Climate Protests 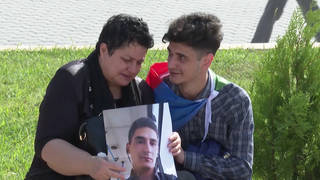