We turn now to the issue of conflict diamonds — also known as blood diamonds. The documentary “Diamond Life” looks at how diamonds funded the civil war in Sierra Leone. [includes rush transcript]

AMY GOODMAN: We turn now to the issue of conflict diamonds, also known as blood diamonds. Last week, two men were arrested in Arizona for smuggling and attempting to sell more than 11,000 carats of rough diamonds. Federal officials believe these diamonds were in violation of the Kimberley Process, an international government certification process set up to stop the trade in diamonds that fund conflict in Africa. Watchdog groups have pointed to these arrests as proof it’s still relatively easy to smuggle diamonds and that the Kimberley Process is not strong enough.

In a minute, we’ll talk with Corinna Gilfillan of Global Witness, but first we’re going to go to a documentary called Diamond Life. It was produced by Stephen Marshall and Josh Shore of Guerrilla News Network. It was made a few years ago. It was made in 2000. And it’s about how diamonds funded the civil war in Sierra Leone.

UNIDENTIFIED 1: From 1991 to 1999, Sierra Leone was in a state of civil war. During that time, 50 percent of the 4.5 million people of Sierra Leone were forced out of their homes. And thousands of people have been killed. Millions more have experienced atrocities you do not want to even think about.

UNIDENTIFIED 2: The people of Sierra Leone insisted that they wanted a democratic government. They no longer wanted a military power. The military resisted.

UNIDENTIFIED 3: Well, there were fights for power going on in Africa, and the opposition movements always call themselves “revolutionary forces” in one way or another.

UNIDENTIFIED 4: The RUF is not a revolutionary movement. The RUF seeks political power.

FODAY SANKOH: And, above all, we’ll fight to the last man.

UNIDENTIFIED 5: What’s the war about? The rebels want to force themselves into power.

NARRATOR: The diamond mines of Sierra Leone are the initial targets of rebel attacks.

UNIDENTIFIED 5: The rebels are angry at civilians for voting in the civilian government.

UNIDENTIFIED 2: Soldiers will cut the people, say, “Oh, you voted,” look at the finger, and if they see that indelible ink on the finger, they chop off your finger.

UNIDENTIFIED 2: And this is how this business of amputations started.

UNIDENTIFIED 1: In Sierra Leone, it’s quite clear that the tactics of the RUF were to target civilian population in order to spread terror.

UNIDENTIFIED 5: It was like we’re experiencing hell on Earth. The rebels, they started attacking innocent people.

UNIDENTIFIED 6: People were hacked to death, houses set on fire. Anybody who tried to get out of the house were gunned down. People lined up at random and shot.

UNIDENTIFIED 5: The bulk of them were young boys between the ages of eight and 16. Some were carrying AK-47. Some were carrying Russian assault rifles and rocket-propelled grenade launchers. I heard a loud blast. One weapon fired a rocket-propelled grenade in one of the flats around. I noticed the scattered remains of some eight people. I saw two children whose heads were separated from the rest of their body and a good number of people with their remains scattered all over. The war was upside down, the worst in Sierra Leone at that time.

UNIDENTIFIED 1: There are utterly shameless individuals and organizations out there who would buy conflict diamonds, even though they know that those diamonds are helping to sustain a war, even a war as brutal as the one in Sierra Leone.

UNIDENTIFIED 3: The De Beers Company has been caught up in a big controversy. They claim not to be buying diamonds and gems from conflict zones like Sierra Leone. They have developed codes of conduct and other ethical standards, because they have been criticized severely by NGO groups that have monitored their practices.

NARRATOR: In 1998, Global Witness, a U.K.-based NGO, embarrassed De Beers in a report proving they had bought gems from Angolan rebels.

UNIDENTIFIED 1: At some point in the chain, those diamonds do get down to consumers who, when they buy themselves an engagement ring, want to know that that jewel has not blighted somebody else’s life.

NARRATOR: In July 2000, World Diamond Congress issued a worldwide ban on the trade of conflict diamonds.

UNIDENTIFIED 5: I would appeal to you to find out where the diamond you buy is coming from.

AMY GOODMAN: And excerpt of Diamond Life, the documentary produced by Stephen Marshall and Josh Shore of Guerrilla News Network.

Child Labor: The Hidden Ingredient to the Billion-Dollar Chocolate Industry?

NEXTChild Labor: The Hidden Ingredient to the Billion-Dollar Chocolate Industry? 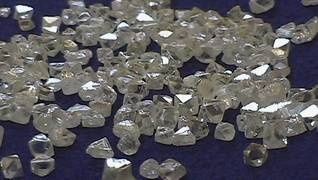