In Historic March, Tens of Thousands Gather from Across Nation to Demand Justice for Jena Six

Tens of thousands of protesters gathered Thursday in the town of Jena, Louisiana, to demand justice for the Jena Six — the six African-American teenagers facing a total of over 100 years in prison for allegedly beating a white student in a schoolyard fight. The fight occurred after white students hung nooses from a tree at the school. Thursday’s protest was one of the largest civil rights rallies in the South since the 1960s. [includes rush transcript]

AMY GOODMAN: Tens of thousands of protesters gathered Thursday in the town of Jena, Louisiana, to demand justice for the Jena Six, the six African-American teenagers who face a total of over a hundred years in prison for allegedly beating a white student in a schoolyard fight. The fight occurred after white students hung nooses from a tree at the school.

Thursday’s protest was one of the largest civil rights rallies in the South since the ’60s. According to the Associated Press, the state police estimated as many as 60,000 people took part in a series of rallies and marches in Jena, a town of just 3,000 residents. The Reverend Al Sharpton declared Jena to be the beginning of the 21st century civil rights movement.

The protest was scheduled to coincide with the sentencing of Mychal Bell, who was convicted by an all-white jury of aggravated assault. But last week, Bell’s conviction was thrown out because he was inappropriately tried as an adult, according to a Louisiana appeals court. Bell remains in jail, where he has been held since December, but a bond hearing has been scheduled for 10:00 this morning.

Today, we’ll be speaking with parents of the Jena Six, as well as the Reverend Al Sharpton. But first, we go to a piece produced by Rick Rowley and Jacquie Soohen of Big Noise Films — it’s narrated by Rick Rowley — of yesterday’s march.

RICK ROWLEY: At 4:30 a.m., the buses began arriving from across the country, and they poured in all morning long. The tiny town of Jena, Louisiana, population 3,000, braced itself for the largest civil rights march it had ever seen. Downtown businesses closed, and the local paper warned of outsiders coming in and causing trouble. But black residents welcomed the demonstrators.

JENA RESIDENT: Well, I welcome them all. Yeah, it’s a good thing. I mean, it hasn’t happened in this area since back in the '60s, you know, the protesting and marching. But it's good for the nation to see that we can still come together in the South and protest against the injustice.

RICK ROWLEY: Jena became a nationwide symbol for racism in the criminal justice system when six black students faced life sentences on attempted murder charges after a schoolyard fight that injured a white student. Outcry around the case grew when it was revealed that the fight occurred in the context of rising racial tensions at the school, where nooses were found hanging from a tree in the schoolyard after black students attempted to sit in the traditionally all-white area. When the first defendant was found guilty of second-degree battery and conspiracy by an all-white jury, Thursday’s protest was planned to coincide with his sentencing hearing. The case has become a symbol of racial bias in criminal justice system around the country.

We understand that, you know, no town would like 50,000 people to walk in one morning, but unfortunately, though, this is part of America, and since it’s part of America, we have a right to come anywhere that we want to. And we have a right to speak against injustice anywhere, and that’s why we’re here. So we’re sorry, but the DA should have known that when he overcharged those kids and put them through what they’ve been through. Mychal Bell has been in jail since January or December. He should have known that, and now he does. Justice for the Jena Six, justice for kids everywhere.

RICK ROWLEY: An estimated 40,000 to 60,000 protesters marched in Jena on Thursday, demanding that all charges be dropped against the Jena Six. They rallied in front of the courthouse, where the cases are being tried, and marched to Jena High School and the spot where the now-famous tree once stood.

RICK ROWLEY: The school had cut the tree down, removed the stump and smoothed the ground over, but demonstrators marked the spot where it once stood. This place, which was a symbol of racism nationwide, brought together what many hope will be a new movement for racial justice in America.

PROTESTER: We’ve got six young African-American students who are going to end up statistics and not even be able to have the opportunity to pursue an education or career at this point. We’re talking about one to two life sentences, which is unheard of for a schoolyard brawl. So it’s definitely some injustice, and we want to definitely show support and show that educated young men and women won’t stand for social injustice in this era. The civil rights era is not dead. It’s just a whole other movement that’s about to happen. We have brothers and sisters from everywhere, so it’s a beautiful thing to see beautiful bright faces, all different races, creeds, nationalities. It’s beautiful. It’s beautiful This is what it should be on a daily basis: a revolution. Definitely a revolution.

AMY GOODMAN: And that piece, produced by Rick Rowley and Jacquie Soohen of Big Noise Films. 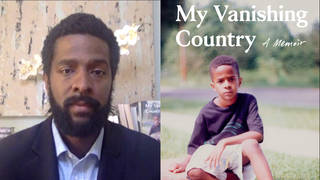