Amy Goodman Among 4 Recipients of 2008 Right Livelihood Award, Known as the “Alternative Nobel”

Democracy Now! host Amy Goodman has become the first journalist to receive the Right Livelihood Award, established to honor those “offering practical and exemplary answers to the most urgent challenges facing us today.” The annual prize, also known as the Alternative Nobel, will be awarded in the Swedish parliament in December. The other winners were Indian activists Krishnammal and Sankaralingam Jagannathan, women’s rights advocate Asha Hagi of Somalia, and sexual violence victims’ advocate Monika Hauser of Germany. [includes rush transcript]

JUAN GONZALEZ: Amy, before we get going, I want to congratulate you on being the first journalist in the world to receive the Right Livelihood Award. It’s the award given out for individuals who provide exemplary social transformation, and you’re going to be receiving it in the Swedish parliament in December.


And I also want to congratulate the other three recipients. There’s the couple from India, Krishnammal and Sankaralingam Jagannathan, and their organization LAFTI, the Land for the Tillers’ Freedom, in India. They received the award, according to the Right Livelihood Committee, “for two long lifetimes of work dedicated to realizing in practice the Gandhian vision of social justice and sustainable human development, for which they have been referred to as ‘India’s soul.’”

Also, the award went to Asha Hagi of Somalia. She received the award “for continuing to lead at great personal risk the female participation in the peace and reconciliation process in her war-ravaged country.”


And finally, Monika Hauser of Germany — the Right Livelihood Committee said the award went to her “for her tireless commitment to working with women who have experienced the most horrific sexualized violence in some of the most dangerous countries in the world, and campaigning for them to receive social recognition and compensation.”


So, I look forward to meeting all of them in Sweden at the Swedish parliament in December, and maybe we’ll even do a broadcast of Democracy Now! from there.


JUAN GONZALEZ: It should be a great event. And, of course, you’re honored for developing an innovative model of truly independent political journalism that brings to millions of people the alternative voices that are often excluded by the mainstream media.


AMY GOODMAN: Yeah, we engage here in trickle-up journalism, and we deeply believe in going to where the silence is. 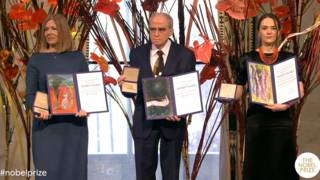