After 2 Years Behind Bars, Jailed U.S. Hikers Freed in Iran

The U.S. hikers Shane Bauer and Josh Fattal have been released in Iran after two years in prison on charges of espionage. Bauer and Fattal were granted bail earlier today and handed over to Swiss diplomats. The pair were arrested in 2009, along with Sarah Shourd, while hiking near the Iran-Iraq border. We get reaction from Esther Kaplan of the Nation Institute, a colleague of the hikers who last year published an extensive investigation reporting that they were arrested on the Iraqi side of the Iran-Iraq border—not in Iran as the Iranian government has claimed.

ESTHER KAPLAN: Back in 2009, I was working with Shane Bauer on a number of stories out of the Middle East that he was reporting, from Iraq and the West Bank, and I still remember vividly the news of his arrest, along with his partner, Sarah Shourd, and his friend, Josh Fattal. And it’s been more than two years now that the two men have been in prison. Sarah was released a year ago on a compassionate basis. And it’s just been an incredible roller coaster of missed opportunities and efforts to get them out, led really heroically by the families of the three of them, who have really kept this fight alive, and aided by the many journalists that are part of the community that Shane Bauer had worked with. It’s unbelievable that they’re finally being released. It’s fantastic. It’s thrilling news. We just can’t wait to see them alive and in the flesh.

I think it’s very—the crucial thing here is, while we’re all incredibly grateful for the clemency that was exercised by the Iranian courts and president, that the original charges were completely ludicrous. The idea that these three people—one journalist, two human rights activists and educators—were spies for the U.S. government, all very critical of the U.S. government in their work and in their writings, was patently false from the start. And based on our investigations, it also seemed less and less clear that they actually had crossed the border from Iraq, where they were hiking, into Iran. It seems that the scenario was that Iranian—armed Iranian guards insisted that they approach them, and only at that point had they crossed the border and became the subject of arrest. So, these are two men who have served more than two years in a notorious prison for crimes they simply never committed. And this is a really incredible day of justice for them and for all of us who have been following their cases. 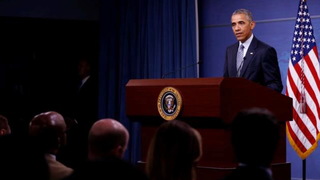