The Supreme Court opens its 2012-2013 term today with a landmark case to decide whether survivors of human rights violations in foreign countries can bring lawsuits against corporations in U.S. courts. The case centers on a lawsuit that accuses the oil giant Shell’s parent company, Royal Dutch Petroleum, of complicity in the murder and torture of Nigerian activists. Some legal analysts are comparing this case, Kiobel v. Royal Dutch Petroleum, to the landmark campaign finance ruling in Citizens United. In 2010, the Supreme Court ruled corporations have broad rights under the First Amendment and can directly fund political campaigns. The court is now being asked to decide if corporations have the same responsibilities as individuals for violations of international law. The court’s ruling will also impact numerous other human rights cases being heard by lower courts. We’re joined in New York by Baher Azmy, the legal director of the Center for Constitutional Rights. [includes rush transcript]

StoryFeb 24, 2012Supreme Court to Decide Whether U.S. Corporations Can Be Sued for Abuses Overseas

AMY GOODMAN: We’re in Richmond, Virginia. We continue our coverage of the
Supreme Court by turning to a case that will decide whether survivors of human rights violations in foreign countries can bring lawsuits against corporations in U.S. courts. The case centers on a lawsuit that accuses the oil giant Shell’s parent company, Royal Dutch Petroleum, of complicity in the murder and torture of Nigerian activists. In 1995, nine Nigerian activists, including Ken Saro-Wiwa, were executed by the Nigerian military government for protesting Shell’s exploration and development in the Niger Delta. The families of seven of the Nigerians killed are seeking to hold Shell liable under a 1789 U.S. law called the Alien Tort Statute. A separate suit involving Ken Saro-Wiwa’s family was settled in 2009, when Shell agreed to pay $15.5 million.

Some legal analysts are comparing this case, Kiobel v. Royal Dutch Petroleum, to the landmark campaign finance ruling in Citizens United. In 2010, the Supreme Court ruled corporations have broad rights under First Amendment and can directly fund political campaigns. The court is now being asked to decide if corporations have the same responsibilities as individuals for violations of international law. The court’s ruling will also impact numerous other human rights cases being heard by lower courts.

To find out more about the implications of this, we’re joined in New York by Baher Azmy, the legal director of the Center for Constitutional Rights.

Welcome to Democracy Now! First, explain exactly what this case is. What happened in 19—in the early 1990s in Nigeria?

AMY GOODMAN: I wanted to ask you what the law is that this is based on.

BAHER AZMY: This—so, this lawsuit is based on a statute called the Alien Tort Statute, which was passed by the very first Congress of the United States in 1789, which permits non-citizens to sue in U.S. courts for serious international law violations. And the statute actually remained dormant for nearly 200 years, until the Center for—lawyers of the Center for Constitutional Rights, in the mid-’70s, unearthed it while researching possible responses to the My Lai massacre.

And in the mid-'70s, in particular, a woman named Dolly Filártiga tracked down the police chief who had brutally tortured and killed her beloved 17-year-old brother Joelito while he was in Paraguay, simply because Joelito was the son of General Stroessner's, the dictator’s, political opponent. And so, on her behalf, the Center for Constitutional Rights sued this police chief in U.S. court in the United States, and that produced a ruling in the Court of Appeals here in New York called Filártiga, which enshrined the Alien Tort Statute in U.S. law and made clear, until the Kiobel decision of the Supreme Court, that foreigners could sue in U.S. courts for the most egregious human rights violations.

AMY GOODMAN: I want to turn for a moment to Ken Saro-Wiwa. In 2009, Shell reached this out-of-court settlement with the family of the executed Nigerian writer and environmentalist for $15-and-half million. The landmark trial investigated Shell’s alleged involvement in human rights violations in the Niger Delta, including its complicity in Saro-Wiwa’s torture and execution. He was the founding member and president of MOSOP, the Movement for the Survival of the Ogoni People, a group committed to using nonviolence to stop the repression and exploitation of the Ogoni and their land by Shell and the Nigerian government.

KEN SARO-WIWA: The indigenous people have been cheated through laws such as are operated in Nigeria today. Through political marginalization, they have driven certain people to death. In recovering the money that has been stolen from us, I do not want any blood spilled, not of an Ogoni man, not of any strangers amongst us. We are going to demand our rights peacefully, nonviolently, and we shall win.

AMY GOODMAN: During Ken Saro-Wiwa’s final visit to the United States, he came on our show on WBAI, the Pacifica Radio station in New York, to Wake-Up Call. This was just before Ken returned to Nigeria, was arrested, tried and then executed. This is what Ken Saro-Wiwa told us.

KEN SARO-WIWA: Shell does not want to negotiate with the Ogoni people. Each time they’ve come under pressure from local people, their want has always been to run to the Nigerian government and to say to the Nigerian government, “Oil is 90 percent of your foreign exchange earning. If anything happens to oil, your economy will be destroyed. Therefore, you must go and deal with these people, these troublemakers.” And most times, the government will oblige them and visit local communities of poor, dispossessed people with a lot of violence.

And when these communities then protested and said, “Look. Look at the amount of violence that is being used against us, even though we are only protesting peacefully,” then the oil companies will come and say, “Well, there is no way we can determine how much violence a government decides to use against its own people.” So, basically, the local communities have no leverage with the oil companies at all.

AMY GOODMAN: That was Ken Saro-Wiwa in 1995. On November 10th, he was executed by the Nigerian regime. He was speaking on WBAI in New York with me and WBAI’s Bernard White. Finally, Baher Azmy, why the court hearing this case again? Isn’t this highly unusual?

BAHER AZMY: It is, and it has a sort of ominous precedent. So, the court is asking two questions in this case: first, whether or not corporations, simply because of their corporate form, are somehow exempt from otherwise binding international human rights obligations; and also, they’re asking an equally broad question, whether or not this statute could apply to human rights violations that occur outside the United States, as in in Nigeria. And the ominous precedent, of course, is Citizens United itself, where the court reset certain questions and expanded the scope of corporate power more than had been initially contemplated. And so, you have this remarkable irony, that you already pointed out, which is that the court in Citizens United made—suggested that corporations have First Amendment rights, but here, the court may carve out an exemption from responsibilities from corporate personhood. And that is a sort of shocking development. And that could only happen in a court that seems, as it is, so obsessed with corporate power.

AMY GOODMAN: Baher Azmy, I want to thank you very much for being with us, legal director of the Center for Constitutional Rights. We will follow this case closely. You can also go to our website at democracynow.org to see the documentary we did in Nigeria after Ken Saro-Wiwa was executed. I produced it with Democracy Now! then-producer Jeremy Scahill. It’s called Drilling and Killing: Chevron and Nigeria’s Oil Dictatorship, about another oil company, a few years Ken Saro-Wiwa and the eight other minority rights activists were killed. 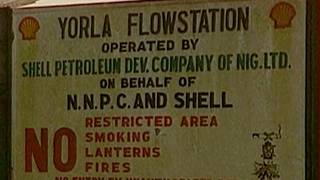 Supreme Court to Decide Whether U.S. Corporations Can Be Sued for Abuses Overseas