We speak with Florida Democratic State Representative Mia Jones, who fought the passage of Florida’s so-called “Stand Your Ground” law that authorities say has prevented them from arresting Trayvon Martin’s shooter, George Zimmerman, who is claiming he acted in self-defense. Jones is chair of the Florida Legislative Black Caucus, who sent letters to Attorney General Eric Holder and Florida Gov. Rick Scott calling for impartial investigations into the shooting death of unarmed 17-year-old Martin last month. She says the caucus’s 24 members will work to re-evaluate the gun law. [includes rush transcript]

AMY GOODMAN: The Justice Department’s statement that it’s prepared to step in with an independent investigation goes to some length to explain the burden prosecutors will face, noting that, quote, “With all federal civil rights crimes, the government must prove beyond a reasonable doubt that a person acted intentionally and with the specific intent to do something which the law forbids — the highest level of intent in criminal law. Negligence, recklessness, mistakes and accidents are not prosecutable under the federal criminal civil rights laws.”

We’re going to go right now to State Representative Mia Jones of Jacksonville, who is the chair of the Florida Legislative Black Caucus, joining us on the phone.

The FBI has now said, because of tremendous public outcry, that they’re going to step in. Your response?

REP. MIA JONES: As a caucus, we are very pleased that they have chosen to step in. We had also called for our governor to come forward and to get involved and engaged in this process with the FDLE, as well. And so, to wake up this morning and to hear that they are all becoming a part of what’s happening and to—hopefully, that we will get an impartial investigation underway and that Mr. Zimmerman will be brought up on charges and that the court system would be able to prevail in this matter.

AMY GOODMAN: Can you talk about what’s happening right now in the Florida legislature around Trayvon’s death?

REP. MIA JONES: Actually, the legislature is out of session, and so we are not actively discussing what’s going on. But as a caucus, we have a number of members who have been impacted through their various constituencies, both down in South Florida, where Trayvon’s mother is, I understand, and up in the Sanford area, where his father is. And we have 24 members across the state, and we have a commitment to this family that we will stand with them. The legislative process is such that since we are out of session, there’s not a whole lot of law changing that can be done, but we know that the laws that are currently on the books in Florida make it difficult for prosecution to go forward. But we believe that this is a clear-cut case, as the attorney has stated. Listening to the tapes, listening to the various witnesses, it’s clear that he was not threatened, he was pursuing, and that this was simply a cold-blooded killing.

AMY GOODMAN: Can you explain the “Stand Your Ground” law that is so controversial that is being used as the defense for why Zimmerman has not been arrested?

REP. MIA JONES: Basically that law allows you to use, basically, deadly force if you feel that you’re being threatened and in fear of your life. And so, Mr. Zimmerman has claimed self-defense and indicated that that was why he acted the way that he did. And Florida law, being what it is, which I didn’t support when we passed it, and I think it’s something that needs to be changed. You should not have to wonder, if you’re walking down the street, whether or not someone will feel that they are being threatened simply as you take steps to go wherever you’re trying to get to. And so, as a legislative body, the caucus will address—look to address this issue when we go back into session next year. But for now, we just want to make sure that all parties involved, whether it’s the sheriff’s office in Sanford or whether it’s the FDLE or whether it’s the Justice Department, but that everyone looks at what role they were supposed to take and that they are held accountable for doing what they are charged with doing.

AMY GOODMAN: We’re going to talk more about this law, what some call the “shoot first” law, not only in Florida but in other states, in a moment, but I wanted to go to Shelton Marshall before he has to leave. 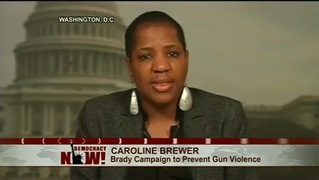