We speak with Caroline Brewer of the Brady Campaign to Prevent Gun Violence about how the killing of Trayvon Martin has brought renewed scrutiny to Florida’s controversial “Stand Your Ground” law, also referred to by critics as the “shoot first” law. Backed by the National Rifle Association, the law expands the right of citizens to claim self-defense in the killing of others. More than 20 states have similar measures in place. Brewer says the law allowed Floridians with criminal backgrounds, including many who plead guilty to assault, burglaries and child molestation, to obtain concealed carry licenses. “You’re talking about people who are dangerous, people who are violent. And yet, just within a very short time after the law was passed, Florida had hundreds and hundreds of these people with these licenses to go out and kill somebody else,” Brewer says. “And pretty much it was their word against the other person’s.” [includes rush transcript]

AMY GOODMAN: “Strange Fruit,” sung by Billie Holiday, written by Abe Meeropol, the adopted father of Michael and Robby Meeropol, who were the sons of the Rosenbergs, Ethel and Julius Rosenberg. For our radio listeners, during that song, we showed the images of Trayvon Martin, Oscar Grant, Ramarley Graham and Amadou Diallo. And you can go to our website to see that music interlude. This is Democracy Now!, democracynow.org, The War and Peace Report. I’m Amy Goodman.

The killing of Trayvon Martin has brought renewed scrutiny to Florida’s controversial “Stand Your Ground” law. Backed by the National Rifle Association, the law expands the right of citizens to claim in self-defense in the killing of others. More than 20 states have similar measures in place. Now Oklahoma is poised to become the first state in seven years to let residents openly display handguns in public.

I want to go to Caroline Brewer. Talk about this law. What exactly does it mean?

CAROLINE BREWER: What the law means is that people who have been licensed to carry concealed weapons can carry those weapons outside of their home in places where they, under the law, have a right to be, and they can use those weapons if they feel that their lives are being threatened or that they have witnessed someone who is about to commit a felony or who is in the commission of a felony.

REV. GLENN DAMES: Everybody was involved. Most of the people in the community was always up in rage about this particular law, because we seen it as what some have dubbed it, “the John Wayne law,” which means that you can carry your gun and kill anybody at will, and that the burden of proof then no longer lies with you to prove that you felt threatened. This is absolutely ridiculous, and we’re calling upon Governor Scott now to repeal this law, on legislators. You heard earlier Representative Mia Jones say that the Black Caucus, the State Black Caucus, black legislators was going to work hard to repeal this law. I think that to be the number one goal. And I think that we should call it Trayvon’s reversal, because this is a heinous law that should not be on the books, because, as you can see, you have people use it the wrong way, and it hurts and kills families, destroys them. And at a time when we should be focusing on the family, we don’t need people who destroy families with this law.

AMY GOODMAN: Caroline Brewer, talk about the NRA’s involvement with it and the legislation that some call the “shoot first” legislation, others call it “Stand Your Ground,” that is spreading now, and the—what exactly is happening in Oklahoma, first state where you can carry—you don’t have to conceal your gun.

CAROLINE BREWER: Well, the NRA, back in 1987, was successful in getting Florida to pass the first concealed weapons law. So Florida has been the NRA’s utopia for testing terrible gun laws that loosen regulations about who can carry guns and where they can carry guns and how they can use those guns. So this has been going on for quite some time, where the NRA has been able to go to Florida and get the legislators to pass laws that liberalize who can carry guns. And what we’ve seen on a practical level in Florida is that just a year after the “shoot first” law was enacted, you had an exposé by the Sun Sentinel that found hundreds and hundreds of people who had these concealed carry licenses were people who had criminal backgrounds. They had arrests and had pleaded guilty to assaults, burglaries, child molestation. So you’re talking about people who are dangerous, people who are violent. And yet, just within a very short time after the law was passed, Florida had hundreds and hundreds of these people with these licenses to go out and kill somebody else. And pretty much it was their word against the other person’s.

And, you know, in the case of Trayvon, he is not alive, but there certainly are other witnesses, and there certainly are many circumstances to indicate that George Zimmerman did go after this young man, that he was not really a threat. But you have this happening in Florida, and you have it happening in states all over the country, where about half the states in the United States have “shoot first” laws. And the majority of states in the United States have some kind of concealed carry law. And right now in the U.S. Senate, just last week a bill was introduced by Senator Begich of Alaska that would allow people like George Zimmerman to travel across state lines and take their guns with them. They would legally be able to carry their guns, for instance, into Times Square. So these people—the NRA has been successful in allowing people who are dangerous and are criminal to be able to carry guns and to be able to use them against our families and people in our communities. They have made us a much less safe nation.

CAROLINE BREWER: I am not up to speed on the recent legislation in Oklahoma, but I—you know, I do know that there have been—there has been an effort by the NRA to, once they are able to get concealed carry, then they go for permit-less concealed carry. They keep pushing and pushing until their vision is realized, where just about anybody can get a gun, and they can take that gun anywhere legally, and they can use that gun. So that’s what you see being done by the NRA in states all across this nation.

AMY GOODMAN: Reverend, Reverend Dames, there’s going to be a town hall meeting tonight. Is that right? It’s being held at—by the NAACP at the Allen Chapel AME Church on Olive Street in Sanford. Talk about what your plans are here on in, what you’re calling for, what actions are being taken in Florida.

REV. GLENN DAMES: Well Amy, there is a rally and a public forum tonight, as you stated, sponsored by the Seminole County, which is the home incident county, branch of the NAACP at the Allen Chapel AME Church. As well, there’s also, of course, a major rally on Thursday with Reverend Al Sharpton at Shiloh Baptist Church in Sanford. And there’s, of course, scattered rallies in between those times. And as well as Monday coming, the 26th, there is a major rally again at City Hall in Sanford. I’m going to pull that permit today, as a matter of fact, on behalf of our organization to have this rally.

We want George Zimmerman brought to justice. He is a racial profiler. Amy, I’m not sure if you
know, but some more 911 tapes were released, and come to find out that George Zimmerman, in the months leading up to this tragic death of Trayvon Martin, George Zimmerman identified four times a suspicious black male, which in my mind makes him a racial profiler. For those who say race is not an issue in this particular piece, it’s not the only issue, but rest assured, it is an issue. As well, he always referred to them as “suspicious.” The majority of times, every time he says something, it’s always a “suspicious black male.” That tells me, in my mind, that George Zimmerman was on a hunting trip, and he was looking to hunt him, what some have heard him say or say that they heard him say, “a coon,” in essence. He had these feeling, and for those who try to dismiss them, it’s unfair and also an insult to Trayvon’s memory. He was racial profiling. And he finally found him a victim in Trayvon Martin, in which he gunned down, needlessly, and did not care about Trayvon or his family, as you can hear the 911 caller say.

AMY GOODMAN: Reverend Glenn Dames, I want to thank you very much for being with us, pastor of the St. James AME Church in Titusville, right near Sanford. And I want to thank Caroline Brewer, as well, director of communications, Brady Campaign to Prevent Gun Violence. 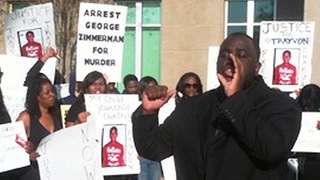