A transgender African-American woman is set to go on trial next week on charges of second-degree murder for an altercation after she was reportedly physically attacked and called racist and homophobic slurs outside a Minneapolis bar last year. Chrishaun “CeCe” McDonald received 11 stitches to her cheek and was reportedly interrogated without counsel and placed in solitary confinement following her arrest. There were reports that the dead victim, Dean Schmitz, had a swastika tattooed on his chest. McDonald’s supporters say the case is symptomatic of the bias against transgender people and African Americans in the criminal justice system. “People were very enraged about what had happened to her and the refusal of Hennepin County to recognize her right to self-defense,” says Katie Burgess, executive director of Trans Youth Support Network, who has helped draw attention to the case and notes transgender people of color are twice as likely to experience discrimination as their white peers. We also speak with Rai’vyn Cross, one of McDonald’s best friends. [includes rush transcript]

JUAN GONZÁLEZ: A transgender African-American woman is facing trial for murder after an incident outside a Minneapolis bar where she was reportedly harassed and then physically attacked. Chrishaun “CeCe” McDonald, who is 23 years old, is scheduled to stand trial later this month for second-degree murder.

But supporters say McDonald was the victim on June 5th, 2011, after two women and a man, all of them Caucasian, began harassing her and her [black] friends outside a bar, calling them racial and homophobic slurs. A YouTube video posted by supporters of CeCe McDonald describes what they say happened that night.

CECE McDONALD SUPPORTER: Chrishaun McDonald, known as “CeCe,” is a spirited student of fashion design at a Minneapolis community college, known as wise, outspoken, cheerful, with a history of handling prejudice with amazing grace. Midnight Saturday night, early June, CeCe was walking to Cub Foods with three friends. Passing Schooner’s bar, three haters—Dean Schmitz and two women—began yelling [expletives] at CeCe and her friends. An argument between the groups took place, which turned violent when one of the women broke a beer mug on CeCe’s face. It opened a large gash to her saliva gland. Next, Dean Schmitz suffered a wound from a pair of scissors through the swastika tattoo that was concealed under his shirt on his chest.

AMY GOODMAN: While the events of that night remain unclear, the fight that ensued left 47-year-old Dean Schmitz dead after he was apparently stabbed by a pair of fabric scissors that had been in McDonald’s purse. Police arrested McDonald, but did not arrest anyone else at the scene. McDonald received 11 stitches to her cheek. She was reportedly interrogated without counsel, placed in solitary confinement. There were reports the dead man, Dean Schmitz, not only had a swastika tattooed on his chest but also had a prior criminal record. McDonald’s supporters have said the case is symptomatic of the bias against transgender people and African Americans in the criminal justice system. CeCe McDonald could face up to 80 years in prison.

Katie Burgess, can you elaborate more on this case and the significance of it, how you know what you know, what you believe took place outside this bar?

KATIE BURGESS: Yes. Thank you for having us on, Amy.

So, what’s unique about this case is that—I work for an organization, the Trans Youth Support Network, that promotes racial and social and economic justice for trans youth. And specifically, we were founded out of this kind of violence that we see against young transgender women of color, specifically. The types of violence that we see are not only pandemic within our community, but all across the nation.

And we would like to also point out the ways that this violence plays out in the courtrooms. We see these kinds of legal disparities. The fact that Chrishaun is facing now two counts of second-degree murder is just unheard of. And we’re asking the county attorney to drop the charges against her.

The ways that myself and my organization got involved was that we had a relationship with CeCe prior to this. Because we’re an organization founded because of this kind of violence against young trans women of color, we had a lot of connections with community leaders and were able to get the word out about CeCe’s case fairly effectively. People were very enraged about what had happened to her and the refusal of Hennepin County to recognize her right to self-defense. And word has spread across the nation and across the world. We have seen local support from LGBT organizations and politicians and also national support from organizations such as the National Center for Transgender Equality and the Sylvia Rivera Law Project. We have a petition that’s circulating with over 15,000 signatures asking Hennepin County to drop these charges.

And we’ll be moving into trial, like you said, actually on Monday. Today will be her final pretrial hearing. And we are looking closely at that to see exactly what will be admitted into the trial. We have some concerns about what may or may not be looked at.

JUAN GONZÁLEZ: If I can, Katie, for a minute, to bring in also Rai’vyn? You’re a friend of CeCe’s. Could you tell us a little bit about her and also about the continuing harassment and problems that she and you have faced in years past?

RAI’VYN CROSS: CeCe, Chrishaun McDonald, which is also my best friend, my sister, she’s a 23-year-old trans woman of color that was walking along Schooner’s bar with a group of friends that are also GLBT that are all African American. They was attacked by three white supremacists outside of Schooner’s bar.

Yes, we have encountered this every day of our lives, as us being together. We have been—have a solid friendship of eight years. We experience this on a daily basis when we wake up, when we go to sleep, if it’s in a public place or if it’s just outside, period. Transphobic slurs, racial slurs, I mean, we best deal with it just by just—you know, just wiping it off, just keep going on, just staying strong.

She is a fashion designer, an outspoken person, a person with a smile that you cannot miss. She is a provider, a supporter of the community. And I’m here to tell the Hennepin County’s attorney, Michael Freeman, to drop the charges against Chrishaun McDonald.

KATIE BURGESS: And this kind of violence that we have seen is not unusual. A lot of the young people that I work with have experienced this type of transphobic and homophobic and racist violence in their lives, not only at the hands of such attackers, but also within the justice system. Both locally and nationally, we see—there was a report put out in 2010 by the National Coalition of Anti-Violence Programs that shows that transgender and people of color are likely to face twice the harassment and discrimination than white non-transgender folks.

AMY GOODMAN: Katie, what do you expect to come out of this case?

KATIE BURGESS: Well, we’re watching it very closely, especially today. We’re not sure what to expect coming out of this case, but what we are hoping to see is that the whole story will be able to be told in court. Later today will be CeCe’s final pretrial hearing, and which we’re watching to see if certain key points of evidence will be allowed to be in the trial, such things as the swastika tattoo on the deceased, as well as his prior record, but also this culture of violence that young trans women of color experience, whether or not expert witness testimony will be allowed to be able to show certain things, such as the drastic rate in which young trans women of color are murdered, which is, according to that report that I mentioned, 44 percent of hate murders in the U.S. are young trans women of color.

AMY GOODMAN: We’re going to have to leave it there, Katie Burgess, executive director of Trans Youth Support Network, and Rai’vyn Cross, close friend of CeCe McDonald. That does it for our show. We’ll continue to follow that case. 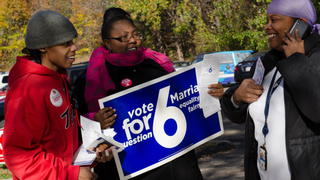