May Day Protests Span the Globe with Calls for Economic Justice, International Solidarity

Hundreds of thousands of people across the world marked May Day on Tuesday by filling the streets and demanding better working conditions, greater job security and improved quality of life. May Day, also known as International Workers’ Day, resonated with protesters from Spain to Bangladesh to Iraq and throughout the United States. “This is brutal and dictatorial,” says Mariano, a member of Spain’s General Union of Workers who denounced his country’s conservative government for recently announcing job cuts in the health and education sectors as well as tax increases. [includes rush transcript]

AMY GOODMAN: Tom Morello, singing in Union Square yesterday. Tens of thousands of people turned out in New York, hundreds of thousands around the world. He was singing “This Land Is Your Land,” as we move into the 100th anniversary of its author, Woody Guthrie. I’m Amy Goodman, with Nermeen Shaikh, here on Democracy Now! Nermeen?

NERMEEN SHAIKH: On Tuesday, hundreds of thousands of people across the world marked May Day by filling the streets and demanding better working conditions, greater job security and improved quality of life. May Day, also known as International Workers’ Day, resonated with anti-austerity protesters in Spain, Portugal and Greece. Mariano, a member of Spain’s General Union of Workers, denounced the conservative government of Spanish Prime Minister Mariano Rajoy for recently announcing job cuts in the health and education sectors as well as tax increases as of January 2013.

MARIANO: [translated] This is brutal and dictatorial. They have the absolute majority. And that is why, in parliament and in senate, they do not take into account other opinions. They impose their law.

NERMEEN SHAIKH: May Day protests went well beyond Europe into Asia with demonstrators in Indonesia, the Philippines, East Timor, South Korea and Bangladesh—all calling for higher wages and better working conditions. Among protesters in Dhaka, Bangladesh, the National Garment Workers’ Federation organized a rally where hundreds of women joined the march.

FIROZA BEGUM: [translated] We demand that workers should get a good salary to live with a standard of honor, because these garment workers bring in foreign currency, and they keep the wheel of Bangladesh’s economy active. We demand that we must get a sufficient salary, comparing the price hike of essential goods, and for the government to start a rationing system for us.

And here in the United States, the Occupy Wall Street movement renewed its campaign against inequities in the global financial system with a series of May Day protests across the country. In California, Occupy Los Angeles united with immigrants, with protesters dancing to live cumbia and reggae music and lounging on the grass.

DON LEE: Los Angeles and the whole entire nation of the United States is built on the work of immigrants, and every type of immigrant, from, you know, German to Mexican American.

AMY GOODMAN: Not all of yesterday’s demonstrations were peaceful. In Seattle, black-clad protesters allegedly used sticks to break down downtown windows and ran through the streets disrupting traffic. In San Francisco, the Occupy movement was blamed for a night of violence in which cars and small businesses were vandalized. In Oakland, police fired tear gas, sending hundreds of demonstrators scrambling.

Occupy demonstrators in the Bay Area canceled plans to shut down the Golden Gate Bridge, instead joined picket lines organized by labor groups. Clarence Thomas is a member and former officer with ILWU Local 10, representing longshore and warehouse workers in the Bay Area.

CLARENCE THOMAS: It’s very, very important that we take these actions today, International Workers’ Day, because this is the day that celebrates the struggle for the eight-hour workday in this country. It’s also a day that celebrates worker independence. Workers need to be independent. They need to be able to organize and mobilize in their own name, and they need to be able to use direct action and general strike in order to gain victories for working people.

May Day Legacy of Labor, Immigrant Rights Joined by New Generation of Occupy for Historic Protests 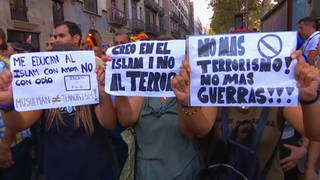