Congress approved an 11th-hour deal late last night to end the 16-day partial government shutdown and pull the nation back from the brink of an historic debt default. The spending measure passed the Senate and House of Representatives after Republicans dropped efforts to use the legislation to force changes in President Obama’s signature healthcare law. The spending bill offers only a temporary fix. It funds the government until January 15 and raises the debt ceiling until February 7. Rep. John Conyers says the focus should be on jobs, not debt. “We need a full employment bill. It is my hope that we can take the aim to create full employment for everybody in America and put it number one on our domestic agenda so that we create jobs and that we train people for important work,” says Conyers, ranking member of the House Judiciary Committee. He recently celebrated nearly 50 years in Congress, the longest-ever by an African American.

StoryDec 29, 2020Joseph Stiglitz on the Pandemic Economy & Why He Backs Sanders’ Filibuster for $2000 Stimulus Checks

AMY GOODMAN: Congress approved an 11th-hour deal late last night to end the 16-day partial government shutdown and pull the nation back from the brink of an historic default. The spending measure passed the Senate and House of Representatives after Republicans dropped efforts to use the legislation to force changes in the Affordable Care Act, President Obama’s signature healthcare law. Obama signed the spending bill last night.

PRESIDENT BARACK OBAMA: But, once again, I want to thank the leadership for coming together and getting this done. Hopefully next time it won’t be in the 11th hour. One of the things that I said throughout this process is, we’ve got to get out of the habit of governing by crisis.

AMY GOODMAN: The spending bill offers only a temporary fix. It funds the government until January 15th and raises the debt ceiling ’til February 7th.

We go now to Washington, D.C. We’re joined by longtime Democratic Congressmember John Conyers of Michigan, ranking member of the House Judiciary Committee, has served more than 48 years in Congress, longer than any other African-American lawmaker, one of the longest-serving lawmakers in Congress.

Welcome to Democracy Now!, Congressmember Conyers. Talk about the significance of this crisis for the moment being averted and what it cost the country.

We finally, after 16 days, at the last hours, were able to get to some agreement that is really very short-lived. The continuing resolution only lasts 'til the middle of January—on Martin Luther King's birthday, ironically—and the debt ceiling expires on February 7th. So, this is merely kicking the can down the road, as they say.

I think it’s important, but I’m still trying to rationalize how the non-tea-party Republicans in the House can let the tea-party-oriented members in their caucus control everything. And it’s really kind of disappointing, because you can’t negotiate whether—over a dispute over one measure, which creates healthcare for millions of Americans that can’t afford it, that we would close down the funding of the entire government. This is a tactic that is so obviously out of place and makes the legislative process literally unworkable. And so it’s my hope that we can figure out a way to get this rolling again.

Speaker Boehner is in an incredible position, and his legacy is going to be determined by whether he continues to cave in to the ultra-conservatives in his caucus or not. To his credit, it seemed to me that he wanted to be more cooperative, but he was afraid of even being dismissed from the speakership. I think he’s over that kind of a hump, but it’s at a cost of $24 billion, 800,000 people out of work. And then the government, after we signed it late last night, they say, “All government workers, please come to work the very next day.”

AMY GOODMAN: When you say cost of $24 billion, why did it cost the country, this shutdown?

REP. JOHN CONYERS: Well, the shutdown took funding wherever there was federal funding, which is laced into so many of the important programs—for young people, for schools, for healthcare. And all of those people that would have been working would have been getting income and spending it. And so, that’s where the cost figure comes from, from Standard & Poor’s.

AMY GOODMAN: And there’s another $3 billion. Clearly, Senator Mitch McConnell, who is being credited with helping to resolve this conflict, got a big payment back for Kentucky, a $3 billion earmark—

AMY GOODMAN: —for a dam.

REP. JOHN CONYERS: Yes, it’s—there were—there are a lot of things that were filtered into it that really had nothing to do with it. But we’re still wrestling, in the minds of many legislators, the issue between austerity and investment. And to me, that argument has been resolved in favor of investment, but there are still people that think that we can save our way. And this overemphasis on the national debt, to me, ignores the fact that we lost jobs. We lost work. We need a full employment bill. It’s my hope that we can take the aim to create full employment for everybody in America and put it number one on our domestic agenda, so that we create jobs and that we train people for important work and how to work.

AMY GOODMAN: Now, Congressmember Conyers, President Obama has agreed to put Social Security and Medicare on the table. You rallied with members of the Congressional Progressive Caucus and retiree advocates against the proposed chained CPI Social Security cuts. So, this certainly isn’t over.

REP. JOHN CONYERS: No, no, not at all. And, you know, the president has been stable, and he and Majority Leader Reid, they set a good example for us. And I think that he’s got to really create a legacy that has a lot more to do with putting everybody back to work. The recession is not over yet. The recovery is slow. Unemployment is still way too high. And there’s so much more that we could do.

And to think that you would have so many members, 144 in the House and 18 in the Senate, who would say, “Well, there’s nothing wrong with shutting down the whole government, not raising the debt ceiling, and really hurting the credit rating of the largest, most powerful country in civilization.” And it’s just unimaginable, the actions that they would turn to to get their way on a very small and modest bill, “Obamacare.” We’re talking about universal healthcare for everybody, single-payer. That’s what the new direction is. And yet, this kind of “everything or nothing, and we’re going to get our way on any bill,” that kind of an attitude destroys, really, or compromises the democratic legislative process—

AMY GOODMAN: Do you think we’ll see single-payer in your lifetime? I mean, you’re celebrating almost 50 years in Congress. In the next 50 years that you serve?

REP. JOHN CONYERS: I think we’re on the way to single-payer because it’s been proven in all of the studies in the countries that have it that it—that it’s cost-effective and it’s healthier for people. It saves money. We spend far more money than anybody in the world on—of countries on healthcare. And our results are really not that encouraging.

AMY GOODMAN: We’re going to go to break, but we’re asking you to stay with us for the hour, because we’re going to go back in time to a case that has been unresolved for 28 years, one that you’ve been involved with from the very beginning—

AMY GOODMAN: —calling for hearings and an investigation. And it’s the death of Alex Odeh, who was one of the leaders of the American-Arab Anti-Discrimination Committee, blown up by a pipe bomb when he opened the door to his office and received a package. This was in Orange County, California. We’re going to talk about the call for a new investigation in his assassination. Stay with us. 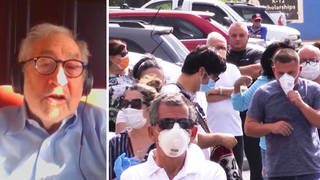