While the world focused on the conclave selecting Argentine Cardinal Jorge Mario Bergoglio to become pope, a protest took place outside that received far less attention. Protesters demanding a greater role for women in the Catholic Church released pink smoke into the air over the Vatican. Their actions came as many were waiting for white smoke, the signal a new pope had been chosen. We speak with Erin Saiz Hanna, executive director of the Women’s Ordination Conference, and Janice Sevre-Duszynska, an excommunicated female priest. [includes rush transcript]

AMY GOODMAN: We move now to our last segment. While the world focused on the selection of the Argentine cardinal, Jorge Mario Bergoglio, to become pope, a protest took place outside the Vatican Wednesday that received far less attention. As the world waited for white smoke to flow from the Sistine Chapel chimney to indicate a new pope had been chosen, smoke of a different color began billowing into the sky over the Vatican. It was released by protesters demanding a greater role for women in the Catholic Church. Democracy Now! reached one of the event’s organizers in Rome Wednesday.

ERIN SAIZ HANNA: My name is Erin Saiz Hanna. I’m the executive director of the Women’s Ordination Conference. We are the oldest and largest national organization network for ordained women priests into an inclusive and accountable Catholic Church. And we are here in Rome today with our coalition partners of women’s ordination worldwide. As we had waited for a new pope, we have been doing vigils every day here of pink smoke. As the world waited for white smoke, we were raising pink smoke to bring attention to the lack of women’s voices in the conclave and in the decision making of the Roman Catholic Church.

Yesterday, we did it as just a small vigil outside, you know, with St. Peter’s in the background. So pink smoke literally just lifted right over the sky over St. Peter’s. It was just this beautiful visual of this pink smoke all over the Vatican. And then today was a smaller pink smoke here in Rome where we lifted it just during mass. So we gathered in community with men and women who all agree that women deserve and are simply in need of a more inclusive role in the church. So we all gathered in prayer, and we lifted pink smoke in a very prayerful way then, as well.

There are so many women who have been marginalized in our church, not just women who seek larger roles like ordination, but women who’ve been divorced, lesbian women, girls who want to serve at the altar, women who use birth control. There are so many women who are left outside of the church and who have no place. So, our hope is, you know, Pope Francis will be a peacemaker, live up to his name, and really reach out to women. That would be a huge start. In 1994, Pope John Paul II closed officially any discussion on women’s ordination, and people can be fired from even discussing that. So, our hope is Pope Francis, you know, will even open the doors just to discuss it.

The Vatican is very much a monarchy, and they have a seat at the U.N., and they make very important decisions that affect women on a global level. There’s a lot of policy making. It’s more than a religion; it’s a government. And that government really affects the lives of millions of Catholic women around the world, when it comes to birth control, when it—you know, reproductive healthcare, condoms, LGTB issues. They were against the Violence Against Women Act last week. So these are all issues that I feel that women must have a stronger voice in. These statements cannot be coming from a leadership that is all old, celibate men.

JUAN GONZÁLEZ: That was Erin Saiz Hanna, executive director of the Women’s Ordination Conference, speaking to Democracy Now! from Rome on Wednesday.

AMY GOODMAN: Another woman who joined the pink smoke protest at the Vatican was a Roman Catholic priest who, along with a number of other female priests in the world, has been excommunicated because she is a woman. Janice Sevre-Duszynska was detained by Italian police last week for demonstrating at the Vatican. Officers told the AFP they were questioning her, quote, “right to wear those vestments.” But they didn’t stop her from joining the pink smoke protest. Democracy Now! reached her by phone in Rome, as well.

We had a pink smoke event at the Piazza Garibaldi here in Rome, and there were lots of people that attended it. It had rained before. And why did we shoot off the pink smoke? The pink smoke was to show—the white smoke we saw tonight at the St. Peter’s Square, but the pink smoke is about women’s decision making and leadership in our church, which is so desperately needed. We need to hear voices of women. We need to hear the interpretation of the gospel, of the gospel, from women, living and dying.

AMY GOODMAN: You’ve been listening to Janice Sevre-Duszynska speaking from Rome, as the pink smoke billowed out. 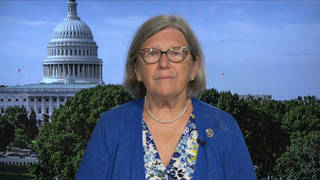