The Associated Press says the U.S. Department of Justice has secretly obtained a trove of journalists’ phone records in what its chief executive called a “massive and unprecedented intrusion.” The Obama administration seized records for the work and personal phone numbers of individual reporters, for general AP office numbers in New York City, Washington, D.C., and Hartford, Connecticut, and for the main number for the AP in the House of Representatives press gallery. More than 100 reporters work in the offices. The records were from April and May of 2012. Among those whose records were obtained were Matt Apuzzo, Adam Goldman, three other reporters and an editor, all of whom worked on a May 7, 2012, story that revealed details about a CIA operation in Yemen which stopped an alleged terror plot. AP had delayed publication of the story at the government’s request. “It seems to be terrible intrusion on the freedom of the press,” says Ramsey Clark, the U.S. attorney general from 1967 to 1969. “I don’t see how the press can operate effectively if the public and people that talk to the press have to assume that Big Brother is listening in or can seize the conversations they engage in.”

AMY GOODMAN: Well, just before we break, I wanted to move to another subject with the former attorney general of the United States here, Ramsey Clark, and that is this top story in our headlines today, the Associated Press saying the Justice Department secretly obtained a trove of journalists’ phone records, believed more than 100 reporters working at AP and outside, reporters who even used the AP phones. The significance of this? What the Obama administration—ultimately responsible, President Obama and the attorney general, Eric Holder. You were the attorney general 45 years ago.

AMY GOODMAN: AP told Attorney General Holder it was a serious interference with AP’s constitutional rights to gather and report the news. Also, this week is the 45th anniversary of the Catonsville Nine, when the Berrigan brothers and others went to the Catonsville draft office in Maryland and burned draft records in protest of the Vietnam War. You were the attorney general at the time. What was your response at the time, and what are your thoughts 45 years later?

RAMSEY CLARK: Well, my response at the time was it was passing strange that priests would be doing this. And by 1970, I had undertaken representation of Phil Berrigan and Liz McAlister in a case that was called the Harrisburg Seven, which was a major case. And I testified in Knoxville just about two weeks ago in a trial in which the same group, the peacemakers, peace seekers, were trying to prevent, by observation and revelation of what was going on just west of Knoxville, Tennessee, in remanufacturing warheads for the Trident II nuclear submarine fleet, which has the capacity to destroy life on earth. And they were convicted this week in trial in Knoxville in federal court.

AARON MATÉ: And they face up to 20 years in prison?

RAMSEY CLARK: Well, that’s a possibility, but I don’t think it’s—that’s—you know, you face longer terms than you get in nearly all those cases. But it’s—we’ll see what happens. It’s a judge that came down from Kentucky to try the case, and we just don’t know how the sentencing is going to go.

AMY GOODMAN: How did your views shift from being Lyndon Johnson’s attorney general to representing the very people who were protesting your policies?

RAMSEY CLARK: Just following your heart, I guess. That’s where mine had been and remain and what I pursued—and tried to follow the heart in government, but you have different responsibilities there that you have to meet.

AMY GOODMAN: I want to thank you for being with us, attorney general—former Attorney General Ramsey Clark. And, Renée Feltz, thanks you so much, Renée just back from visiting Lynne Stewart in prison. Will she be granted compassionate release? We’ll cover this story. Tomorrow in New York there is a vigil planned outside, in Foley Square from noon to 6:00, where people will be gathering, calling for Lynne Stewart’s release.

RENÉE FELTZ: And people can go online to sign a petition asking for the same compassionate release. And we’ll link to that on our website.

AMY GOODMAN: And we’ll cover the compassionate release issue overall for prisoners around the country.

This is Democracy Now!, democracynow.org, The War and Peace Report. When we come back, we’ll be joined by Dr. Paul Farmer. He has written a new book and continues his work of decades, setting up health clinics from Haiti to Rwanda. Stay with us. 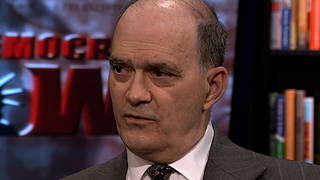