Closing arguments have begun in the historic trial against U.S.-backed Guatemalan dictator Efraín Ríos Montt, the first head of state in the Americas to stand trial for genocide. Ríos Montt is charged with overseeing the slaughter of more than 1,700 people in Guatemala’s Ixil region after he seized power in 1982. The trial has been revived after it was suspended due to intervention by Guatemalan President Otto Pérez Molina and death threats by army associates against judges and prosecutors. On Wednesday, prosecutors asked for Ríos Montt to be sentenced to 75 years in prison. Defense lawyers are expected to give closing arguments today. We’re joined by investigative journalist Allan Nairn in Guatemala City. In the 1980s, Nairn extensively documented broad army responsibility for the massacres.

AMY GOODMAN: We go from Chicago to Guatemala. Juan?

JUAN GONZÁLEZ: Well, we end today’s show with an update on the historic trial against U.S.-backed Guatemalan—former Guatemalan dictator Efraín Ríos Montt. He is the first head of state in the Americas to stand trial for genocide. The trial had been suspended but has since been revived. Ríos Montt is charged with overseeing the slaughter of more than 1,700 people in Guatemala’s Ixil region after he seized power in 1982. On Wednesday, prosecutors asked for Ríos Montt to be sentenced to 75 years in prison. Ríos Montt’s defense team is expected to give closing arguments today.

We’re going now to Guatemala City to Allan Nairn, investigative journalist. In the 1980s, Allan Nairn extensively documented broad army responsibility for the massacres and was prepared to present evidence at the trial, though he didn’t ultimately testify.

Allan, welcome back to Democracy Now! Tell us what’s happening today. You expect a verdict and a sentence?

ALLAN NAIRN: It’s possible. The trial—the trial was killed, essentially, after intervention by Guatemala’s president on April 18th, but now it apparently is on the verge of being revived. There was a fierce backlash against the efforts by the president, General Pérez Molina, to stop the trial, resistance from within Guatemala, also internationally. And yesterday afternoon, the trial got back to business. They began closing statements. The prosecutors presented their request for a 75-year sentence Ríos Montt and also that he be taken from house arrest and placed in jail to prevent him from fleeing the country after the verdict.

It’s possible a verdict could come today, but it’s also possible that it could be—the trial could be shut down at the last minute. There have been repeated death threats against judges and prosecutors. Yesterday, Ríos Montt’s lawyer, in open court, threatened to have the judges thrown in jail. A higher court could be used politically to kill the case at the last moment. So it’s really hanging in the balance. The case could be finished off today, or it could be allowed to reach a verdict.

JUAN GONZÁLEZ: And, Allan, the significance of this case? Is Ríos Montt the first former head of state tried within his own country for genocide?

ALLAN NAIRN: Yes, and this is being done within the domestic court system. It’s been a tremendous political struggle. It’s been led by the survivors of the massacres. They’ve been fighting for this for decades. And they’re on the brink of getting a verdict, of actually enforcing the murder laws.

But there are many people in the Guatemalan oligarchy, in the military, who don’t like it. They see this trial as a threat to their way of life, as a threat to their ability to continue to carry on local assassinations, which still happen in the Guatemalan countryside. In fact, as we speak, the president, General Pérez Molina, has imposed a state of siege in four municipalities to try to put down popular resistance against Canadian-U.S. silver mining projects.

AMY GOODMAN: Do you expect this verdict and sentence to actually happen today, and do you think it’s possible, 75 years?

ALLAN NAIRN: It could, if the trial is allowed to proceed without interference. It could—it could be put off until tomorrow. You can’t really predict what the verdict will be, but the prosecution has presented a very powerful, well-documented case, with the testimony of dozens upon dozens of massacre survivors, thousands of pages of documents. And Ríos Montt’s defense has not really put up a factual defense. Ríos Montt has refused to speak. They’ve just used politics, outside intervention, to try to kill the case.

AMY GOODMAN: We want to thank you, Allan, for being with us. Allan Nairn, investigative journalist. If the verdict does come down, we’ll be going to Guatemala City tomorrow to cover the story. He was asked to testify in Guatemala in the landmark trial against the former U.S.-backed dictator, Efraín Ríos Montt, on charges of genocide and crimes against humanity, though he ultimately didn’t testify. The trial could end today with a verdict and sentence. Go to our website at democracynow.org for the latest.

Before we go to credits, Juan, you will be going to Philadelphia tomorrow.

JUAN GONZÁLEZ: Yes, for the—tomorrow night is the opening of the last showing, premiering of the Harvest of Empire film, and it will be at the Riverview Plaza Stadium 17 theaters. And I’ll be speaking after the 7:25 showing.

AMY GOODMAN: And you can go to our website for details at democracynow.org. 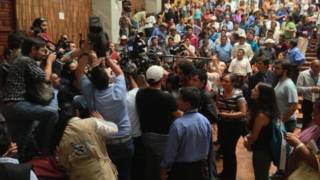