The Obama administration is backing calls for a court-appointed monitor to oversee New York City’s controversial stop-and-frisk policing program. In a brief filed Wednesday night, the Justice Department endorsed the appointment of a monitor in the event “stop and frisk” is deemed to be unlawful. A New York judge is set to decide on a lawsuit that says “stop and frisk” is unconstitutional and unfairly targets people of color. Nearly 90 percent of people stopped by police in 2011 were black and Latino, and nine out of 10 were neither arrested nor ticketed. We speak with Sunita Patel, staff attorney with the Center for Constitutional Rights and co-counsel on the stop-and-frisk federal class action lawsuit.

JUAN GONZÁLEZ: We end today’s show with news that the Obama administration is backing calls for a court-appointed monitor to oversee New York City’s controversial stop-and-frisk policing program. The move came in the form of a brief filed by the Justice Department right before a midnight deadline in a civil rights lawsuit challenging “stop and frisk.” The Department of Justice did not say whether it agrees with plaintiffs that the policy unconstitutionally targets people of color, but it endorsed the appointment of a monitor in the event that the court finds “stop and frisk” unlawful.

AMY GOODMAN: Nearly 90 percent of people stopped by police in 2011 were black and Latino. Nine out of 10 were neither arrested nor ticketed. A judge is set to rule in the coming months on whether such practices systematically violated the rights of New Yorkers, as the plaintiffs allege. In its statement, the DOJ wrote, quote, “A court-appointed monitor in this case would help the court ensure that, if any pattern or practice is found to exist, it is effectively and sustainably remedied.”

Well, for more on this development, we’re joined by Sunita Patel, staff attorney with the Center for Constitutional Rights, co-counsel on the stop-and-frisk federal class action lawsuit.

Welcome back to Democracy Now!, Sunita. Explain the significance of what happened just before midnight last night.

SUNITA PATEL: Well, the Department of Justice is tasked with ensuring that police departments around the country are following the Constitution. They have weighed in heavily and said that it is common practice and this court should follow the common practice of appointing a court-monitored, independently oversee any—any order that she institutes. This is significant. We need accountability within the police department. We need to ensure that changes are actually made and that the community has a voice in those changes and is aware of what is actually happening.

JUAN GONZÁLEZ: Well, you know, the mayor and the police commissioner apparently were very upset when they heard that this was coming down. But it is not unusual for the Justice Department to—it’s done it around the country in many constitutional issues with civil rights violations among police departments. Your sense of the importance of this in New York City?

SUNITA PATEL: Well, you know, we’re talking about the largest police department with a very significant problem. And here, there isn’t an internal system of accountability. There isn’t an external system of accountability. And the Justice Department is basically saying that you can’t—the police cannot be trusted to police themselves, there is no systemic way of ensuring that change is going to happen, and the court needs to have independent eyes and ears within the department.

AMY GOODMAN: I want to read from the end of the Department of Justice’s brief. They say, quote, “It is not realistic to ask 'the public electorate' to monitor the police department to ensure that the department’s stop-and-frisk practices are consistent with the Constitution. The public does not have the time, resources, or access necessary to properly monitor a police department.” Sunita Patel, your response?

SUNITA PATEL: Yeah, and this is in response to their contention that City Hall or that other agencies actually have some monitoring force. And it’s just ridiculous. It’s preposterous to say that, and then, at the same time, to say, “Trust us. We can police ourselves. We can actually ensure that whatever the court wants to be done will be done.” They’ve had 14 years to fix it, and they’ve decided not to do that in that time.

JUAN GONZÁLEZ: And when do you expect a decision from the judge in this case?

SUNITA PATEL: You know, we have indications that this should be coming down in the upcoming months.

AMY GOODMAN: And the significance of what has been heard in this case?

SUNITA PATEL: It is extremely significant. We’ve heard from all five boroughs, police themselves saying that there’s a problem, community members representing millions of people who have been stopped and frisked illegally, and mountains of evidence showing that there’s a widespread, systemic constitutional violations and violations based on race. There’s racial profiling going on here.

AMY GOODMAN: The numbers of people who are stopped and frisked?

SUNITA PATEL: 4.3 million in the last 10 years. We know that this number has only increased. There’s been a slight dip recently, because the police department has decided to train its officers not to document every encounter.

AMY GOODMAN: How long do consent decrees last for?

JUAN GONZÁLEZ: And in terms—there has been a dip, but it’s been largely as a result of all the publicity and the attention and the actual revelations as the court case proceeded, hasn’t it?

SUNITA PATEL: That’s right. You know, I think that they know that they’re under scrutiny, and they want to show that they’re—what they say is, “We’re slowly moving a big ship.” Well, you know, it’s been 14 years in the making, and they haven’t moved it fast enough. And the court, I think, really has, hopefully, lost patience with what they’re saying they can do on their own.

SUNITA PATEL: That’s right, and that is an astronomical number. And we’re talking about some people who have said that they’ve been stopped and frisked themselves upwards of 10, 20 times, becomes a routine course. It becomes a part of daily life. And that’s not the way New Yorkers should live.

AMY GOODMAN: We want to thank you, Sunita Patel, for being with us, from the Center for Constitutional Rights, co-counsel on the stop-and-frisk federal class action lawsuit. 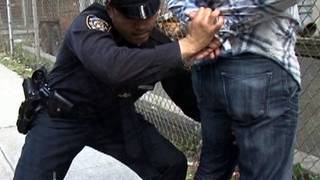