As we broadcast from the United Nations Climate Change Conference in Lima, Peru, the Philippines is being hit by a deadly typhoon for the third year in a row. More than 90 people have been killed and more than one million evacuated from their homes. The Filipino delegation at the U.N. climate talks has drawn attention over the surprising absence of Yeb Saño, the country’s former lead climate negotiator. Saño made international headlines at both of the last two climate summits after he gave emotional speeches on the link between climate change and the deadly typhoons hitting his country. We are joined by Lidy Nacpil of the Philippine Movement for Climate Justice.

StoryDec 09, 2014Climate Justice Activists from Around the World Show Solidarity with Philippines

AMY GOODMAN: We’re broadcasting from the U.N. climate summit here in Lima, Peru. The second and final week of talks began today. Negotiators from 190 nations are working on a global deal to limit climate change, due to be agreed in Paris next year. Just last week, the U.N.’s World Meteorological Organization said 2014 is on track to be the hottest on record, or at least among the very warmest. Including this year, 14 of the 15 hottest years on record will have been in the 21st century.

Deep divisions remain between developed and developing nations on how much the world’s largest polluters should cut emissions and how much they should to help poorer nations deal with climate change. Last week, Australia announced it would stop giving money to the Green Climate Fund. The head of China’s delegation criticized Australia’s decision.

SU WEI: What I can say is that it’s not good news that Australia, if it’s true, that, refuses to provide any money into the GCF. I think that’s the—I think that’s a legal obligation for all developed country parties to make their contributions, in order—that also has—would have very important impacts in the negotiating process. It’s a building process.

AMY GOODMAN: Climate activists are preparing for a major march here on Wednesday in Lima. On Saturday, hundreds of indigenous representatives of Amazonian tribes gathered on a beach in Lima to form a “human banner” that read: “Peoples’ rights, living forests.” John Quigley helped organize the action.

AMY GOODMAN: Indigenous activists opposed to mining and deforestation have faced severe harassment and violence throughout South America. Just last week, the body of an Ecuadorean indigenous leader was found dead just days after he was to travel to Lima for the climate talks. José Isidro Tendetza Antún of the Shuar Federation of Zamora was last seen heading to a meeting of activists opposed to copper and gold mines. According to the Global Witness group, at least 57 environmental activists have been killed in Peru since 2002.

Here at the U.N. climate summit, special attention has been paid to the Philippines as Typhoon Hagupit, or Typhoon Ruby, hammers the country. It’s the third year in a row the country has been battered by a major storm during the U.N. climate negotiations. At least 27 people have been killed so far. More than 900,000 people were evacuated. Thousands of homes have been destroyed. Typhoon Ruby made its first landfall in the town of Dolores in Eastern Samar, following almost the same path taken by last year’s Typhoon Haiyan, which left more than 7,000 people dead or missing. Tetet Nera-Lauron is a representative of the Philippines delegation here in Lima.

TETET NERA-LAURON: You know, reputation or experience of facing, being hit by huge typhoons, especially during these climate meetings. When we were in Doha, it was Typhoon Bopha. When we were in Warsaw, it was Typhoon Haiyan. And now that we are here in Lima, we are facing Typhoon Ruby, which is also a Category 4 super typhoon. Haiyan left, at the minimum, 6,000 people dead, 100 percent damage to our agriculture and 11 million people whose lives will be permanently affected.

I would now like to make this urgent and passionate appeal to all the negotiators here in Lima. If the Philippines is the poster child for climate disasters, we are number one in terms of being the most vulnerable country in 2013 when Super Typhoon Haiyan hit. Please, let there not be any other climate-related death. Let there not be other, you know, displacement of peoples because of climate change. We need you to get your act together to meaningfully respond to the urgency of climate action.

Welcome to Democracy Now!, Lidy. Can you talk more about what’s happening right now in the Philippines? The local term for the typhoon is Ruby; Hagupit is the international term.

AMY GOODMAN: Tell us how you’ve prepared and what’s happened.

LIDY NACPIL: Well, it’s not the first major typhoon in the Philippines this year; it’s actually more than a dozen now, close to 20. But it is by far the strongest for this year. It’s moving very slowly, which is bad, because it’s hitting longer the population. It’s moving across an area where there’s more than 32 million people living. The winds are not as strong as Haiyan, but still at the super typhoon level. So, we are very, very concerned and worried. There’s more than six feet of water in Tacloban, which was the area hardest hit by Haiyan. So people, many of them still living in tents from the Haiyan experience, have been displaced. And this is really a major nightmare for our people, because it’s just telling them over and over again that the world is failing to act on climate change and we are one of the first to suffer for that.

AMY GOODMAN: The Filipino delegation here in Lima at the U.N. climate talks has also made headlines in recent days over the surprising absence of Yeb Saño, the country’s former lead climate negotiator. Saño made international headlines at both of the last two climate summits after he gave emotional speeches over the link between climate change and the deadly typhoons. He spoke last year on the opening day of the U.N. climate summit in Poland about Typhoon Haiyan at the time, one of the strongest storms ever recorded.

NADEREV ”YEB” SAÑO: Typhoons such as Haiyan and its impacts represent a sobering reminder to the international community that we cannot afford to delay climate action. Warsaw must deliver on enhancing ambition and should muster the political will to address climate change and build that important bridge towards Peru and Paris. It might be said that it must be poetic justice that the Typhoon Haiyan was so big that its diameter spanned the distance between Warsaw and Paris.

AMY GOODMAN: That was Yeb Saño, the lead climate negotiator for the Philippines last year in Warsaw, Poland. To the shock of many, he did not show up here in Lima, Peru, this year, as well as another of the lead climate negotiators, Bernarditas Muller, who is now under another badge. She is here for Bolivia, but not for her home country, the Philippines. Lidy Nacpil, can you talk about the significance? Have they been removed? And for what reason?

LIDY NACPIL: Well, of course, we all know that the interests that will be served by the absence of Yeb and Ditas that will be those of the developed country governments, who have been actually expressing their protest about how they have—Yeb and Ditas have been very strong in their positions in defending the interests of the peoples of developing countries and the peoples of the Philippines. And we do know that there’s, of course, a lot of things going on inside the Philippine government and inside the Philippine delegation, but we do know that part of the big picture is that there have been pressure coming from these developed country governments about Yeb and Ditas being part of the delegation, and so that we do know that this has a lot to do with why they’re not there anymore.

LIDY NACPIL: Well, because it has been said that the so-called partners of the Philippines, you know, the longtime allies, like the United States, have found the positions of Yeb and Ditas too radical for their comfort.

AMY GOODMAN: And what does “radical” mean? What have they pushed for?

LIDY NACPIL: Radical means they have been demanding very strongly that the U.S., the EU and other governments of developed countries be more ambitious in their targets for mitigations, deliver on their obligations on climate finance. This is what is radical. This is a position where our two colleagues have been saying that the convention must be fulfilled, that their obligations in the convention must be fulfilled. And that, for them, is too radical.

AMY GOODMAN: Yeb Saño has not granted interviews, but he has tweeted, “They can silence my mouth. But they cannot silence my soul.” We’re going to go to a break, and we’ll continue with Lidy Nacpil, as well as Dr. Saleemul Huq of Bangladesh and Britain, talking about the critical issue of climate change. And then you will hear the voices of widows here in Peru who have lost their husbands just in the last few months, as they challenged illegal logging. They’ve come to Lima to demand reparations and demand the government do something about protecting the Amazon rainforest. Stay with us. 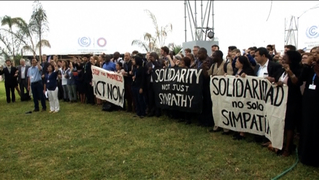