President Obama has deployed thousands of new U.S. Border Patrol agents to the southern border of Arizona, a state known for its controversial crackdown on immigrants. Caught in the middle of the border militarization are about 28,000 members of the Tohono O’odham Nation. Their federally recognized reservation is about the size of the state of Connecticut, and for a 76-mile stretch it spans both sides of the U.S.-Mexico border. Broadcasting from Flagstaff, we speak with both Klee Benally, a Diné (Navajo) activist, and Alex Soto, a member of the Tohono O’odham Nation and organizer with O’odham Solidarity Across Borders. He is also a member of the hip-hop duo, Shining Soul. “The Tohono O’odham people, which translates to desert people, are caught in the midst of colonial policies that are now militarizing our lands, from just the amount of Border Patrol agents, to checkpoints, to drones, to just the overall surveillance of our community,” Soto says.

AMY GOODMAN: “Papers” by Shining Soul, a hip-hop duo that our next guest is a member of. Yes, this is Democracy Now!, democracynow.org, The War and Peace Report. I’m Amy Goodman. We’re on the road in Flagstaff, Arizona, a state known for its controversial crackdown on undocumented immigrants under Governor Jan Brewer, who announced this week she is not running for re-election. President Obama has also deployed thousands of new U.S. Border Patrol agents to Arizona’s southern border with Mexico.

Well, caught in the middle of this are about 28,000 members of the Tohono O’odham Nation. Their federally recognized reservation is about the size of the state of Connecticut. And for a 76-mile stretch, it spans both sides of the U.S.-Mexico border. Many O’odham must now pass through checkpoints when traveling through their land, and some members living in Mexico are almost completely cut off from their tribe.

Our next guest was part of a protest in 2010 where demonstrators opposed to border militarization and checkpoints occupied the U.S. Border Patrol offices at Tucson’s Davis-Monthan Air Force Base. Alex Soto is a member of the Tohono O’odham Nation and organizer with O’odham Solidarity Across Borders. He’s also a member of the hip-hop duo, Shining Soul.

AMY GOODMAN: It’s great to have you here in Flagstaff, quite far, actually, from the border.

ALEX SOTO: Well, currently, my community is in the middle of just the current push to militarize the border region. The Tohono O’odham people are—which translates to “desert people,” are caught in the midst of colonial policies that are now militarizing our lands from just the amount of Border Patrol agents to checkpoints, to drones, to just the overall surveillance of our community. So, right now, you know, our way of life as O’odham are being affected, you know, from traditional practices to seeing family and friends, and just overall just being affected by the militarization.

AMY GOODMAN: Describe the wall to us.

ALEX SOTO: Well, on our reservation, keep in mind, the border region that you shared, 76 miles, is not necessarily a wall yet. All it is, is vehicle barriers. So, in my lifetime, at one point, you know, early childhood, there was no fence. There was nothing there. So, through my lifetime, I’ve seen the changes due to the current immigration policies that are acted out by the U.S. government. And now it’s to the point where we have vehicle barriers. But the current push for comprehensive immigration reform is now pushing towards a Berlin Wall-like scenario in my community right now.

AMY GOODMAN: Describe how you’ve seen the border militarized over the years of your growing up.

ALEX SOTO: You know, growing up—and I’m only 28 now—just being young, I was always raised to know that, as O’odham, you know, the land on both sides of the so-called U.S.-Mexico border is our land. And so, when I was young, there was no border there, other than chicken-wire fence for ranching or, you know, practices within the community. Only until—since the early '80s to the early ’90s, in particular with the passing of NAFTA, did we see the push to then regulate the border due to the level of migrant communities or indigenous people from Mexico now migrating here due to policy, economic policies by the U.S. So, you know, through the ’90s, it has escalated more and more just due to that, into 2001, with 9/11, where it pushed more policies towards militarization. So right now we're currently in that state, along—more or less because of immigration policy, as well. So, hand in hand, these issues are impacting us that are not necessarily O’odham issues, but the global context is now pushing that militarization on our land.

AMY GOODMAN: I mean, it’s so interesting that we’re talking about immigration issues when you’re the original people of this land.

AMY GOODMAN: Talk about the Know Your Rights trainings that you’re involved in.

ALEX SOTO: I’m part of a grassroots effort in the community, along with many other young people, who are taking initiative to now know our rights in relation to Border Patrol, because in our community the Border Patrol operates as if—you know, with no accountability. I mean, they—keep in mind, our reservation is not in an urban setting; it’s in a rural area. So, agents, they pretty much act out, you know, whatever they want. And that being said, community members are in a position where they don’t know what their rights are. So, my friends, in particular, the collective that I’ve been involved with, solidarity work, they’ve been putting that out there as far as what are the dos and don’ts. And in particular, when it comes down to Border Patrol interactions, they really are only supposed to ask your citizenship. They’re not supposed to ask where you’re coming from or who’s your family or who is this person in the back that looks, you know, in their eyes, illegal and so forth, even though, as you mentioned, we are the first inhabitants of the land. And keep in mind, we’re all indigenous people, as was mentioned.

AMY GOODMAN: I mean, it’s interesting you’re here at Northern Arizona University, which has a large criminal justice department. Students move on from here, many go into Border Patrol. Isn’t Border Patrol the largest security force in the United States?

ALEX SOTO: From my understanding, they’re getting up there to that point, because in our community, we have nearby border towns, such as Ajo, such as Casa Grande, where Border Patrol agents are—you know, that the push have been—you know, the escalation of what’s going on. Small rural towns are becoming just havens for them to now live. You know, there’s thousands of residents, in particular in Ajo, who now have Border Patrol agents housing there. So, it’s pretty sad in that regard.

AMY GOODMAN: I wanted to end by asking both of you about your music as a part of your resistance and your political activism. Talk about Shining Soul.

ALEX SOTO: Shining Soul is myself and my other colleague, who’s from South Phoenix, who’s a Chicano, Franco Habre, aka The Bronze Candidate. My hip-hop project is called Shining Soul, so together we’re a duo. You know, we rap. We make our beats. And with our music, we’re able to express what’s happening in our communities, you know, in the spirit of Public Enemy, in the spirit of NWA, to let not just our communities know, but the outside world, that these issues are affecting us, but it’s not just an indigenous issue or a Chicano issue or, you know, any—it’s everybody’s issue. So, from music, you know, dope beats and dope rhymes, as they say, you know, as an emcee, in the spirit of hip-hop’s—you know, in its early starts, you know, I spread that message in that regard, including his own regard is through his music, as well.

AMY GOODMAN: Klee, talk about your music in Blackfire.

KLEE BENALLY: Well, music is a tool for social transformation and change. I mean, in an era where we see capitalism as the enemy of Mother Earth, and indigenous people are tokenized, and we are—continue to face the ongoing genocide of our people—because, I mean, you asked what is the impact of global warming on indigenous people. It is genocide. I mean, the resource extraction on our lands is the result that you see with the symptoms of global warming. And so, music, for me, is an opportunity, a powerful opportunity, to get that message out there and to let people know that we need hope, but we need action. We have to meet that, match that.

KLEE BENALLY: Outta Your Backpack Media was started in 2004 as a response to the need for media justice in indigenous communities. So what we do is we offer free workshops and resource kits for indigenous youth and empower them to be able to tell their own stories, because we know, and as you know, corporate media is not going to do the job for us. We need to do it ourselves.

AMY GOODMAN: And who are you training?

KLEE BENALLY: I work with indigenous youth, primarily high school ages, and we’re a collective. We’re all volunteer. And what we do is we train youth to become mentors themselves, to participate and educate other youth. So, really, it’s a spreading, it’s a growing movement. It’s connected to the music that Alex is doing; it’s connected to my music. And really, there is a strong upsurgence and uprising of indigenous people, not just with Idle No More, because we’ve never been idle. We are still part of this struggle. We’re still here.

AMY GOODMAN: Idle No More being the indigenous movement in Canada.

KLEE BENALLY: Yeah, and we’ve never been idle. My elders never gave up. When the U.S. government forces were coming to take their land up in Big Mountain and Black Mesa, which I believe you’ve been there—

AMY GOODMAN: My first radio documentary in 1985 was called A Thumbprint on Mother Earth, and, yes, I came out here to Flagstaff, went to Big Mountain and looked at the plight of the Diné and Hopi people. Often it was cast as a battle between these two tribes. But, in fact, when you came here and looked, you saw Peabody Coal behind the whole thing.

KLEE BENALLY: And that’s the connection to global warming. I mean, as long as people are tied up in these unsustainable lifestyles and continue down this destructive path that fuels this war against our mother, the Earth, then we’re going to have this conflict. And that’s—the resistance is still going on today. People are still on the land. They are still staying strong, carrying on our ways of life.

AMY GOODMAN: We’ll link to that documentary, A Thumbprint on Mother Earth, and also to the work of our guests. Alex Soto, thanks so much for being with us, O’odham Solidarity Across Borders, and Klee Benally, Diné, Navajo, activist. 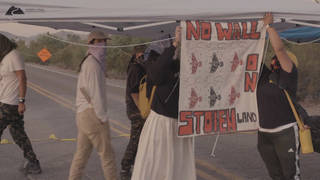