Ten months ago, Laura Poitras and Glenn Greenwald flew to Hong Kong to meet National Security Agency whistleblower Edward Snowden. They soon began exposing a trove of secrets about the NSA and the national surveillance state. They didn’t enter the United States again—until today. In this exclusive video, you can watch Poitras and Greenwald speaking for the first time since their return to the country, on Friday afternoon at the George Polk Awards in New York City. They were joined by their colleagues Ewen MacAskill of The Guardian and Barton Gellman of The Washington Post, who shared with them the George Polk Award for National Security Reporting.

See interviews on Democracy Now! with Laura Poitras, Glenn Greenwald, and all of our NSA coverage.

LAURA POITRAS: So, I’m really incredibly honored to be here and thankful to the Polk committee for giving me a really good excuse to come home. This is the first time I’ve been home since I boarded a plane with Glenn and Ewen to go to Hong Kong, and so it’s really spectacular to be here. And it’s also quite disorienting. Last May, you know, the field, what we looked at, was a lot of uncertainty, risk, concern for everyone, and so it’s really extraordinary to be here and receive this award. But I think that it’s important also that we remember that when we actually do this reporting, the enormous risks that journalists take on and especially that sources take on, and in the case of Snowden, putting his life on the line, literally, to share this information to the public, not just the American public, but to the public internationally.

And we—I want to say something about working with Glenn and Ewen. People—you don’t really know how people will respond to risk, until you’re confronted with it. You know, you hope that you’ll stand up and that you’ll have each other’s back, and that those will be the people who will protect you and get you home safely. And I just want to say that this award would not be possible without their courage and bravery and fierce reporting every step of the way. And we were, as Ewen said, untested working together. We had each had our areas of expertise, but we got on the plane having never worked together and did something and worked together in a way that was really extraordinary, and I’ll forever be bound to them.

None of us would be here—Bart, Ewen, Glenn, The Washington Post, The Guardian, The New York Times, all the people who are being offered these awards—without the fact that someone decided to sacrifice their life to make this information available. He’s not the first person who’s sacrificed their life, but he came forward with information that allows us to know what’s actually happening. And so this award is really for Edward Snowden. Thank you.

GLENN GREENWALD: First of all, thank you so much to the Polk committee and Long Island University for this award. The reporting that we’ve done has received a lot of support and a lot of praise and the like, but it’s also received some very intense criticism, primarily in the United States and the U.K. And so, to be honored and recognized by our journalistic colleagues this way—speaking for myself, at least—means a great deal. I’m also really honored to be able to share the award with the people that I call my journalistic colleagues, who are on stage here with me, the people that James Clapper calls “accomplices.” You know, it really is true that the story could not have been told without numerous people, committed to telling it, involved every step of the way.

And I’m finally really happy to see a table full of Guardian editors and journalists whose role in this story was much more integral than the publicity generally recognizes. I mean, I think it’s easy to look back now and think this is so obviously such an incredibly important journalistic story and to think that any editor or newspaper would simply dive right in and want to aggressively tell the story, but it really wasn’t true. Back in those early days of Hong Kong, there were all kinds of very grave question marks hanging over the source, the material, the legal liability, the political reaction. And I’m so happy that I was part of an institution at The Guardian staffed with incredibly intrepid editors and reporters. Ewen named a few of them—many of them, but certainly leading the list is Janine Gibson and Stuart Millar and Alan Rusbridger, who really never flinched in not only allowing us, but pushing us and encouraging us to pursue the story as fearlessly and aggressively as possible. And I really believe that the reporting could not have happened, the way that at least I thought that it should happen, had it not been for The Guardian. So I certainly consider them an integral part of this award.

Just one final point, which is that when we were in Hong Kong, we actually spent, obviously, a great deal of time talking about surveillance policies and the documents and the like, but we also spent at least as much time, if not more so, talking about issues of media and journalism. And in part, that was because we knew that how the media treated this story would be a major part of how—of what the impact was; in part, we knew that it was because the debate that we hoped to trigger was not just one about surveillance, but about the proper role of journalism and the relationship between the media and the government or other factions that wield great power. But we also knew that we were doing this reporting in the context of what already was some pretty grave threats to the news-gathering process, in terms of the unprecedented attacks on whistleblowers by the Obama administration, as well as the controversy that had happened literally weeks before we began publishing, which was the trolling through AP and phone—emails and phone records of AP reporters and editors, and then formally declaring James Rosen of Fox News a, quote, “co-conspirator” for having done what journalists do every single day, which is work with their source to gather information that the public should know. And I think it’s important to recognize how intensified those threats became over the last nine or 10 months.

There are ways to intimidate journalists. You can imprison them en masse, but there are other ways to do it. And calling journalists working on stories “accomplices,” or having powerful chairmen of committees specifically accuse journalists of being criminals and advocating for their prosecution, or having major media figures openly debate whether we ought to be prosecuted is a way to intensify that climate of fear, as is detaining my partner or marching into The Guardian's newsroom and forcing them to destroy those laptops. And I think, ultimately, the only way to deal with those kind of threats is to just do the reporting as aggressively, if not more so, than you would have absent those threats. And I feel like all of the journalists involved in this story have done that, and I'm really proud to have worked with so many who did.

And then, finally, you know, I think journalism in general is impossible without brave sources. I know our journalism, in particular, would have been impossible without the incredible courage of Edward Snowden. And it’s really remarkable that the reporting that we’ve done has won all sorts of awards, not just in the United States, but around the world, and he, in particular, has received immense support, incredible amounts of praise from countries all over the world and all sorts of awards, and the fact that for the act of bringing to the world’s attention this system of mass surveillance that had been constructed in the dark, he’s now threatened with literally decades in prison, probably the rest of his life, as a result of what the United States government is doing, I think, is really odious and unacceptable. And I hope that, as journalists, we realize how important it is not only to defend our own rights, but also those of our sources like Edward Snowden. And I think each one of these awards just provides further vindication that what he did in coming forward was absolutely the right thing to do and merits gratitude, and not indictments and decades in prison. Thanks very much. 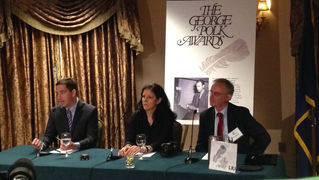