A new report reveals the National Security Agency is recording every cellphone call made in the Bahamas, even though the United States has said the Caribbean nation poses “little to no threat” to Americans. The story is based on documents leaked by Edward Snowden that describe a classified program called SOMALGET, which was put in place by the NSA without the knowledge or consent of the Bahamian government. Instead, the news website The Intercept reports the agency seems to have obtained access through the U.S. Drug Enforcement Administration. One NSA document says “the overt purpose” for recording calls in the Bahamas is “for legitimate commercial service.” But the same document adds: “Our covert mission is the provision of SIGINT,” or signals intelligence. Documents released by Snowden show the system is part of a broader program known as MYSTIC, which also monitors the telephone communications in Mexico, the Philippines and Kenya, as well as one other country — which The Intercept says it is not naming in response to government concerns that doing so could lead to increased violence. We speak to the story’s lead reporter, Ryan Devereaux.

AARON MATÉ: A new report reveals the National Security Agency is recording every single phone call made in the Bahamas, even though the U.S. has said the Caribbean nation poses little to no threat to Americans. The story is based on documents leaked by Edward Snowden that describe a classified program called SOMALGET, which was put in place by the NSA without the knowledge or consent of the Bahamian government. Instead, the website The Intercept reports the agency seems to have obtained access through the U.S. Drug Enforcement Administration. One NSA document says “the overt purpose” for recording calls in the Bahamas is, quote, “for legitimate commercial service.” But the same document adds, quote, “Our covert mission is the provision of SIGINT,” or signals intelligence.

AMY GOODMAN: Documents released by Snowden show the system is part of a broader program known as MYSTIC, which also monitors the telephone communications in Mexico, the Philippines, Kenya, as well as one other country which The Intercept says it’s not naming in response to specific credible concerns that doing so could lead to increased violence.

For more, we’re joined by the story’s lead author, Ryan Devereaux, a staff reporter with The Intercept. His new story with Glenn Greenwald and Laura Poitras is “Data Pirates of the Caribbean: The NSA Is Recording Every Cell Phone Call in the Bahamas.”

Welcome back to Democracy Now!, Ryan. So, talk about your findings. Summarize them, step by step.

RYAN DEVEREAUX: Right. So, as you mentioned, our story details an NSA program called MYSTIC, first detailed in a Washington Post story. MYSTIC was developed by the NSA in 2009. It’s variously sponsored through a number of subprograms which are controlled by the NSA’s Commercial Solutions Center. This is the NSA wing that works with the NSA’s secret corporate partners. As you know, the NSA wouldn’t be able to function if it wasn’t for the corporate partners that it relies on to gain access to communications networks in various countries. It’s also co-sponsored by the CIA, Central Intelligence Agency, and the Drug Enforcement Administration, the DEA. So, as you mentioned, this program has gained access in Mexico, Kenya, the Philippines, the Bahamas, and one other country that The Intercept is not naming at this time.

AMY GOODMAN: Now, why don’t—have you—is the government telling you not to name it?

RYAN DEVEREAUX: This is a conversation that we had for weeks, as we sort of reported this story, trying to determine whether or not it was responsible to name this country. The NSA and the government didn’t want us to name any of these countries. We named four of them. With this final country, we came to the conclusion that naming it would very likely increase risk for people on the ground. And as you know, Amy, this is one of those decisions that, as a journalist covering national security stories, is very difficult to make. And we don’t take it lightly at all. But when it comes to potential for people being killed, we take that very seriously. Unfortunately, that’s about as much as I can say about that country. We did, however, name a number of other countries that the government doesn’t want us to name, including the Bahamas.

Now, it’s important in understanding the story to understand the difference between MYSTIC and SOMALGET. MYSTIC is the Commercial Solutions Center program that provides legitimate commercial services to foreign governments, while collecting covertly, on the side and in the background, signals intelligence on those countries. So, this program targets the mobile communications networks of these countries. Basically, what the NY—I’m sorry, what the NSA does is sneak in there through its commercial provider and pull out signals intelligence. So, the second program, SOMALGET, which is active in the Bahamas, is even more robust. What SOMALGET does is attacks the mobile communications network and sucks up the actual content of calls on that line. So, in the Bahamas, the NSA is able to pick up every single phone call on the mobile communications network and essentially house those calls for up to 30 days, allowing U.S. analysts to go back and retrieve the communications of people who they weren’t targeting. The idea is that they are able to listen in on conversations that they weren’t looking for in the first place. In the case of the Bahamas, where the most realistic reason why the NSA might have an interest in things going on in the Bahamas is drug issues, smuggling issues—

RYAN DEVEREAUX: It’s a key tax haven, but these documents do not lay out any interest on the part of the NSA in taking down money launderers. Though the NSA may very well be interested in that, this specific program, according to the documents, targets drug traffickers and human traffickers. It does not target the major financial institutions and Western banks that underpin the black market for drug trafficking and human trafficking. It is about revealing specific traffickers. The documents talk about uncovering a plot to ship nearly 90 pounds of marijuana to the United States. This isn’t about taking down the sort of power brokers in the drug trade.

So what the NSA has been able to do here in the Bahamas is basically collect everything that’s there, be able to basically resurrect conversations at will. And they’re using this as a test bed, basically. That is the exact phrase that the NSA uses in the documents. The Bahamas is being used as a test bed and for implementation of these systems elsewhere.

AARON MATÉ: So that’s key. So, it’s not particularly the case that they’re going after somebody in the Bahamas. The Bahamas just could be a test run for their operations worldwide. But let’s go into this. You basically expose this Trojan horse, where the DEA asks the Bahamas for a wiretap, say, on a drug dealer. The DEA then takes that wiretap and hands over access to Bahamian telecommunications to the NSA, who then taps the entire country. Is that legal? And could that then jeopardize the existing and legitimate law enforcement actions that are in place with the DEA?

RYAN DEVEREAUX: So this is one of the most important elements of this story, I think, for people to understand. On the legal issue, the NSA is operating in a pretty gray area here. The Bahamas has been working in the last several years to sort of establish statutes surrounding communications intercepts, but it’s all sort of still in the works. A lot of other countries around the world have existing standards and statutes regarding the interception of communications. Now, that’s not to say this is legal by—under Bahamian law, right? It doesn’t seem to be. It seems to be illegal. But still, the Bahamas is a bit behind some other countries in terms of rigorous standards. With respect to U.S. law, under Executive Order 12333, which the NSA and the CIA uses to conduct surveillance abroad, there’s a lot that U.S. analysts and agents can do. So this could very well, under Executive Order 12333, be illegal for the NSA to be doing.

Now, the more important question about what this means for U.S. cooperation with foreign law enforcement agencies and the DEA’s operations abroad, this is central and key, because the idea of lawful intercept, the very thing that allows the NSA access to these networks, is premised on the idea that you have a specific person that you’re targeting who is under suspicion of criminal activity. A judge signs a warrant. You know, this is judicially approved, and you go after one person. You don’t tap an entire country in hopes of finding something that’s interesting.

AMY GOODMAN: And the role of private contractors? We just have 30 seconds.

RYAN DEVEREAUX: The role of private contractors, as I mentioned here, is essential. The NSA wouldn’t be able to do what it does without the help of the private sector. And that’s exactly how they got in here in the Bahamas and how they get in in other countries around the world.

AMY GOODMAN: And what most surprised you?

RYAN DEVEREAUX: What most surprised me is that it’s the Bahamas. This is a Carnival cruise destination; this isn’t a terrorist hotbed.

AMY GOODMAN: Ryan Devereaux, we want to thank you very much for being with us. Ryan Devereaux is a staff reporter with The Intercept. His new story with Glenn Greenwald and Laura Poitras is “Data Pirates of the Caribbean: The NSA Is Recording Every Cell Phone Call in the Bahamas.” We’ll link to The Intercept at democracynow.org. 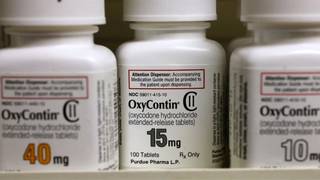 “Crime of the Century”: How Big Pharma Fueled the Opioid Crisis That Killed 500,000 and Counting