In the wake of Friday’s attacks in Paris, governors of at least 27 U.S. states have said they will not accept Syrian refugees. A Syrian passport which appears to be fake was found near the body of one of the Paris attackers, whose fingerprints matched someone who passed through Greece and the Balkans. But all the attackers identified so far are European nationals. The Obama administration has said it still plans to accept Syrian refugees, noting they are intensely vetted. We get reaction from Roula Allouch, national board chair of the Council on American-Islamic Relations.

StoryNov 17, 2015We are Angry over Death of My Cousin in Paris, As Well As the Deaths of Children in Iraq & Syria

AMY GOODMAN: In the wake of Friday’s attacks in Paris, governors of at least 27 U.S. states have said they won’t accept Syrian refugees. A Syrian passport which appears to be fake was found near the body of one of the Paris attackers, whose fingerprints match someone who passed through Greece and the Balkans. But all the attackers identified so far are European nationals. The Obama administration said it still plans to accept Syrian refugees, noting they’re intensely vetted. Only about 1,500 Syrian refugees have been resettled in the United States since the Syrian conflict began in 2011.

We’re joined right now by Roula Allouch, who is the national board chair of CAIR. That’s the Council on American-Islamic Relations.

Can you respond to this growing number of governors throughout the United States who are saying no to refugees?

ROULA ALLOUCH: Yeah, first, if I may, I’d like to offer my condolences to the previous guest, my fellow guest on today’s show, for her loss and for her family, and my thoughts and prayers are with her. But I also commend her for her courage in speaking in support of humanity, and also offer condolences to the people of Paris and France and all those who are victimized by these horrific acts.

Certainly, we see these governors coming out and speaking out against having refugees from Syria come and find refuge in the United States. And truly, this is a really disturbing situation. These refugees are people that are fleeing from the very same horrific acts that took place, that we have condemned and seen in Paris and Beirut and other places. They’re people that are fleeing war and persecution. And it’s really disturbing and very un-American for these governors to be saying that we, as the United States, wouldn’t offer a place of refuge and a place of safety and security for people that have been suffering from horrific acts for many, many years now.

MARTIN SCHNITZLER: —old or a hundred. I’m over your [bleep]. The whole country is. Check out Facebook. Check out postings. This—

GOV. ROBERT BENTLEY: And I think the thing that I want to do as governor is to make sure the people of Alabama are safe. And if there is any—if there’s even the slightest risk that the people who are coming in from Syria are not the types of people that we would want them to be, then we can’t take that chance.

GOV. PETER SHUMLIN: And I think that the governors who are taking those actions are standing—stomping on the qualities that make America great, which is reaching out to folks when they’re in trouble and offering them help, not hurting them.

ROULA ALLOUCH: Yeah, sure. I mean, I commend the governor of Vermont and welcome the remarks by President Obama in saying that despite the concerns that have been expressed by many, that we will continue to welcome these refugees in, and second what was said by the government of Vermont: The United States of America has always been a place that is seen as a beacon of light and hope for immigrants. We’ve got the Statue of Liberty that stands as a symbol of that for our nation, and we’ve got American values and principles that say that we will welcome people in. And, you know, we say, “Give us your hungry, your poor.” And we will be a place for security and safety for people that are fleeing horrible places and places where they’re suffering from horrific atrocities. And that’s exactly what the Syrian people are experiencing today. 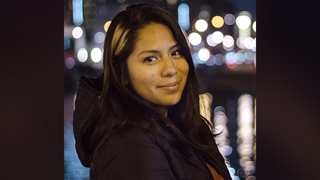 We are Angry over Death of My Cousin in Paris, As Well As the Deaths of Children in Iraq & Syria