We are Angry over Death of My Cousin in Paris, As Well As the Deaths of Children in Iraq & Syria

On Sunday more than 1,000 people overflowed a ballroom at California State University, Long Beach to honor Nohemí González, the 23-year-old student who was shot dead on Friday during the Paris attacks. González was a senior at the school. She was studying for a semester at Strate College of Design in suburban Paris. On Friday she was eating at a restaurant fired upon by gunmen. Nohemí González has been described as a proud first-generation Mexican American. We speak with her cousin, Miriam Padilla. “We are angry that my cousin is dead, but we are also angry that there are hundreds of children in other families that are dying in Syria, in Iraq and in other parts of the world,” Padilla says.

AMY GOODMAN: We turn right now to what happened on Sunday. More than a thousand people overflowed a ballroom at California State University, Long Beach to honor and remember Nohemí González, the 23-year-old American student shot dead on Friday during the Paris attacks. Nohemí was a senior at the school. She was studying for a semester at Strate College of Design in suburban Paris. On Friday, she was eating at a restaurant in Paris fired upon by the gunmen.

University President Jane Close Conoley said, quote, “Nohemí’s senseless murder is our worst nightmare. Taking the life of an innocent is an assault on our hearts and on our world. Nohemí was an innocent of great promise, a light in our community.” Nohemí González has been described as a proud first-generation Mexican American.

Her cousin, Miriam Padilla, joins us now from Los Angeles.

Miriam, our condolences to you and to your family. Can you tell us who Nohemí is, was?

MIRIAM PADILLA: Yeah. First, first, we’d like to—on behalf of my family, we’d like to say that we stand in solidarity with the family and friends of all the victims and the people of France. Nohemí, she was a very—she was a very outspoken person. She was very cheerful, very bubbly. You know, we grew up together, my siblings and her family. She was a very—she was a go-getter, you know? And she wanted—if she wanted something, she would do it. And she was very excited to learn and to have opportunities that, you know, our parents never had. And—

AMY GOODMAN: And can you tell us how you learned what happened to Nohemí on Friday?

MIRIAM PADILLA: Yeah. My Aunt Beatriz, which is Nohemí’s mom, she called—she called my older sister, and my sister called us from Seattle—or, in Seattle. And so, then I flew down here. And my aunt found out because of her boyfriend. My cousin’s boyfriend told her.

AMY GOODMAN: Nohemí has described herself as a proud first-generation Mexican American. Her parents are from Mexico. Can you talk about your response, or how she might have responded, knowing her well—you are her cousin—to this latest news in state after state in the United States, governors saying they will not accept Syrian refugees? I think the number we’re at now is something like in 27 states.

MIRIAM PADILLA: Right. You know, we feel that attacks on unarmed civilians to publicize a political objective is a huge crime against humanity. But as human beings and as first-generation students and as children who come from immigrants or parents who migrated from Mexico, we understand that, you know, some of the most—or the most victims that—or the ISIS victims are Muslims and Arabs themselves. And this is something that I think we—as much hurt and pain that we are going through, we have to analyze the entire situation as human beings and realize that it’s much more than just the attack in Paris.

AMY GOODMAN: In your—why her heritage, why Nohemí’s heritage, as a Mexican American—how that played out in her life and what she chose to do, in her traveling to Paris?

MIRIAM PADILLA: Why—I’m sorry, why is it important?

AMY GOODMAN: Just, yes, why it was important to her? Do you see a connection between your own heritage, her own heritage, and her love of education and travel?

MIRIAM PADILLA: Right. Well, it’s like I said. My aunt and uncle, they migrated from Mexico to give my cousins a better opportunity to educate themselves and to succeed and to do something and to give back to the community. And, you know, one of her greatest goals was to go to school and to finish and to make her parents proud. And it’s important that we talk about heritage, because, you know, the issue with the refugees that are coming to the U.S. is because of the violence, and it’s the same issue in Mexico and all over Latin America. People are—people are leaving their homelands to come to the U.S. in the hopes—in the hopes of a better future.

AMY GOODMAN: Can you talk about why we’re speaking to you in Los Angeles now? You’re a student at Evergreen State College in Olympia, Washington, correct?

MIRIAM PADILLA: Right. Yeah, like I said, I live in Washington, but I came down here to be with my family—my sister lives here, my aunt lives here—and just for moral support, to be together. It’s very hard, it’s very difficult, to be far away when, you know, this tragedy happened. It’s easier to cope with it as a family than individually.

AMY GOODMAN: And do you have a message, as we wrap up this conversation—the Paris attacks were Friday, your cousin was killed in the midst of those attacks—in both a message for President Obama and the other world leaders? One of the first responses now is bombing Syria, and the next response has been these governors in the United States to crack down on migration.

MIRIAM PADILLA: Well, you know, there have been many, many tragedies so far these last few days in many parts of the world. And I think that it’s really important to not compare oppressions or compare tragedies. It’s important, you know, as individuals, as human beings, to come together and unite, and to stop. You know, we’re angry. We’re angry that my cousin is dead. But we’re also angry that there are hundreds of children in other families that are dying in Syria, in Iraq and in other parts of the world. And we—we thank everyone who made my cousin smile.

AMY GOODMAN: Miriam, thanks so much for being with us. I know how hard this must be. And again, our condolences to your whole family. Miriam Padilla is a student at Evergreen State College in Olympia, Washington, but we’re speaking to her in Los Angeles, where she has gathered with her family around the death of her cousin, Nohemí González, who was killed in the Paris attacks on Friday. We’ll be back in a minute. 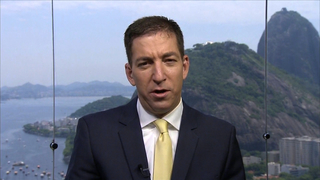