Who Killed the Argentine Prosecutor? 400,000 March for Justice in Buenos Aires as Controversy Grows

As many as 400,000 people marched through the pouring rain in the Argentine capital of Buenos Aires on Wednesday demanding an independent judiciary. The march came one month after the mysterious death of special prosecutor Alberto Nisman, who had accused Argentina’s president, Cristina Fernández de Kirchner, of helping to cover up Iran’s role in the deadly 1994 bombing of a Jewish community center that killed 85 people and injured hundreds in Buenos Aires. On January 18, Nisman was found dead in his apartment of a gunshot wound to the head. His body was discovered just a day before he was due to testify before lawmakers on his findings on the 1994 attack. Just four days before his death, Nisman appeared on television and outlined his allegations against the president and Foreign Minister Héctor Timerman. Investigators initially said Nisman’s death appeared to be a suicide, but no gunpowder residue was found on his hands. If it was not a suicide, who killed him? That question has gripped Argentina for the past month. We make sense of this unfolding story with Sebastian Rotella, senior reporter for the investigative news website ProPublica. He first covered the investigation into the 1994 bombing as a reporter for the Los Angeles Times based in Buenos Aires.

StoryJan 13, 2023Legendary Prosecutor Luis Moreno Ocampo on “Argentina, 1985” and Why Democracy Is at Risk Today

AMY GOODMAN: This is Democracy Now!, democracynow.org, The War and Peace Report. I’m Amy Goodman. As many as 400,000 people marched through the pouring rain in the Argentine capital of Buenos Aires Wednesday, demanding an independent judiciary. The march came one month after the mysterious death of special prosecutor Alberto Nisman, who had accused Argentina’s president, Cristina Fernández de Kirchner, of helping to cover up Iran’s role in the deadly 1994 bombing of a Jewish community center that killed 85 people and injured hundreds in Buenos Aires. At Wednesday’s march, protesters waved placards reading “Truth” and “Justice,” while others held posters saying “I am Nisman.”

EDUARDO DI GIORGIO: [translated] There was a death. Nisman worked there for, I think, 10 years. I think he deserves our respect, and I’ve basically come to support other prosecutors who are investigating other cases, mainly for this.

AMY GOODMAN: On January 18th, Alberto Nisman was found dead in his apartment of a gunshot wound to the head. His body was discovered just a day before he was due to testify before lawmakers on his findings on the 1994 attack. Just four days earlier, he appeared on television and outlined his allegations against the president and Foreign Minister Héctor Timerman.

ALBERTO NISMAN: [translated] The memorandum, the signing of the memorandum in the finalization of a process of impunity that started two years ago. In January of 2012, President Cristina Fernández de Kirchner ordered her foreign minister to disassociate Iran from the AMIA case for reasons I am going to explain.

AMY GOODMAN: Investigators initially said Nisman’s death appeared to be a suicide, but no gun powder residue was found on his hands. If it wasn’t a suicide, who killed him? That question has gripped Argentina for the past month. Could it have been Iranian agents or allies of the president or rogue intelligence agents or political opponents of the president?

To help us make sense of this unfolding story, we’re joined by Sebastian Rotella. He is a senior reporter for the investigative news website ProPublica. His most recent piece is headlined “Alberto Nisman and Argentina’s History of Assassinations and Suspicious Suicides.” He first covered the investigation into the 1994 bombing as a reporter for the Los Angeles Times, when he was based in Buenos Aires.

Welcome to Democracy Now!, Sebastian. Can you just lay out for us what has taken place and why this—I don’t know—do you think it could bring down the government of Cristina Kirchner?

SEBASTIAN ROTELLA: Thank you. Good morning. I don’t know if it could bring down the government, but it is certainly, perhaps, the worst crisis in Argentine democracy since the return of democracy in 1983. And it is a fascinating case in that you have this history of investigations that are like labyrinths that lead not to justice, but to new labyrinths where there’s intense suspicion of government manipulation, of corruption, of the use of cases like the AMIA case, like this terrorist case, to—as part of wars within the security forces, and politics instead of reaching the truth. So now you’re seeing a really profound moment where people are out in the streets protesting about this case and this suspicious death, but also a larger culture of impunity and support for strengthening the justice system.

SEBASTIAN ROTELLA: I beg your pardon?

AMY GOODMAN: Explain what happened in the 1994 bombing of the Jewish community center.

SEBASTIAN ROTELLA: It was the worst anti-Jewish attack in the history of the hemisphere. It was a huge bombing of the AMIA Jewish community center in Buenos Aires, which had been preceded two years earlier by another terrorist attack, a car bomb attack on the Israeli Embassy. And there were immediate suspicions and evidence and intelligence pointing at Middle Eastern terrorists, at Hezbollah, at Iranian diplomats, but all kinds of theories, all kinds of murky mysteries and contradictions. The investigation was marred by ineptitude and corruption and false leads, and police forces and intelligence services battling each other. In fact, a lot of the original investigators were themselves charged with cover-ups or bribery, obstruction of justice.

Nisman became a special prosecutor appointed by the government in 2004 and made considerable progress in achieving indictments of Iranian—alleged Iranian spies and Hezbollah operatives, for whom Interpol warrants were issued in 2007. What happened in 2013 was that the government of Cristina Kirchner changed its policy very dramatically and reached an agreement with Iran, ostensibly to set up a truth commission that would investigate the attack. What Nisman alleged was—this agreement itself was obviously legal, but he alleged that there was a secret criminal conspiracy to absolve Iran behind this memorandum and that Argentine spies were working against him and even negotiating this agreement with some of the chief suspects in Iran, fugitives in the case.

AMY GOODMAN: Now, when—after Nisman died and it was ruled a suicide, the president, Cristina Kirchner, said she thought it was a suicide, but she has since changed her view and said she believes he was murdered.

SEBASTIAN ROTELLA: That’s right. This has caused great consternation and confusion. She very quickly came out and said she thought it was a suicide. And she and her government, of course, deny these charges, which are just charges. And she said she felt Nisman had been mutilated by allies in the SIDE, intelligence service, to undermine her government by planting false leads. Then, a few days later, as you said, she changed her view and said—not really citing new evidence, but her new thesis that she expressed publicly was that she felt he had been killed by those same forces as part of a larger plot to undermine her government.

So, as you can imagine, this has caused—in a country where people are kind of automatically suspicious of these kinds of cases, where there have been staged suicides and political assassinations that have been covered up at the highest levels in the past, this change in sort of the assessment from the president, combined with questions about this death, which may have been a suicide, but it’s obviously a strange death with very strange timing by a man who had made very powerful accusations against the president, caused incredible doubt and suspicion.

AMY GOODMAN: Opposition Congresswoman Laura Alonso presented her testimony during the investigation into Nisman’s death last week. She was speaking to the prosecutor in charge of the case, Viviana Fein.

LAURA ALONSO: [translated] In the minutes in which we were alone, Prosecutor Nisman, while he explained to me the key points of the complaint, looked me in the eyes and said, “Laura, Cristina Kirchner ordered everything.” He told me he was going forward with the complaint. And I asked Nisman, I said, “Don’t give me the details of the complaint, because I don’t want to find out, nor is it my role to find out, but I do want you to tell me, yes or no, if you present this complaint, will I have to call for the president’s impeachment?” Nisman took a breath and said, “Yes.”

AMY GOODMAN: That’s opposition Congresswoman Laura Alonso. We only have a minute to go, Sebastian. Can you comment on what she’s saying and what led to Nisman filing a criminal complaint against the president herself?

SEBASTIAN ROTELLA: I think we have to absolutely understand that this is just a complaint, and these very serious allegations have yet to be proven. But there’s obviously a great conflict here in the political arena and in the intelligence services, in which Nisman felt that the president and her allies were going after his allies and himself in the intelligence service in terms of trying to remove them and block his case, and his criminal complaint was retaliation against that, based on what he felt was strong evidence. It remains to be seen. That case is being pursued. How strong the evidence he had and how serious the charges are in terms of being able to implicate powerful people up to the level of the president, that remains to be seen. Hopefully, this case will be different than others in the past, and we will actually see some clarity and some justice achieved.

AMY GOODMAN: Sebastian Rotella, I want to thank you for being with us, senior reporter for the investigative news website ProPublica. His latest piece, which we will link to, is headlined “Alberto Nisman and Argentina’s History of Assassinations and Suspicious Suicides.”

AMY GOODMAN: And that does it for our show. Today is the 19th anniversary of the first radio broadcast of Democracy Now! from the studios of WPFW in Washington, D.C. Now we broadcast on over 1,300 television and radio stations across the globe and reach millions of viewers and listeners through our website at democracynow.org. Go to our website to listen to our first program that aired the day before the 1996 New Hampshire primary. Thanks so much to our staff, our stations and our audience for making Democracy Now! possible.

Legendary Prosecutor Luis Moreno Ocampo on “Argentina, 1985” and Why Democracy Is at Risk Today 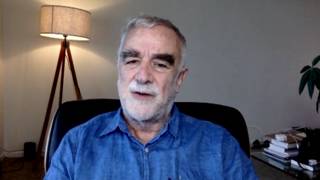 Legendary Prosecutor Luis Moreno Ocampo on “Argentina, 1985” and Why Democracy Is at Risk Today