In Wednesday night’s third and final presidential debate in Las Vegas, Donald Trump and Hillary Clinton sparred over abortion access and the future of Roe v. Wade. Trump claimed Roe v. Wade would be “automatically” overturned if he is elected, pledging to appoint anti-choice judges and saying that Roe v. Wade would eventually be decided by states. Trump also claimed, incorrectly, that some late-term abortions terminate pregnancies “as late as one or two or three or four days prior to birth.” Clinton responded, “That is not what happens in these cases.”

NERMEEN SHAIKH: Well, let’s go to one of the issues that was raised last night. This is debate moderator Chris Wallace.

DONALD TRUMP: Well, if we put another two or perhaps three justices on, that’s really what’s going to be—that will happen. And that’ll happen automatically, in my opinion, because I am putting pro-life justices on the court. I will say this: It will go back to the states, and the states will then make a determination.

HILLARY CLINTON: I do not think the United States government should be stepping in and making those most personal of decisions. So, you can regulate, if you are doing so with the life and the health of the mother taken into account.

CHRIS WALLACE: Mr. Trump, your reaction, and particularly on this issue of late-term, partial-birth abortions?

DONALD TRUMP: Well, I think it’s terrible. If you go with what Hillary is saying, in the ninth month, you can take the baby and rip the baby out of the womb of the mother just prior to the birth of the baby.

KRISTEN CLARKE: You know, first of all, we need to recognize that we’ve got an eight-member Supreme Court right now. Our highest court in the nation is broken and without a critical ninth member, needed to ensure that we can resolve some of the gravest issues that come before the court each term. You know, I am deeply concerned. You know, I heard one candidate last night talking about the Senate needing to do its job right now to recognize that there is a nominee pending for that vacancy: Merrick Garland. I heard one candidate talking about the need for the Senate to move right now on Garland’s vacancy. Come January, whoever is taking over the White House will have a constitutional duty and obligation to fill any vacant seats that may exist at that moment for the Supreme Court.

But an important part of the narrative right now needs to be, you know, the fact that we have a Senate that is about political obstruction. We have a Senate that refuses to move on the pending nomination of Merrick Garland and now thrusting the nation, you know, into a constitutional crisis. This is the longest period that we’ve gone without an unfilled Supreme Court seat. Throughout history, there have been vacancies that have arisen during presidential election years, and Congress has done its job to consider, provide advice and consent, is what the Constitution says. They’ve considered nominees. But the—you know, I’m deeply concerned about this era of obstruction, political obstruction, that we are in. As we look ahead for 2017, I think it’s important that we have a leader in place who can get us past this era of political obstruction and move the Senate to a place where it does its job, one of the most important of which is filling that vacant seat on the Supreme Court.

AMY GOODMAN: Kristen Clarke, we want to thank you for being with us, president and executive director of the Lawyers’ Committee for Civil Rights Under Law. This is Democracy Now! When we come back, more from the showdown in Vegas. And then we’ll bring you response from Dr. Jill Stein, Green Party presidential candidate, and a debate on how progressives should vote in November between Chris Hedges and Eddie Glaude. Stay with us. 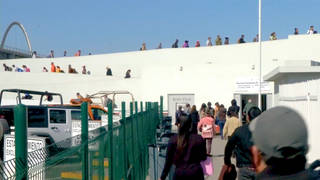