As we broadcast from Morocco, we speak with former U.N. High Commissioner for Human Rights Mary Robinson about an issue that is being largely ignored: Morocco’s 41-year occupation of the Western Sahara, a former Spanish colony located south of Morocco and north of Mauritania.

AMY GOODMAN: The U.N. Secretary-General Ban Ki-moon has raised it, called the Moroccan presence in the Western Sahara an occupation. I’m wondering your thoughts today about those that live under occupation and the more than 150,000 refugees in Tindouf, in Algeria, who want to come home, calling for a U.N.-sponsored referendum that would include self-determination. Your thoughts?

MARY ROBINSON: This has been a very long-running problem, as you know. It’s almost—there’s a kind of language of these parked problems that don’t move. And it is extremely difficult to see how there can be the kind of progress that would help in the situation. And, I mean, as you know, The Elders have also been very concerned about the Palestinian situation, and it is not improving. That’s why I find that words matter in our world today. And we should be talking about human solidarity, about working together for the security of a world of the Sustainable Development Goals, of the Sendai Framework, to make communities more resilient, of the Paris Agreement. But we need the solidarity. The developing countries must be able to develop. And I really feel very strongly that we need to be all the more determined. All the countries of the world must be determined with this agenda, with its value.

AMY GOODMAN: Do you believe that the people of Western Sahara should be able to determine their own future, that there should be a referendum? It has been a close to 42-year occupation.

MARY ROBINSON: Yes, in the sense that it has been a very long-running saga. I’m not somebody who has studied it with very close expertise, to be honest. I know that it is a big problem. And it does weigh on—and it weighs on the refugees that are in Algeria, as you say. It would be hope that there could be a breakthrough on it, but I don’t see it coming in the near future, I’m sorry to say. 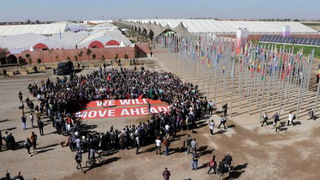