Former Rockette: Troupe Should Not Perform at Inauguration After Trump Has Degraded Women

Donald Trump’s Presidential Inaugural Committee has undergone a major shakeup in an effort to attract A-list celebrities to perform for the January 20 event. To date, only a few major performers have agreed to sign on. Donald Trump’s plans to attract celebrity performers to his inauguration suffered another blow over the weekend, after the company that manages the Radio City Rockettes said its members will be allowed to opt out of performing at the inauguration. The decision by the Madison Square Garden Company came after the union that represents members of The Rockettes initially said full-time members of the troupe were contractually obligated to perform at Trump’s inauguration. That prompted a firestorm of protest from the public, as well as from some current and past members of The Rockettes. We speak to Autumn Withers, who was a member of the Radio City Rockettes from 2005 to 2007.

AMY GOODMAN: We turn to the ongoing controversy around plans for the upcoming inauguration of Donald Trump. According to reports, Trump’s Presidential Inaugural Committee has undergone a major shakeup in an effort to attract A-list celebrities to perform at the January 20th event. To date, only a few major performers have agreed to sign on, well, like 16-year-old opera singer Jackie Evancho, the Radio City Rockettes and the Mormon Tabernacle Choir. Several others have turned down the opportunity to perform at the inauguration, including Céline Dion, Elton John, Garth Brooks, Andrea Bocelli. Last week, Saturday Night Live poked fun at Trump’s trouble attracting talent.

KELLYANNE CONWAY: [played by Kate McKinnon] I put together a list of people who have agreed to perform at your inauguration. It’s—

DONALD TRUMP: [played by Alec Baldwin] So many great names here, really. I love them both.

AMY GOODMAN: According to a report published in the entertainment publication TheWrap, the Trump team has even offered government posts and ambassadorships to talent bookers if they can deliver A-listers for the inauguration.

Donald Trump’s plans to attract celebrity performers to his inauguration suffered another blow over the weekend, after the company that manages The Rockettes said its members will be allowed to opt out of performing at the inauguration. The decision by the Madison Square Garden Company came after the union that represents members of The Rockettes initially said full-time members of the troupe were contractually obligated to perform at Trump’s inauguration. That prompted a firestorm of protest from the public, as well as some members of The Rockettes. One dancer, Phoebe Pearl, wrote on Instagram, quote, “The women I work with are intelligent and are full of love and the decision of performing for a man that stands for everything we’re against is appalling. I am speaking for just myself but please know that after we found out this news, we have been performing with tears in our eyes and heavy hearts. We will not be forced! #notmypresident.” Those are the words of Rockette Phoebe Pearl, who later deleted her message.

We’re joined now by two guests. Autumn Withers is with us, a former member of the Radio City Rockettes. And Itay Hod, who is a senior reporter for TheWrap, where he covers the intersection of politics and entertainment, his recent article headlined “Radio City Rockettes 'Appalled' over Trump Inauguration Command Performance.”

We welcome you both to Democracy Now! Autumn, you’re a former Rockette. What was your response when you heard the announcement that your former dance troupe was going to be performing for Donald Trump, for the inauguration?

AUTUMN WITHERS: Yes, well, thank you for having me. My first reaction is I had a heavy heart, and I felt very disappointed. The Rockettes represent a legacy of strong, intelligent and classy women, and that really embodies the Rockette brand. So to associate this with Mr. Trump, who has a public history of degrading women, objectifying women, in my opinion, really tarnishes what The Rockettes embody and stand for. It cheapens these women and also what they represent to other women, girls and aspiring dancers across North America. So I was—I was really outraged, initially.

AMY GOODMAN: Could you say this if you were dancing now?

AUTUMN WITHERS: No, I could not. No.

AMY GOODMAN: Why? What are the rules?

AUTUMN WITHERS: When you are an active Rockette, any interview with media must go through proper channels of their internal PR department. It’s orchestrated through them if you are going to speak about anything related to the Rockette brand.

AMY GOODMAN: So, talk about your union, the American Guild of Variety Artists. AGVA?

AMY GOODMAN: Which initially sent the email to members of The Rockettes, that was leaked, that said Rockettes are obligated to perform at Donald Trump’s inauguration. What was your reaction to that statement?

AUTUMN WITHERS: Anger, because I felt that the union wasn’t protecting The Rockettes. And I understand that they were, you know, outlaying the terms of the contracts that the 12 full-time Rockettes have, but I really feel that, you know, AGVA represents a community of artists and that they should really put the artists first and that no performer should have to perform at a public event that just goes against their will and everything that they stand for.

AMY GOODMAN: And how much dissent is there among your colleagues and former colleagues, the dancers?

AUTUMN WITHERS: Most of my colleagues and The Rockettes who I still know who are still active and currently performing with the line right now, they’re opposed to performing at the inauguration.

AMY GOODMAN: Now, the answer to that is: We have plenty of dancers who have signed up voluntarily. Do you believe that?

AUTUMN WITHERS: I think that that’s a really multilayered and complex question, and here’s why. You know, when you are a Rockette, you are part of—you’re part of a corporation. You’re an employee of a corporation. You have less of an artistic voice, let’s say, than you might have as being a part of a Broadway show or a member of like a ballet company, let’s say. So, anything that is asked of you by your employer or by executives who want you on stage in Washington, you will feel an individual pressure to accept that. And everything that you do while you’re employed plays into being rehired, when you do have to reaudition at the end of every year. So, individually, yes, I think these women are feeling pressure, even though it has been publicly announced that it is voluntary. And in regards to that specific statement that Madison Square Garden’s released, I think that that might have been more in an interest—like an email of inquiry sent out to The Rockettes, saying, “Would you be willing to think about this or be considered pending more details?”

AMY GOODMAN: Is there discussion of Rockettes who do accept and go to Washington doing things like, I don’t know, taking a knee, like athletes do around the pledge of—around the national anthem?

AUTUMN WITHERS: You know, I—honestly, I don’t know, and I can’t speak to that. I think now that it’s been made voluntary, you know, I would just simply withdraw. I think if I was in the line and was forced to do it, it is definitely something that I would consider doing, yeah.

AMY GOODMAN: Itay Hod, talk about what you have found in doing your reporting for TheWrap on this particular issue, before we go on to what has been dangled before agents and A-list celebrities to do the gig. But talk about what you found with the response to the announcement last week that The Rockettes would be performing.

ITAY HOD: Yeah, so, I think I agree with your guest, is the fact what we’re hearing, at least—I’ve spoken to at least one insider, who told me that the worry right now is, yes, officially, it is voluntary. But the question is: If you don’t volunteer, what happens? Right? So, a lot of the women are perhaps worried that if they don’t volunteer, that may affect their chances of getting rehired next year. So, the question now is: Is that really voluntary, or is that just for saving face? So now that’s really the issue right now. And I know that some people, at least, within the group are worried about that.

AMY GOODMAN: And this discussion of Donald Trump’s own admission of sexually assaulting women, talk about how that has weighed in, Itay Hod.

ITAY HOD: Well, yeah, that’s really the basis of the issue here, right? You’re going to have a lot of women who are essentially dancing in front of a man that has not only been bragging about possibly sexual assaulting women, but has also been accused by several women—well, about a dozen—who say he did exactly just that. So, I can imagine how uncomfortable just the idea of having to perform in front of someone like that, when you’re obligated to do it and you don’t really want to.

And, you know, out of the 72-so dancers—right?—they have 36 dancers for one troupe, the day troupe, and then there’s 36 dancers for the night troupe—there’s about 13, I believe, dancers right now who are contractually obligated to perform. So, everything else is voluntary. It’s sort of like a freelance gig, if you will. The question was: What happens to those 13 women who are obligated to perform whenever the troupe is assigned to perform somewhere? And what happens to the rest of the women, who may not be obligated, but may feel pressured to volunteer because they’re worried that they may not be hired next time? So, that really was the basis of the issue.

The union did not side with the dancers at first, and then later came—after a lot of pressure from the reporting done by TheWrap, by several other places, including BroadwayWorld.com and Perez Hilton, who did some incredible work, because of the pressure, that sort of bubbled up to the surface, and the statement from Madison Square Garden came out. So, the statement came out, and the media sort of dropped the story. Now the question is: Is there still an issue, or is the issue over with? I don’t believe it’s over with. I think a lot of the women there are still feeling the pressure. And the question is: What has Madison Square Garden done to make sure that these women don’t feel like they have to volunteer if they don’t want to, that they won’t be punished or won’t suffer any repercussions if they don’t come forward and volunteer?

Did Trump Team Offer Ambassadorships in Order to Lure Celebrities to Perform at Inauguration? 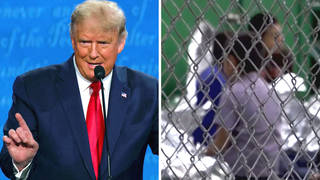