AMY GOODMAN: Congressmember Gutiérrez, I want to ask you about Puerto Rico before we go. Last week, Republican Oklahoma Senator Jim Inhofe recommended reopening the U.S. military base on Vieques in Puerto Rico, as Congress considers legislation to address Puerto Rico’s debt crisis. For decades, the Navy used nearly three-quarters of Vieques for bombing practice, war games, dumping old munitions, leading to lasting environmental damage, napalming the island. The Navy ended training operations in 2003, following massive civil disobedience. Senator Inhofe said reopening the base at Vieques would benefit the U.S. military and the Puerto Rican economy. I want to play for you what he said.

SEN. JIM INHOFE: I would think that any kind of a deal that is made is going to have to include consideration for the training that is still available. I mean, there’s still no range like Vieques anywhere in the Western Hemisphere. What can be done in Vieques cannot be done on one location by a joint force.

REP. LUIS GUTIÉRREZ: Well, first of all, Amy, the last time the federal magistrate sentenced me to a year of probation, they were very clear that if I participated once again in protesting in Vieques and trespassing on federal lands there, that I would be sent to jail. Should they ever open that, I will protest, along with thousands of others, to stop the bombing of Vieques. We’ve won that fight and that battle. If they want, they can bomb the coast of Florida. They can bomb the coast of Georgia. They can bomb a lot of different coasts. But what does the senator say? “Oh, no”—from Oklahoma—”Let’s not bomb Oklahoma. Let’s just bomb those poor Puerto Ricans, because that’s a perfect place that we can do it.”

Rep. Luis Gutiérrez on “Hamilton” Pulitzer: When We Get to Write, the Script is Very Different

NEXTRep. Luis Gutiérrez on “Hamilton” Pulitzer: When We Get to Write, the Script is Very Different 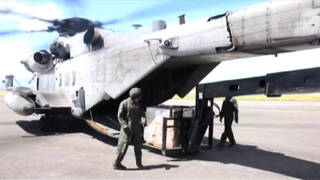