As hundreds of thousands of people marched and rallied one year after the historic Women’s March protesting President Trump’s inauguration, protesters braved a snowstorm and freezing temperatures in Park City, Utah, at the Sundance Film Festival to take part in a Respect Rally. We spoke with actress Tessa Thompson at the rally, known for her roles in “Dear White People” and “Selma,” and most recently for playing superhero Valkyrie in the movie “Thor: Ragnarok.”

AMY GOODMAN: During the rally, I also interviewed the actress Tessa Thompson, who you may know from her roles as the superhero in the film Thor or playing Samantha “Sam” White in Dear White People or performing as Diane Nash in Selma. I spoke to her just after she addressed the Respect Rally.

TESSA THOMPSON: Hi. I know who you are.

AMY GOODMAN: Oh, my god! Well, I know who you are.

TESSA THOMPSON: Are you kidding? I know who you are.

TESSA THOMPSON: I mean, it’s—you know, it’s incredible to be here. I think that, you know, a lot of movement has happened since then, and, in many ways, not enough. I think until we can really create systemic change, in legislation, in policy, we’ll continue to march. And that was something that was echoed by Jane Fonda and Gloria Allred. Like, I think that’s where we are. And so, I was really spirited to hear particularly the words of Jane, helping us understand the ways in which it’s important to organize, because I feel like we’re in such a cultural moment sometimes that—particularly in this media space that we live in, where you can feel like retweeting or hashtagging is enough, and I think we really need to get to a place of understanding, and, you know, in a real way, with our friends and our family, what we can do, how we can really create change.

AMY GOODMAN: Talk about this civil rights leader and what—this kind of activism, from a half a century ago, if we’re seeing it expressed today.

TESSA THOMPSON: We’re seeing it expressed. The thing that was so incredible about Diane and every leader that I spoke to that’s still alive that could tell me about Diane—of course, I got to meet her, as well—is just how radical she was, you know, that she really felt like an important component of creating real change is tension, that she wasn’t afraid of it, to create it even with the people that she collaborated with. And that kind of bravery and real dedication to getting to the core of an idea, I think, is so fantastic, particularly in a political space. And so I was continuously struck by that. And she is that way still. I mean, she has such fierce integrity and really believes in America, so much that she can be quite critical. And that’s, I think, what we need.

AMY GOODMAN: And now you are a black woman superstar in Thor. Talk about your message to young women in the world.

TESSA THOMPSON: I think what’s really been incredible about that, obviously, the character Valkyrie has not historically been a woman of color, although she is—in the context of the comics, she is depicted as sometimes a bisexual, so she’s a queer woman. But it’s been incredible to see young women come up to me and say that it means so much to them because they can see themselves reflected in a film like that. And I think, for me, you know, when I first got the part, I couldn’t believe it. And I think a part of that is because I had not seen it before. And so, I think that’s where representation in media is really important. It’s important that when people are ingesting their popcorn, they’re also ingesting images that make them feel hopeful about their sense of possibility.

When we come back from break, we will look at RBG, a new documentary about the life of Supreme Court Justice Ruth Bader Ginsburg, who’s here in Park City, as well. Stay with us. 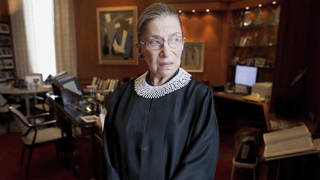