On Saturday in Washington, D.C., Parkland shooting survivor Emma González took to the stage at the massive March for Our Lives and stood behind the podium in silence for four minutes as she fought back tears. It’s being called the loudest silence in the history of U.S. social protest. We air her historic speech.

AMY GOODMAN: Emma González’s silence would last for four minutes and 26 seconds, in what’s been described as the loudest silence in the history of U.S. social protest.

EMMA GONZÁLEZ: Since the time that I came out here, it has been six minutes and 20 seconds. The shooter has ceased shooting and will soon abandon his rifle, blend in with the students as they escape, and walk free for an hour before arrest. Fight for your lives, before it’s someone else’s job.

AMY GOODMAN: Mass shooting survivor, 18-year-old Emma González. We’ll be back with our coverage of the March for Our Lives in a minute.

AMY GOODMAN: “Found/Tonight,” performed by Lin-Manuel Miranda and Ben Platt on the stage of the March for Our Lives.

Voices from the Mass Shooting Generation: Youth from Around Country Descend on D.C. to Demand Change

NEXTVoices from the Mass Shooting Generation: Youth from Around Country Descend on D.C. to Demand Change 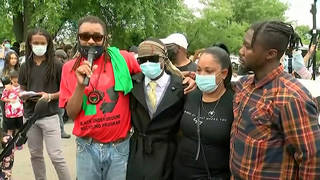 “In Our DNA”: Jacob Blake’s Father & Uncle on the Family’s Long History of Racial Justice Activism