Dr. Christine Blasey Ford’s sexual assault allegations against Brett Kavanaugh have cast doubt on whether President Trump’s Supreme Court nominee will be confirmed by the Senate. “The process was bad from the beginning,” says Rev. Dr. William Barber, co-chair of the Poor People’s Campaign and president of Repairers of the Breach. “We are poised to have two presidents that did not win the popular vote, now will have appointed four extreme members to the Supreme Court.” Barber says Kavanaugh will be dangerous to voting rights, to labor rights, to healthcare and to women’s rights.

StoryJun 13, 2018Special Report: In the Streets with the New Poor People’s Campaign Against Racism and Poverty

AMY GOODMAN: This is Democracy Now!, democracynow.org, The War and Peace Report. I’m Amy Goodman. We’re going to turn right now to the Reverend William Barber. We’re speaking to him in North Carolina, and we originally had him on to talk about the hurricane. But before we go to that, Dr. William Barber, I wanted to ask you about—I wanted ask you about Judge Kavanaugh. You held a news conference opposing Judge Kavanaugh’s confirmation to the Supreme Court well before Dr. Blasey Ford spoke out and said that he had attempted to rape her when they were both teenagers. I was wondering if you would share your thoughts at this point, both on this latest controversy and why you’re so vehemently opposed to Judge Kavanaugh taking a seat on the Supreme Court.

REV. WILLIAM BARBER II: Well, thank you so much, Amy, for this opportunity. Before all of the latest news, Judge Kavanaugh, first of all, was being put forward after McConnell in the Senate held open a seat for over 420 days, in a way that we had not seen since the Civil War. They literally denied a president his right to nominate someone and for them to have a hearing. This was the same Judiciary Committee that denied two African-American women a hearing to be appointed to the federal court, the 1st District—Eastern District in North Carolina. So the process was bad from the beginning.

Secondly, what we are seeing now, if we look at George Bush and now Donald Trump, we are poised to have two presidents that did not win the popular vote now will appoint—will have appointed four members to the Supreme Court, four extreme members to the Supreme Court. We already have a Supreme Court that rolled back the Voting Rights Act. Kavanaugh, we believe, will be dangerous to voting rights, to labor rights, to healthcare and to women’s rights. And that was exposed in the hearings of what he would not answer and what he would not say was settled law. For instance, Senator Kamala Harris asked him, “Was Section 2 of the Voting Rights Act settled law?” Section 2 says—it’s basically the protection that says no state can engage in discriminatory practices as it relates to voting and voting rights. He did not answer that question. He could not even say yes on something as fundamental as voting rights. So he was a dangerous, if you will, nominee already.

Now that this has come out—and I’ve been thinking about it in a number of ways. Number one, this lady did not intend to come out. Dr. Ford, she—it was leaked. And she has asked for a FBI investigation. That’s strange for someone that the extremists, who call them Republicans, are trying to say she’s lying. But be it as it may, it’s all alleged. I heard Michael Moore mention a minute ago about the feminist side of this, the woman’s side of this agenda. Let me flip this over. Imagine Obama nominating a black or a Latino man for the Supreme Court, and an accusation comes up that that black or Latino man had attempted to rape a teenage girl. Imagine that for a minute, and imagine what the Republicans would be doing if in fact that was the scene that we’re dealing with now. Here they are having a white man for the Supreme Court nominee accused of raping—attempting to rape a white woman, and they are already forming an opinion and wanting to refuse to even give her an FBI investigation. This is nothing but the gangsterization of our politics and our political systems, and people in America must stand up against this entire process, because it is a direct—it’s contrary to our fundamental values. 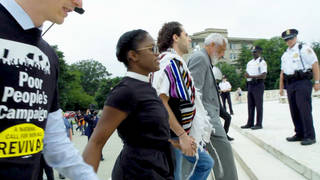 Special Report: In the Streets with the New Poor People’s Campaign Against Racism and Poverty