Bernie Sanders Spurs Debate on Prisoner Voting Rights, But the Idea Is “Not as Radical as It Seems”

Presidential candidate and Vermont Senator Bernie Sanders said at a town hall Monday that he believed in restoring voting rights for prisoners, sparking a national discussion about re-enfranchisement for the more than 2 million Americans behind bars. Presidential hopeful Pete Buttigieg has spoken out against prisoner voting rights, while Senator Elizabeth Warren said “I’m not there yet” on the issue. Senator Kamala Harris said “there has to be serious consequence for the most extreme types of crimes,” referencing her background as a prosecutor. We speak with Ari Berman, senior writer at Mother Jones, about the public debate on voting rights for imprisoned Americans. Berman notes that prisoners are currently counted in the U.S. census in the counties where they are imprisoned, despite not being allowed to vote in most states.

AMY GOODMAN: I want to turn to this issue of voting rights for prisoners, which has sort of exploded on the scene this week, though it’s been an issue for a long time, because, on Monday, presidential candidate Senator Bernie Sanders was asked about it during a CNN town hall, if prisoners, like the Boston Marathon bomber, should be allowed to vote while locked up.

SEN. BERNIE SANDERS: As it happens in my own state of Vermont, from the very first days of our state’s history, what our Constitution says is that everybody can vote. That is true. So people in jail can vote. Now, here is my view. If somebody commits a serious crime—sexual assault, murder—they’re going to be punished. They may be in jail for 10 years, 20 years, 50 years, their whole lives. That’s what happens when you commit a serious crime. But I think the right to vote is inherent to our democracy. Yes, even for terrible people, because once you start chipping away and you say, “Well, that guy committed a terrible crime, not going to let him vote,” or “That person did that, not going to let that person vote,” you’re running down a slippery slope.

AMY GOODMAN: Of course, Senator Sanders comes from Vermont, where prisoners can vote, as can Maine. During another presidential forum that night on CNN, presidential candidate Pete Buttigieg, the mayor of South Bend, Indiana, came out against voting rights for prisoners.

MAYOR PETE BUTTIGIEG: Part of the punishment, when you’re—when you’re convicted of a crime and you’re incarcerated, is you lose certain rights. You lose your freedom. And I think, during that period, it does not make sense to have an exception for the right to vote.

AMY GOODMAN: And CNN’s Don Lemon put the question to Senator Kamala Harris of California during her presidential town hall that night.

SEN. KAMALA HARRIS: I think we should have that conversation.

AMY GOODMAN: So, she said, “I think we should have that conversation,” Monday night. But on Tuesday, Senator Harris said, quote, “I’m a prosecutor. I believe … there has to be serious consequence for the most extreme types of crimes,” unquote. Senator Elizabeth Warren has also weighed in about allowing prisoners to vote. Speaking at an event in South Carolina, she said, quote, “I’m not there yet.” Ari Berman?

ARI BERMAN: Well, this really is not as radical as it seems. As you mentioned, two states—Vermont and Maine—already allow prisoners to vote. Virtually every other industrialized democracy in the world allows prisoners to vote.

And it’s not about whether terrible people should lose all of their rights or be punished. It’s about whether you lose fundamental citizenship just because you did one thing wrong. And it’s interesting. Prisoners are already counted for redistricting purposes, so they are already counted where they are incarcerated, but yet they’re not allowed to vote. So it doesn’t make a whole lot of sense. And if you believe the purpose of prison is not just punishment, but rehabilitation, then allowing people to still have one of their most fundamental civic responsibilities is a key aspect of rehabilitation.

So I’m glad that we’re having this conversation. I hope it’s not demonized in the way that many media are talking about it, saying, “Should the Boston bomber be allowed to vote?” That’s incredibly disingenuous. That’s not the conversation we should be having. It’s about should millions and millions of people be stripped of their fundamental rights. And I think that’s the question we need to be having in this country.

JUAN GONZÁLEZ: Of course, the decision has to be made state by state, right? It’s basically the states who decide who gets to vote in their area.

ARI BERMAN: The states decide this. And like with a lot of things, the president is not a king. OK? We have to remember that.

ARI BERMAN: So, people think that the presidential candidates can just wave a magic wand and do everything. But right now 6 million people can’t vote in this country, either because they’re behind bars or even when they get out they still can’t vote. And the question is: Should voting be a fundamental right for everyone, no matter what you do, or should it be something that’s restricted to one segment of the population or another? And what Bernie Sanders is saying is that if you go down that road, deciding some people can vote and not others, that’s just going to lead to wider and broader disenfranchisement.

AMY GOODMAN: Well, we want to thank you both for joining us. Ari Berman is senior writer at Mother Jones, author of the book Give Us the Ballot: The Modern Struggle for Voting Rights in America. And Thomas Saenz is president and general counsel of MALDEF, the Mexican American Legal Defense and Education Fund, speaking to us from Los Angeles. MALDEF is representing plaintiffs in one of the lawsuits challenging the census citizenship question.

This is Democracy Now! When we come back, we’ll be joined by the Nobel Prize-winning economist Joe Stiglitz. His new book, People, Power, and Profits. Stay with us.

Economist Joseph Stiglitz: Capitalism Hasn’t Been Working for Most People for the Last 40 Years

NEXTEconomist Joseph Stiglitz: Capitalism Hasn’t Been Working for Most People for the Last 40 Years 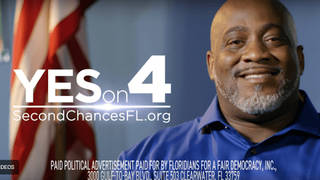