As the Senate reconvenes today, Majority Leader Mitch McConnell is demanding that Congress use the next stimulus bill to protect corporations from liability for workers. “He wants to protect their right to engage in egregious misconduct,” says Robert Weissman, president of Public Citizen.

AMY GOODMAN: This is Democracy Now! The Quarantine Report. I’m Amy Goodman. As meatpackers around the U.S. face increasingly dire conditions, overwhelmingly immigrant and people of color, Republican lawmakers are ramping up their defense of corporate interests in the companies where workers are falling ill. The Senate reconvenes today. Majority Leader Mitch McConnell is demanding Congress use the next stimulus bill to protect corporations from liability from workers who get sick with the coronavirus. This is McConnell speaking on Fox News.

MAJORITY LEADER MITCH McCONNELL: We have brave healthcare workers battling this virus, entrepreneurs who will reopen their economy, all of whom deserve, in my view, strong protections from the opportunistic lawsuits that are being planned all over America, all over America. The lawyers, trial lawyers, are sharpening their pencils to come after healthcare providers and businesses, arguing that somehow the decision they made with regard to reopening adversely affected the health of someone else.

Robert Weissman, thanks so much for joining us. We’ve been talking about the meatpackers. Of course, this extends beyond the meat plants. But can you talk about what Mitch McConnell is demanding? And is he actually holding the stimulus 4 package up to insert this in?

ROBERT WEISSMAN: Mitch McConnell is talking about trying to have total immunity for big corporations for really anything that’s remotely connected to the coronavirus crisis. He’s reconvening the Senate today, he says, for the purpose of granting immunity to big corporations, and he says won’t let the next to stimulus-slash-relief bill go through unless it includes provisions to protect big corporations from lawsuits.

This is not just about, although it’s especially about, protecting employers from lawsuits for endangering their workers; it’s also about lawsuits protecting companies from endangering their workers. It probably means protecting corporations from lawsuits over environment pollution, maybe even violations of the civil rights law, fair wage law and even more. This is a long-term agenda of the Chamber of Commerce and big business. Mitch McConnell sees an opportunity with the coronavirus to capitalize. And he’s trying to get broad immunity for corporations for all the kinds of wrongdoing they might commit during the period of the crisis.

AMY GOODMAN: So, talk about exactly what this would mean. I mean, when a corporation stays open, like one of these meatpacking plants, where they’re not provided — the workers are not provided with the proper protective gear, they often, for months, have not had tests, but if they don’t come to work, they’ll be fired, so their livelihoods are at stake. They have no recourse?

ROBERT WEISSMAN: Well, that’s what McConnell would like. So, in fact, for workers, workers don’t have much recourse anyway for dangers at the workplace. If you’re injured or become ill at the workplace, you’re entitled to workers’ compensation. It’s just a straight insurance system. So you get paid for your time off, some portion, and compensation for your healthcare and any injury you may suffer. But you can’t sue companies in court, normally. The only time you can sue a company in court for an injury or exposure to an illness is when they engage in egregious misconduct, reckless endangerment of the workers. So, when McConnell says he wants to protect the companies from lawsuits, he mostly means he wants to protect their right to engage in egregious misconduct.

There’s one case that’s going on right now in Missouri that’s slightly different, involving meatpacking workers. There, the workers are not suing for money damages. They’re suing for injunctive relief to force the Smithfield meatpacking plant to adopt the sensible, minimal standards needed to protect workers who are going to be required to go to work, to give them the protective equipment they need, to make sure there’s adequate sanitation, extended breaks, that they get adequate sick leave, that there’s testing and, crucially, that there’s sufficient distancing at the production line. That’s the lawsuit that is the primary one that companies and Mitch McConnell are focusing on. It doesn’t even ask for any money. It only asks Smithfield to protect its workers.

AMY GOODMAN: So, Trump’s executive order gives these plants — does it give them legal immunity? Can you talk about — well, Mother Jones had this piece, saying, “Hours before publishing her Bloomberg story, [reporter Jennifer] Jacobs asked Trump what steps he would take to bolster the food supply under strain from COVID-19. His answer focused on the meat industry — and in particular Tyson Foods. 'He told us he will do an EO [executive order] to help Tyson Foods with a “liability” problem.'” Rob Weissman?

ROBERT WEISSMAN: Right. So, Trump did issue an executive order talking about the central importance of meat production to the U.S. food supply. It does not, in fact, confer immunity on corporations. And Trump cannot do that under existing law on his own. It does say companies should, if they’re sued, invoke his executive order and say, “See, the president says we have to stay open.” And in fact, Smithfield is doing that now in the Missouri case. But it does not give them immunity. For them to get immunity, they’re going to need a law passed by Congress. And that’s exactly what Mitch McConnell is trying to do.

AMY GOODMAN: Rob Weissman, I want to thank you for being with us, president of Public Citizen. And, of course, we’ll come back to you on many other issues. 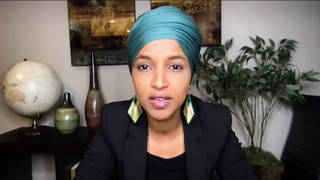